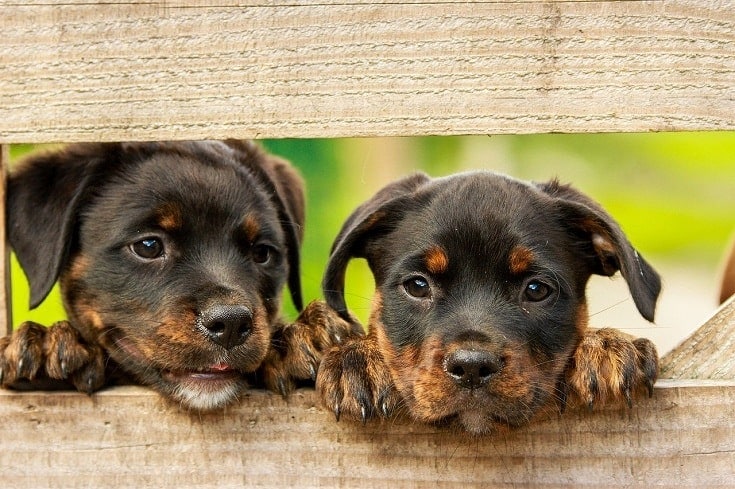 Certain dog breeds have iconic looks or markings that set them apart from the rest. You’ll see an image or pass one walking, and you have no doubt in your mind what kind of dog it is. Black and brown coloring gives way to some of the most recognizable dogs we see today. Many of them were bred in Europe over the centuries. The exact time frame of this coloration is not explicitly dated. However, there have been mosaic art pieces as far back as 200-100 BC depicting this color scheme in domesticated dogs.

We rounded up 13 breeds that have both colors in their coats. Some of them have defined patterns, while others have a combination. It’s quite interesting to see how much two primary colors can transfer in the dog world.

The gorgeous black and brown coloring of the Rottweiler should be an all-too-familiar sight. These dogs have built quite a reputation since their original departure from Germany. While not all the publicity is good, these are pretty remarkable dogs. They make excellent guard, watch, and herding dogs. This is a substantial breed, and they are also incredibly protective of their people and property. Though they are labeled as high bite risks, they are just defensive of what’s theirs.

Living 8-10 years on average, they don’t have high numbers in terms of longevity. This is a common theme with larger breeds, as unfortunate as it seems.

This black and brown dog looks like he means business. Dobermans are another German breed whose trademark is their pointy-cropped ears. Because of their mass, muscular exteriors, and intimidating stance, these dogs may look like they are incredibly aggressive. While they may not hesitate to defend their families against a threat, making them courageous and active guard dogs, they aren’t as rough around the edges as they seem.  Dobermans are highly intelligent, loving, and even clumsily silly sometimes.

In terms of large dogs, they have a moderately impressive lifespan. They live an average of 10-13 years.

Another common brown and black dog breed you may think of right away is the impressive German Shepherd. This dog is so amazing that they rank in the top three for breed popularity in the US. They are terrific family dogs, guard dogs, working dogs, and service dogs. Their purpose is immensely versatile, making them ideal for many roles. These dogs are cooperative, protective, fiercely smart, and exhibit optimal self-control. These traits make them excel in virtually any task you give them.

The German Shepherd has a lifespan of 9-13 years, which is a large range. That is likely because of various health issues that may or may not plague the individual dog.

Black and Tan Coonhounds are impressive hunting dogs with a very sensitive nose. This dog breed was developed in the United States and excelled in hunting vermin. When they are on the hunt, they are intensely focused with nothing to distract them from the scent trail. However, when they’re off the job, they are wonderfully laid back and mild-tempered. They don’t make good guard dogs because they’re friendly with all people. While welcoming with humans, they may not share the sentiment with smaller animals due to their prey drive.

These flop-eared sweethearts live 10-12 years on average. They are generally healthy, hardy dogs who thrive outdoors.

From Southern Africa, the sleek and muscular Rhodesian Ridgeback came into existence through the cross-breeding of several dogs. They were once known as “lion hunters”. However, these dogs could actually take down a lion on their own. As pets, these stubborn dogs are too smart for their own good sometimes. They’re terrific companion animals for energetic lifestyles and children. They can go one way or another when it comes to strangers. Do be sure to have a secure enclosure with these guys, because their prey drives make it all too tempting to go after smaller animals.

These beauties live an average of 10-12 years total. They are not likely to suffer from major health issues, but deafness is a common problem in late years.

The gorgeous Beauceron is the next black and brown dog breed on our list, and is a rare sight to behold. They were originally given jobs as guard dogs, herders, and hunters. Declaws, which are the thumb-like appendages on the upper inside of a dog’s leg, is unique in this breed. Instead of having the standard singular dewclaw, they have double. They make loyal and devoted companion animals. They tend to be dominant with other dogs, especially of the same sex. Early socialization and exposure to other animals as a puppy can potentially make this avoidable.

This herding dog lives an average of 10-12 years. While they may suffer certain heart conditions, they are overall a generally healthy breed.

These dogs look nearly like clones of their Doberman cousins. However, they are quite a bit smaller and a tad thicker throughout the chest. They can also have a tan coat without any black markings. As puppies, they must have proper guidance due to their keen intelligence. They may just try to outsmart their owners if you allow them. However, this lively breed is a family dog who adores their housemates. Because they may have bossy or overbearing tendencies toward other creatures, early introduction is critical to avoid any aggression as an adult.

Slightly smaller but very similar to the German Shepherd, the Malinois is a breed of high agility and supreme intelligence. They tend to be moderately high strung and they don’t fare well without a job to do. These dogs are best for people with highly active lifestyles or work purposes. Because of how seriously they take their given duties, they make incredibly efficient police dogs. They’re heavily protective and territorial, so appropriate training and proper physical exercise are essential to avoid bad behavior.

The Malinois lives roughly 12-14 years with no major issues to speak of. These dogs can have epilepsy as a result of genetic bloodline issues, so having a reputable breeder is a must.

This lovely long-haired Belgian Tervuren is another serious—even aloof—brown and black dog. They are fabulous watch or guard dogs, keeping an eye on his or her territory. They are loving with family and do very well when they’re raised with children and other pets. Because of their natural herding instincts, they may nip at your heels— but this is not an act of aggression. They aren’t a breed that handles being cooped up all day. They must have frequent socialization and stimulation to avoid separation anxiety and destructive behavior.

These dogs live an average of 12-14 years. They may suffer from health problems, but you can avoid these issues by buying from reputable breeders with knowledge of bloodlines.

Otherwise known as the wiener dog for obvious reasons, Dachshunds are another black and brown dog. These long-bodied cuties are full of personality and good looks. They are another German dog trained to hunt tunnel animals. Their long torsos and short legs help them navigate through burrows to capture underground dwellers. They’re incredibly spirited and full of adventure. They really like to eat— a lot! You can’t let them. Becoming overweight can hurt their long backs.

Dachshunds can life an average of 12-16 years. This is greatly dependent on giving them proper care, exercise, and an appropriate lifestyle.

The Chihuahua is a Mexican dog who also has several coat variations— black and brown being one of them. These dogs have been among the most pampered toy breeds of all time. They are carried in purses, dressed in tiny outfits, and their nails are even painted sometimes. While they’re little and cute looking, they may suffer from little dog syndrome and give you a not-so-gentle nip to warn you to back off. They’re incredibly affectionate toward their owners but are very likely to only bond to one person.

Chihuahuas have an impressive lifespan of up to 20 years! They are one of the longest living breeds today.

This miniature version of their Doberman big brothers may just think they’re the biggest of all. When it comes to movement, this breed doesn’t know how to stop. They are super active, typically hyper, and always ready to romp around. Because they feel they’re so large and in charge, they tend to boss bigger dogs around and chase smaller animals. Most of them can’t be trusted off the leash, either. They rule all and won’t bother coming back to a calling plea. But they do love snuggles and cuddling in bed with their humans. Miniature Pinschers have impressive lifespans as well, living an estimated 15 years average.

This little Lancashire Heeler is another long-bodied brown and black dog with short legs. They look much like their Corgi cousins, but they are unique in their own way. Because they are bred for herding in all elements, they have water-resistant coats. Their purpose causes them to be very energetic and vigorous. They do very well with families but may just love the outdoors more. Having lots of room for this breed to roam is the key to their happiness. They’re brilliant, but on their terms, so training with firmness is crucial.

It’s quite interesting to see the differences in breeds that share the same coloring. Producing strong bloodlines and stable breed traits is something that took patience, perseverance, and determination. But thanks to humans throughout history, we can admire these black and brown dogs for the beauty they have even still today. 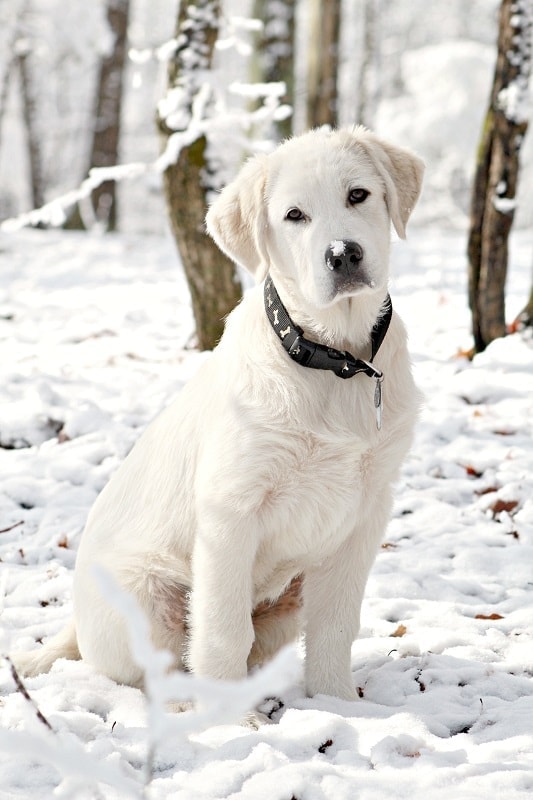 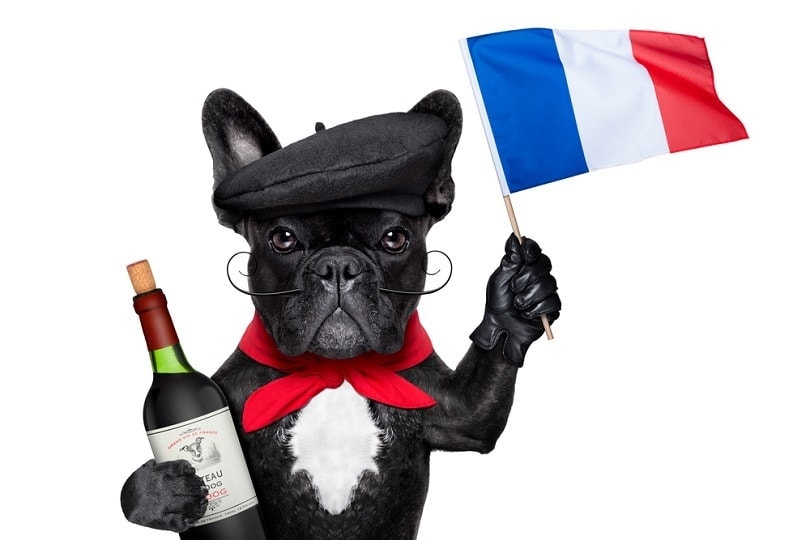 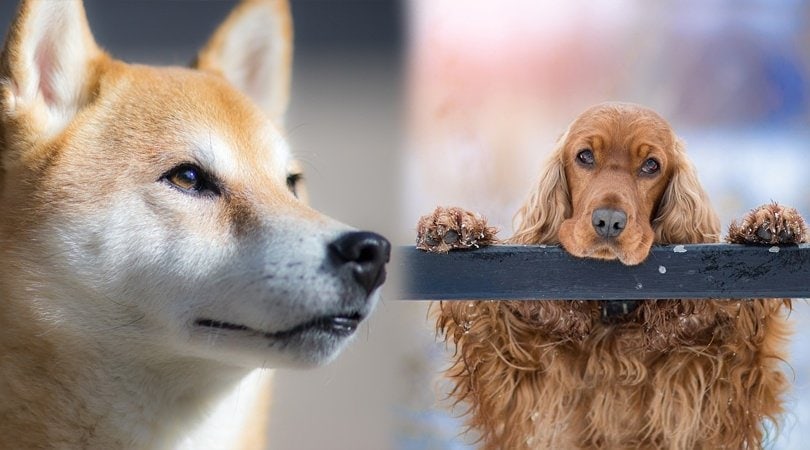