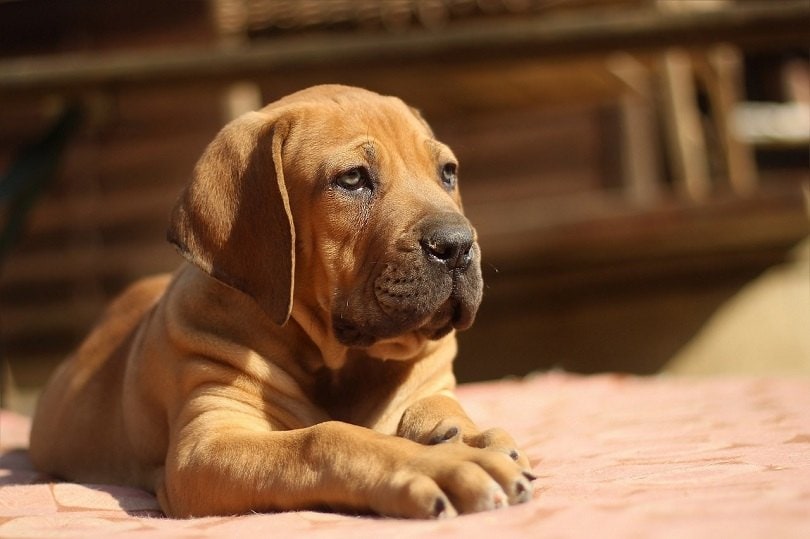 The Boerboel originally came to be when 17th-century Dutchmen moved to and settled in South Africa. They bred them to be protective dogs, guarding the farmer’s land, family, and livestock from the deadly wildlife, such as hyenas and lions. The name Boerboel is an Afrikaans word that roughly means “farmer’s dog.”

The Boerboel is part of the Mastiff family and is also called the African Boerboel or the South African Mastiff. They appear rather intimidating due to their compact and bulky size. Even with their breeding, though, they can be an incredibly loving dog. Due to their protective nature, they are a perfect match for children, being very playful and loyal to their protectees. Tolerant even of being climbed on, they soak up attention from their owners.

High-quality training is critical to the ownership of the Boerboel. It is an energetic dog with strong guard dog instincts bred into them. This breeding can be beneficial if you need a protector, but it is difficult if you have visitors frequently. They need a firm hand to train them with consistency, not to end up causing injury to others.

Boerboel Puppies – Before You Buy…

What’s the Price of Boerboel Puppies?

If you’re in the market for a Boerboel puppy, you’re likely wondering “what do Boerboel puppies cost?” Well, due to the specific breeding of the Boerboel puppies, the price for them lies between $1,500 and $2,000. This price will depend on the breed, their reputation, and the pedigree of the parents.

1.  The Boerboel is a blend created from European and African breeds.

This “farm dog” was initially made through the combination of continental and African breeds to make it the perfect South African protector. It is theorized that these breeds included the Rhodesian Ridgeback, Bullmastiff, and Bulldog, all of which are commonly used as aggressors or protectors.

2.  This dog was initially brought to South Africa by the founder of Cape Town.

Some people think that the dog was initially bred in South Africa, while others believe that it was first brought there by Jan van Riebeeck. He was the founder of Cape Town and supposedly brought the dog to protect the Dutch farmers from the formerly unknown vicious predators they encountered in the region.

By all reports, this dog should be a lean, mean, protecting machine. However, it is a softie underneath the many layers of muscle. These dogs need human companionship every day, suffering from anxiety or other adverse emotional developments if left alone. This need for company is why they are suitable for large families that will be able to spend consistent time with the dog, working or playing.

Temperament & Intelligence of the Boerboel

Not known for its intelligence, the Boerboel is a smart dog that can discern between danger and just a stranger quickly. They do not attack at random; thus, they don’t have a reputation for aggression even though they are bred to protect.

These dogs have a solid ethic and are able to toil with the best of them. They excel in home situations in which they have tasks to complete. They excel at guarding livestock, or anything protective in nature (even when they are Boerboel puppies). However, if you don’t need them for these purposes, then consider engaging them in dog sports. They have a competitive nature and often surpass expectations.

The Boerboel is not the best fit for a first-time dog owner due to its very confident nature. If he doesn’t have someone to train him that he can respect and trust, the dog will try to run things himself as a natural leader.

Visitors need to be introduced by someone they trust for additional safety. Even still, these dogs are ordinarily aloof around new humans. This temperament can change from dog to dog, as no two dogs are the same.

These dogs make incredible protectors for families. To those that they know and trust, they will guard them with their life. They are generally gentle and patient, which makes them excellent companions for children.

A full grown South African Boerboel has a large build and powerful jaw, very young children should not be left unsupervised with them. They should also be taught not to poke or torment the dog for safety purposes.

Socialization, especially earlier on, is essential for these dogs to accept other animals readily. Once they do, they protect them as if they were other members of the human household and are quite cuddly.

Things to Know When Owning a Boerboel:

Due to the massive musculature of this dog, the food requirements should be taken quite seriously. They need food that is easily digestible and full of the vitamins and nutrients they need. The protein content is especially important for the Boerboel, needing high protein rations to keep up its growth, muscle tone, and energy outputs.

The diet of the puppies is especially important since they grow fast and need food to support the growth. Be sure to find food, no matter the age, whose formula promotes the growth and maintenance of large dog breeds. For puppies, try to find a large breed puppy formula to ensure their growing needs are met.

Make sure you develop a budget based on the food required for this dog. The price and quantity of food they ingest can catch some people off guard and be hard-hitting if they are not ready for it.

The Boerboel does best if its energy output is directed towards specific working tasks. These can include pulling things, protection and guarding of an area, or training in competitive dog sports.

Boerboels should not be left alone in a yard for long periods, especially those that are not properly fenced in. The need to have directed exercise and thought-provoking tasks are better than simple walks. If you give them toys, they will enjoy them and play with them consistently. Due to the strength of their jaws, they will also destroy them quickly, and thus a toy budget may be appropriate.

If walking is the option that you have, be sure to take him on a couple of walks a day, with at least an hour of consistent activity. This way, he will be less aggressive or snappy in indoor situations.

The training of a Boerboel, as with any dog meant for aggression or protection, is of critical importance, especially in family situations. They need an assertive trainer that can quickly establish himself as the alpha male to earn the dog’s respect and move forward successfully.

To develop an obedient nature for the life of the dog, the puppies and young adults require daily training sessions and consistent commands. Everyone involved in the dog’s upbringing should be aware of the commands and precisely what they mean.

Be aware that an assertive trainer does not connotate an aggressive one. These dogs are intelligent and have high emotional capacities. Negative or harsh reinforcement with any manhandling will cause Boreboels to develop a resentful attitude that may result in aggression.

This breed has an easy grooming requirement due to the short hair all over its body. They generally enjoy the attention, so they are easy to brush and bathe when needed.

Their coat is short, dense, and sleek. With a maintained schedule of grooming, they shed an average amount for short-haired dogs.

Just as the build of the Boerboel is strong, so is the system of the dog. They have few reported cases of major hereditary health problems, living an average of ten to twelve years. Watch out for dysplasia in the hips and elbows of the dogs. Also, watch out for the health of their eyes as several of the other commonly associated health problems target the health of their eyes.

The main difference between male and female Boerboels is their size. The female Boerboel tends to be several inches shorter and can weigh substantially less than a full-grown male Boerboel.

Beyond size, their temperament and personality traits are not consistently different between the two genders of Boerboel.

The Boerboel is not usually the right dog for those in need of a companion but instead flourishes in situations where it can be put to use. As the name of the dog suggests, it does well living on farms or larger spaces to protect than in small apartments. This is also due to its size.

It is a fearless dog that can be highly affectionate to those that he knows. If there are many new visitors, take care to train him with a firm hand to make sure no one gets hurt, even accidentally. Don’t leave him alone for too long to avoid destructive behavior and negative emotional impact, and he will be your guardian for life.

Whippet vs Greyhound: What Are The Differences?