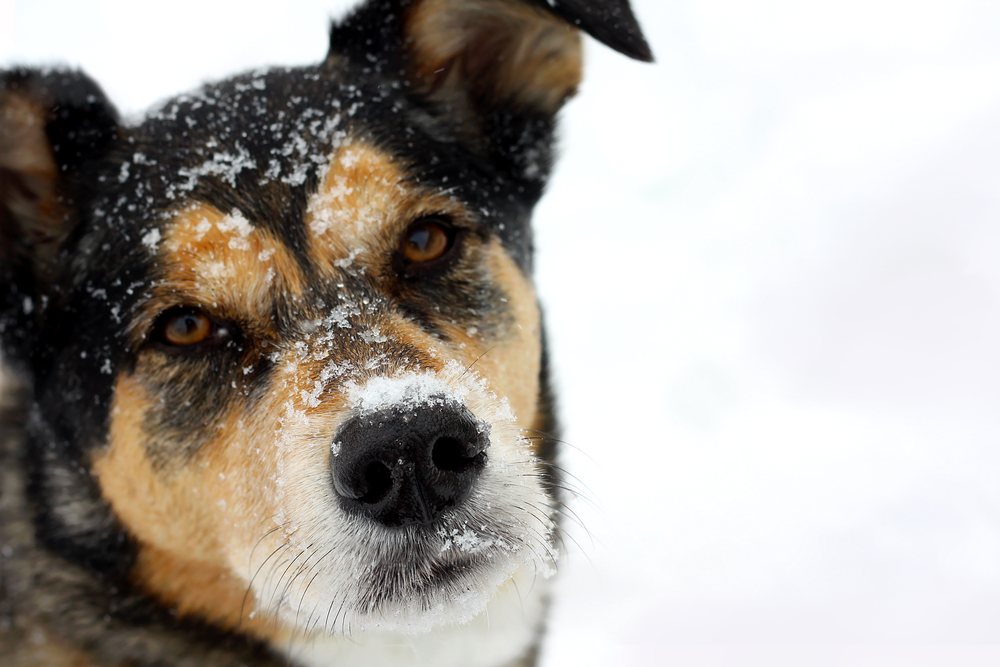 If you are looking for a versatile work dog that is both utterly fearless and incredibly gentle, look no further than the American Bulldog German Shepherd mix! Whether you need help on the farm, a good watchdog, or a steadfast companion — this dog can do it all.

Developed in England, the original Bulldog was a cattle driver and home guardian. Later, they were used in the blood sport of bull-baiting. After this cruel sport was made illegal in England, these dogs evolved into the significantly smaller companion Bulldog we see today.

But in the United States, the imported prototypes of the original Bulldog continued to be bred true and eventually became known as the American Bulldog. These dogs were used for a variety of work on ranches and farms, and today they continue to be used as working dogs as well as companions.

The German Shepherd Dog is the descendant of old farm and herding dogs. They were first developed in the early 20th century for herding as well as police and military use. They have been used as guide dogs, service animals, search and rescue dogs, and are a popular companion as well. The German Shepherd Dog ranks among one of the most popular breeds in the entire world.

With their keen intelligence and gentle nature, an American Bulldog German Shepherd Mix pup is often quiet but curious. If you’re willing to give them a moment to warm up to you, you’ll find yourself completely won over by those thoughtful eyes and adorably oversized paws.

And they grow into those paws! These big, smart dogs are highly trainable and need a lot of attention from their owners. Be sure you’re willing to put in the effort to teach, care for, and make decisions around a dog in your life.

If you decide to go to a breeder for your puppy, get to know the breeder too. Ask them questions about how they socialize and train their puppies, what they feed them, and what kind of health concerns they have encountered. The more you ask the more likely you are to get a well-adjusted, healthy puppy!

There is no standard price yet for the American Bulldog German Shepherd mix. Hybrids are often cheaper than purebred, but we can get a rough estimate looking at the prices of the two parent breeds.

Both German Shepherd Dogs and American Bulldogs can be very pricey due to their desirability as guard dogs and service animals. Also, Bulldogs of all breeds can be more expensive because often they must be delivered by cesarean section if their heads are too big to be delivered naturally.

So, depending on the birth method and the breeder, you will probably be looking at anywhere between $1,500-6,000 for an American Bulldog German Shepherd mix puppy.

By World War II, these dogs were nearly extinct. A returning veteran worked to revive the breed, which then became known as the American Bulldog.

2. The German Shepherd dog makes a better movie star than some humans.

Rin Tin Tin is perhaps the most famous dog in all of movie history. He was rescued from work on the World War I battlefields by the American soldier, Duncan Lee, and trained to work in silent films. Warner Bros. had such amazing success with his movies that they would make a new one whenever they were experiencing financial difficulties.

This famous German Shepherd Dog was so beloved, in fact, that he almost won the title of Best Actor at the 1929 Academy Awards. Many believe that he was passed over for Emil Jannings only because he was a dog — apparently Rin Tin Tin’s popularity and film earnings far exceeded that of the human winner!

3. The American Bull Dog German Shepherd mix will love having a job.

Coming from two breeds that are highly driven work dogs, the American Bull Dog German Shepherd mix will be happiest when they have a job to do. They are smart and love being allowed to assist their owners. Whether it’s facing down an irate bull, or just helping you cross the street, these dogs will rise to the challenge!

While their hardworking nature is important to take into account when considering lifestyle and necessary activity levels, we hope it won’t distract you from the American Bulldog German Shepherd mix’s many other winning personality traits.

They are surprisingly complex creatures, due in part to their high IQ. German Shepherd American Bully Mixes are also thoughtful, big-hearted, and protective. It isn’t every day that you meet a dog that can protect you from intruders and give you the best snuggles of your life!

For further ideas of what character traits you may encounter in an American Bulldog German Shepherd mix, you can take a closer look at the two parent breeds.

The American Bulldog is a confident dog that is gentle and affectionate with their family, but aggressive toward intruders and fearless with large animals (like bulls!). They are sensitive, intelligent, and usually quite calm.

The German Shepherd Dog is a self-assured, even-tempered canine. They are playful and loving with friends and family, and though initially cautious of strangers, they warm up quickly. They are incredibly smart and highly trainable and are commonly considered the second smartest dog breed in the world.

The American Bulldog German Shepherd mix will make a fantastic family dog, given some socialization and training. They are naturally gentle and playful with kids, but their large size means they could easily knock a small person down when excited. If both dogs and kids are socialized with one another from a young age, however, they can be a sweet and attentive family member.

In fact, they may be better suited to a family than an individual. These highly driven dogs love being included in activities with their owners. And combining that with their intelligence and energy means that they could be overwhelming for just one person.

Though often very friendly toward other dogs and pets, the American Bulldog parent sometimes imparts a personality that is less suited to a household with multiple other animals. Though generally mellow, there is a certain stubbornness that may cause friction.

Socializing these powerful dogs at an early age is especially important. When your dog can grow to be over 100 pounds of muscle, you want to make sure they have healthy mutual respect for everyone in the house. In the interest of harmony, we recommend this breed be kept with only one other in-home pet.

Welcoming a canine companion into your family is a huge life decision. Before you get pulled in by their big cuddly faces, here are some things you should know about the care and keeping of an American Bulldog German Shepherd mix.

A well-balanced diet is one of the best things you can do to make sure your German Shepherd American Bully Mix is healthy. And rather like humans, dogs are omnivores that need a wide range of animal and plant-based nutrients to meet all their nutritional requirements.

Start with a high-quality kibble — one without a bunch of byproduct ingredients and grain fillers — and supplemented occasionally with fruits and veggies, with the approval of your vet. Even dogs can get bored with eating the same thing every day; keeping them interested in their dinner will lessen the likelihood that they come begging for yours!

Be sure to talk to your vet about proper portion sizes, because any extra weight on a large dog can be detrimental to their health. Weight issues can exacerbate and accelerate joint issues that are common in bigger breeds.

The American Bulldog German Shepherd is an athletic and active canine. This, coupled with their immense size, means that we only recommend these dogs to those who can exercise them multiple times a day and have large fenced in yards or plenty of property to roam. A big, bored dog can cause a lot of mayhem inside the house with a minimum of effort!

If your dog starts displaying behaviors related to boredom, like chewing shoes and furniture or unnecessary barking, try giving them some toys that make them think. There are many types of puzzle toys available. For a dog as bright as this, mental exercise can be just as important as physical.

Being not only smart but also very solidly built, the American Bulldog German Shepherd mix is a dog that needs to be trained from a young age by an experienced dog owner. If you are new to dogs, consider contacting a professional trainer so that you can start off on the right foot.

The good thing about training a bright dog like this is that they will probably enjoy it! They crave intellectual enrichment as well as physical, and they love being able to do activities with their owners. Given their natural drive to do a job and do it well, training should be fun for both of you.

The grooming requirements of the American Bulldog German Shepherd mix are dependent on which parent your dog’s coat most resembles.

German Shepherd Dogs are double-coated and have a thick, dense undercoat and a straight outer coat. They need to be brushed multiple times a week, or even daily when shedding more in spring.

On the other hand, the American Bulldog has a single coat that’s short, smooth, and requires little attention.

Invariably, you will need to clean their ears regularly to prevent infections. Check their nails too, as they will need clipping if not worn down naturally. Also, consider brushing their teeth occasionally as well, as this will promote good gum health and fresh breath.

Hybrid breeds are generally healthier when compared to their purebred counterparts, and the same goes for the American Bulldog German Shepherd mix. There are, however, some health concerns to keep an eye out for.

So, is the American Bulldog German Shepherd Mix right for you? If you are an inexperienced dog owner who is not attracted to the idea of training with your canine or live in an apartment, maybe not.

But, if you have the space and attention to lavish on this big-hearted — and just plain big — dog, you will find the American Bulldog & German Shepherd Mix is an exceptionally bright and devoted companion.