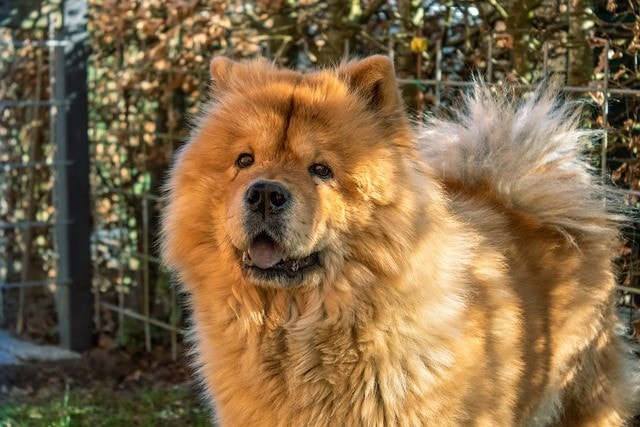 The Chow Chow is a medium-sized dog that is often described as being aloof or cat-like. With a long fluffy coat, lion-like mane and bushy curled tail, the Chow is a regal and confident looking dog.  They’re neither aggressive or shy but are fiercely protective of their families, and their alarm barking can become a nuisance if not controlled early.

Well trained and socialized, a Chow can be a fantastic family pet. They require a moderate amount of daily exercise as well as regular grooming and bathing. Despite their size, given their calm, stately demeanor, they are good dogs for apartment living.

The Chow is one of the oldest of the Chinese dog breeds, and their history can be traced back thousands of years. Originally breed as guard dogs employed to watch over both homes and livestock, most Chows these days are family pets or competitive show dogs.

Chow Chow Puppies – Before You Buy…

To many people, the Chow Chow has the appearance of a big cuddly teddy. Fluffy, puffed up and just ready to hug. While in fact, the opposite is true. Chows are not at all fond of being hugged and fussed over, and you are much more likely to find them to be quiet, independent, and almost standoffish dogs.

This popular misconception will likely be one of the first things that a good breeder will discuss with a potential new owner. Over the years, it has led to more than a few unwanted Chows finding their way into animal shelters across the country.

As with all dogs, it is essential to do your research before purchasing a Chow. They can be great dogs, but this is one breed that really won’t be for everyone.

Chows are expensive dogs, and depending upon the pedigree of your puppy’s parents, and the individual breeder, you can expect to pay $3000 – $8000 for a purebred puppy.

As with all dogs, the cost of owning a Chow does not stop at initial purchase price, and you can expect to speed a considerable amount throughout your dog’s lifetime. Chow Chows require a substantial amount of grooming, and together with their healthcare costs, you could expect to spend a further $10,000 over the life of your pet.

1. The Chow Chow has a blueish black tongue

One of the unique features of the Chow is that it has a blueish black colored tongue. Tongue color is an import part of their breed standard, and any other tongue color is considered a disqualifying feature.

Having a blue tongue is almost unheard of in mammals, and over the centuries the color of the Chow Chow’s tongue is the subject of several Chinese legends.

According to one Chinese legend, at the beginning of times, the Chow was a special dragon-dog that hated the nights. The dragon-dog hated them so much one night it licked the night sky to try and make the daytime show up underneath. While yet another Chinese ledged says that one day when a monk fell ill, he was replaced in his daily chores by a dog. The dog went to fetch the firewood instead of the monk and as it found and carried back charred logs its tongue color was forever changed.

Chow Chows have extraordinarily little odor and are meticulous about their personal hygiene. A feature that may be attractive if you live in an apartment, or a house where your dog will be inside all day.

They are also quite easy to housetrain and will rarely have an accident anywhere inside the house. They do, however, have a double coat that sheds seasonally. So, despite them being exceptionally clean, you will at times you will find yourself needing to vacuum or sweep up a lot of doghair.

Sigmund Freud, the founding father of psychoanalysis, was a fan of the breed and he owned several Chows throughout his life.

Freud’s most notable dog, Jofi, often accompanied his master during his patient sessions and was of great help in making children feel relaxed. Jofi is also credited with assisting in analyzing patients. Freud recorded in his notes that his pet was particularly good at identifying nervous patients and only approached those that were calm, avoiding anyone in an agitated state.

Temperament & Intelligence of the Chow Chow

Yes. Provided that they are socialized while young, a Chow Chow can be a good family dog.

Chows usually bond very closely with their families. Although they are not social or outgoing dogs, they will be devoted and protective pets. It is essential, though, that a Chow learns its place in the family from a young age, as they can become quite domineering.

A Chow will not take kindly to tormenting behavior or abuse. For this reason, they are better suited to a family that has older children.

If well socialized and trained when they are young, Chows will generally get on with other pets in your household. However, their domineering personalities can sometimes cause problems when new pets are introduced into the house. For this reason, you may need to keep an eye on the way they interact with your new pet for a few days. Chows raised with, and used to being around other animals, will be are far less likely to have an issue with a new pet joining the family.

When introducing another Chow Chow into your family, you should consider buying one that is of the opposite sex to your current dog. Chows are much more likely to fight with dogs of the same sex as themselves.

Things to Know When Owning a Chow Chow:

While most Chinese farmers traditionally feed their Chow Chows a grain-based diet, your modern-day Chow will be much better off with a well-balanced diet of commercial dog food.

We recommend that the best way to feed your dog is with a premium brand of dry dog food. Ideally, you should find a formula that contains a healthy mix of meat, grains, and fruits/vegetables. It may also be a good idea to consider an age-specific product for a medium-sized dog.

Of course, if you have any concerns or questions about your Chow’s diet or dog nutrition in general, you should speak with your vet.

Despite their size, Chow Chows only require a moderate amount of exercise. They typically get away with one 30-45 minute walk each day, but they will also enjoy a bit of casual outdoor play. The Chow is not, however, the sort of dog that will have an appetite for long active games of fetch. In fact, if you can get your Chow to play along at all, likely, it won’t be for more than a few minutes at a time.

Given their moderate exercise requirements, despite being a medium-sized dog, the Chow Chow can quite happily live in an apartment.

Early socialization is the key to raising a well-adjusted Chow Chow. They need to become familiar with being around strangers and other animals while they are young if they are to become well-mannered and social adult dogs. As unsocialized, a chow can become aggressive towards strangers and other dogs, and this can easily cause problems.

From an obedience point of view, it is also essential that your Chow learns early in life that your commands are must be followed. They can have quite a stubborn streak and left unchecked, this will result in a disobedient dog that will only listen when it suits them.

However, Chows are quite intelligent dogs, and with the right training and socialization, they can be very well-behaved and well-balanced pets.

Chows have a thick fluffy double coat that traditionally allowed them to survive in the harshest of weather conditions. As such, they will require a lot of grooming. You should expect that your Chow will require to be brushed at least twice a week, and to keep your pet’s coat looking it best, he will need a monthly bath with dog shampoo and conditioner.

Chows also need their teeth brushed regularly, nails clipped every few weeks, and it may be necessary to clip the hair around their eyes to ensure it doesn’t become a problem.

Of course, you may just want to make a regular standing appointment with your local professional dog groomer. It will likely add significantly to the cost of keeping your Chow, but it is the easiest way to keep your dog’s Grooming needs all under control.

Many of the primary health conditions that Chows are prone to are hereditary. As such, you must ask your breeder for the health reports for your pet’s parents before you decide to purchase.

As with many dog breeds, the male Chow Chow is typically a larger and more robust dog that a female.

From a personality and temperament perspective, the difference between the sexes is most noticeable between females and whole (non-neutered) males. Male Chows can be more dominant, stubborn, and independent than females. However, dominance and territorial behavior can be displayed by unspayed females while they are in heat. With a Chow, you may also find that aggression is more of a problem in whole males.

Many of these behaviors can be limited or removed entirely by neutering or spaying your dog. In fact, unless you are planning to breed from your Chow, we highly recommend that this is something you should strongly consider doing.

The Chow Chow is a fantastic dog breed, with a long and well-documented history. If trained, socialized, and looked after appropriately, they make great family pets or show dogs. Still, they’re not a dog that is for everybody.

A Chow Chow is not generally a good dog for any novice dog owner unless they have the time to invest in learning to train, socialize, and care for their pet. All dogs need training and socializing, but if raised inappropriately, Chows can develop some anti-social behaviors that can cause no end of problems. Problems that could be difficult for even an experienced dog owner to manage, let alone a novice.

Yorkie vs. Shih Tzu: Which Dog is Right for You? (with Pictures)