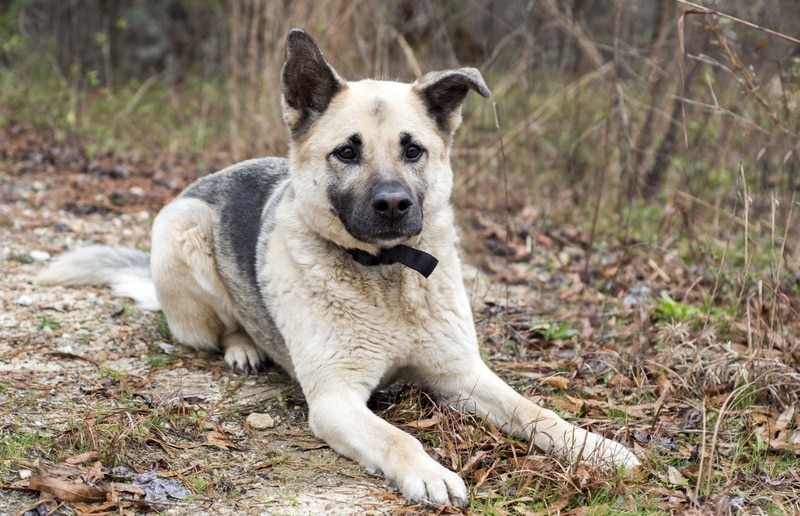 If you were hoping to create the perfect guard dog from scratch, you’d definitely want to add Chow Chow and German Shepherd DNA into the mix. Both breeds are extremely alert and protective, and both are big enough to make any bad guy think twice.

It should come as no surprise, then, that crossbreeding the two dogs creates a canine supercop: the Chow Shepherd. These dogs are fiercely intelligent and loyal to their owners, but they tend to be suspicious around newcomers.

While both Chows and German Shepherds are well-known breeds, the Chow Shepherd is much less common. If you’d like to learn more about these wonderful dogs, the guide below will fill you in on all the pertinent details.

Chow Shepherd Puppies — Before You Welcome One Into Your Family..

While the idea of having an incredible guard dog in your backyard may be appealing, that doesn’t mean you should rush out and buy the first Chow Shepherd puppy you come across. These dogs can be challenging for novice owners, and ownership may be best-suited for those with more experience.

That’s not to say that these dogs aren’t loving, affectionate, and loyal, because they most certainly are. However, they’re also incredibly intelligent and equally stubborn, and they can be a handful during training.

If you do decide to bring one of these dogs home, be sure that you have the time necessary to devote to their training. You may also want to budget funds for a professional trainer, just in case you have trouble achieving the desired results on your own.

1. These Dogs Are Prone to Flea Allergies

It’s extremely important to stay up to date on the dog’s flea medication. If you own one of these dogs, as they often suffer allergic reactions to flea bites.

The symptoms of such a reaction include a rash, excessive scratching, blisters, bleeding sores, and pus discharge.

The breed’s coat can exacerbate the issue, as their thick fur offers plenty of space for insects to hide. You should brush them with a flea brush regularly, as well as use a medication that kills fleas in every stage of their life cycle.

If you can’t stand a clingy dog, then you should get along with a Chow Shepherd just fine. However, if you need a dog who’s permanently attached to your hip, these pups may prove to be a disappointment.

They have strong independent streaks and often come to you for affection on their terms. This is great if you enjoy your space, but it provides something other than the traditional dog ownership experience.

The Chow Chow and German Shepherd mix do best in homes with big backyards — but only if they’re securely enclosed.

If you leave these dogs to their own devices for too long, they’ll put their big brains to work trying to find a way out of the yard. This can include digging their way out, wriggling through loose boards, or even jumping the fence entirely.

If you can’t secure your fence, you’re better off not leaving the dog in the backyard unattended.

Temperament & Intelligence of the Chow Shepherd 🧠

Chow Shepherds are extremely intelligent dogs, as both parent breeds are among the smartest in the canine world. They can quickly figure out what you want them to do, as well as how to get you to do what they want you to do.

This means they take to training well and require as much mental stimulation as physical. If you don’t give these dogs enough to do to occupy them, they’ll find ways to occupy themselves, and that can mean digging up your garden or destroying your furniture.

Chow Shepherds are loyal and loving toward their families and would do anything to protect them. However, that instinct can sometimes cause them to be standoffish (or worse) toward strangers. While this makes them excellent guard dogs, it can make having visitors over a dicey proposition.

Just because they love their families doesn’t mean they love them all the time. These mutts will often entertain themselves rather than hang out with you, and they won’t always play games just because you’re in the mood.

Chow Shepherds can make great family dogs, but only if they’re properly trained and socialized.

If left to their own devices, they may not have much patience for small children; however, they’re equally likely to protect little kids with their lives. Unfortunately, they don’t always show the best judgment in determining threats, so your kid having friends over to play might be a bad idea.

They can get rambunctious while playing as well, which may make them dangerous around elderly family members. This can make them quite popular with older kids, though.

If you want to bring a Chow Shepherd around your family, it’s imperative that you first teach them how to behave politely, and it’s a good idea to never leave little ones around them unattended.

Chow Shepherds aren’t typically prone to aggression around other dogs, but that doesn’t mean that they’ll take a shine to them either. They’re often aloof around other animals, but they sometimes tend to be domineering as well.

The Chow Chow and German Shepherd mix tolerate cats and other pets fairly well, although you should socialize them from a young age to ensure that there aren’t any issues. They generally tend to ignore them.

Things to Know When Owning a Chow Shepherd

Chow Shepherds can make fantastic pets but owning one isn’t for everyone. Before you take the plunge, there are a few important things you should consider.

These are big dogs, and they can pack away quite a bit of kibble. They’re active for their size and as a result, may eat more than similar breeds.

We recommend feeding them a high-protein diet to ensure they have all the energy they need. This should also help to stave off obesity (although portion control is your best bet there). Keeping their weight at manageable levels is important, as the breed tends to suffer from joint issues later in life.

Chow Shepherds are often food motivated, so it’s a good idea to incorporate treats into your training regimen. Just don’t take it too far.

Owning a Chow Shepherd isn’t a good idea if you’re a couch potato. These dogs need quite a bit of strenuous activity, or else they’re liable to turn destructive.

At the bare minimum, you should offer them an hour’s worth of physical and/or mental stimulation per day. Don’t neglect challenging their minds either, as these dogs are extremely intelligent and like to be challenged.

Walks are necessary but not sufficient, and you should work in other training as well. Obedience work is a good idea, as is agility training.

Training these dogs is an absolute necessity, but they probably won’t make it easy.

They are both intelligent and stubborn, which means they’ll quickly learn any commands you try to teach them. Unfortunately, they’ll quickly get bored with them too, so there’s a need to make it continually challenging and engaging.

Chows can be standoffish and even aggressive toward strangers, so you must socialize your Chow Shepherd puppy as early and often as possible. If you introduce them to a wide variety of people and situations, there’s a good chance that you can teach them to be accepting of strangers (of both the human and canine varieties).

If you feel overmatched while training your Chow Shepherd, don’t hesitate to consult a professional. It’s much better to seek outside help early on than it is to let bad behaviors harden and fester.

Breeding a Chow Chow with a German Shepherd is like crossing a ball of fluff with an even bigger ball of fluff, so we hope that you have a reliable brush on hand. In fact, you’ll likely need more than just a brush, so invest in a de-shedding tool as well.

These dogs shed constantly. They have thick, dense coats with heavy undercoats, so while their shedding is bad during the winter, it becomes nearly unbearable in the summer. As a result, it’s generally advised that you don’t own one of these dogs if you live in a hot, arid climate.

You should brush their teeth several times a week and trim their nails as needed. Be sure to clean out their ears regularly as well, as they can be prone to ear infections.

Chow Shepherds are generally healthy dogs, with one big exception. They often inherit the swayed back that German Shepherds are known for, and this can lead to joint and spine problems down the line.

Beyond that, here are a few other things to watch out for:

Both genders are fairly similar in size, although the males can be a bit bigger.

Temperamentally, females are usually more loving and affectionate, whereas the males spend most of their time patrolling the perimeter and marking their territory. Thus, males often make better guard dogs, whereas females may be a better choice for families.

The Chow Shepherd is an intelligent and athletic animal who makes a great guard dog while also being suitable for families. However, you will need to commit to extensive training and socialization.

As a result, Chow Shepherds probably aren’t ideal for first-time owners. You need to understand the proper way to train a dog — not to mention how to overcome stubbornness — to get the most out of these creatures.

If you have the time and experience, though, bringing home a Chow Shepherd puppy could be one of the best decisions you’ve ever made.