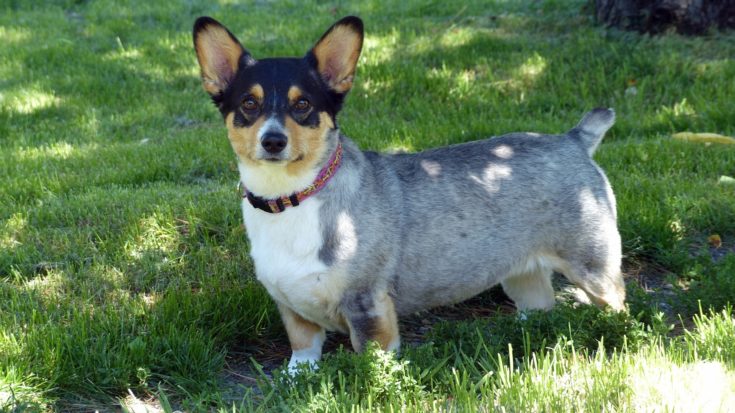 The short silent type, Corgi Cattle Dogs, also known as Cowboy Corgis, are an interesting mix between the Australian Cattle Dog and the Pembroke Welsh Corgi. This designer dog often takes cues from both sets of genes, commonly displaying the colors and patterning of a Cattle Dog with the short legs and round body of a Corgi.

These are highly intelligent dogs with a natural penchant for working. Often, they still have the energy and gumption present in a Cattle Dog, causing them to physically outwork their stumpy little legs. Still, they’re an excellent choice for working dogs because of their intelligence and independence that make them great at working alone.

To keep a Corgi Cattle Dog engaged will require a lot of intense activity. Mental challenges, physical challenges, and intense play are all necessary for this on-the-move breed. They need a lot of exercise, so if they’re not being used as working dogs, extra care will have to be taken to give them purpose and keep them stimulated.

Corgi Cattle Dog Puppies – Before You Welcome One Into Your Family..

One annoying trait that turns off potential pet owners is a dog’s proclivity for loud barking at the slightest intrusion or noise. Granted, some people prefer a dog that doubles as a built-in alarm. But if you want a dog that’s more of a silent companion, then the Cowboy Corgi is a great choice for you.

These are nearly silent dogs. It’s pretty rare that your Corgi Cattle Dog will bark. But that doesn’t mean they’re good for apartment living! They have far too much energy and need more space than an apartment could possibly provide.

2. They Inherit the Herding Instinct

Most people are aware that Australian Cattle Dogs were bred for herding cattle. After all, it’s right in the name. But fewer people know that Corgis were also used for herding. Because the Pembroke Corgi is so low to the ground, they could easily bite the ankles of cattle without getting kicked or trampled, making them the perfect herding dogs in Wales.

The Corgi Cattle Dog hasn’t strayed too far from its roots either. Inheriting the herding instinct from both sets of parents, these dogs are naturally great at rounding up animals and make excellent farm dogs. They also tend to herd in the other pets or children in the family, subconsciously fulfilling their natural herding role.

3. This Working Dog Needs A Job

As we just mentioned, the Cowboy Corgi is descended from two breeds of hard-working herding dogs. These are dogs that not only love to work — they were actually bred to work. It’s in their blood. If you don’t give this dog a job they will be unfulfilled, unengaged, and have too much excess energy to make a good house dog.

Highly intelligent and very loyal, these are trainable dogs that can learn to complete tasks. They’re very loyal to their person, but they are also very independent dogs. They can work well alone, which is part of why they’re prized as great working dogs.

Cowboy Corgis won’t do well with strangers unless socialized from an early age. They’re very protective of their family and their home, so they’ll see unknown intruders as a threat.

With such a highly protective instinct, Corgi Cattle Dogs make great family pets. They’re great with kids and will always keep an eye out to protect them as they seem to view children of their family almost as animals they’re supposed to herd.

Cowboy Corgis also have a ton of energy that needs an outlet, so families might have an easier time providing an ample amount of exercise, engagement, and playtime that the Corgi Cattle Dog needs.

The Corgi Cattle Dog can get along well with other pets if they’re socialized early on. However, they have a naturally very strong prey drive, so if you don’t start bringing them around other pets early, they may see small animals as food and give chase.

If socialized properly, Corgi Cattle Dogs can do well with other dogs and other pets of a similar size. They generally revert back to instinctual behavior, tending to herd the rest of the animals and taking on a role as leader and protector.

Things to Know When Owning a Corgi Cattle Dog:

Though the Corgi Cattle Dog is a medium-sized dog at largest, they have the dietary needs of a larger dog. These dogs have high metabolisms and tons of energy that they’re expending all day. Despite their smaller size, they’ll intake three cups of dry food each day with ease.

Cowboy Corgis don’t have special considerations regarding what types of food to feed them, so a high-quality dry kibble that’s high in protein is a great place to start.

Don’t let the short, stubby legs fool you — Corgi Cattle Dogs need a lot of exercise. These are highly active dogs that need to release all their energy or it will build up and you could see some destructive behaviors starting to show.

If you can give your Cowboy Corgi a job, it will help them to release that energy, get the exercise they need, and also get the much needed mental stimulation. Other than that, you will need to provide them with tons of space to run around. These dogs need a large yard; apartment living will be terribly unhealthy for such an active dog.

Even living with a large yard, these dogs need structured exercise. At the least, you’ll need to take your Corgi Cowboy on several walks each day to keep those legs moving and release that pent-up energy.

Corgi Cowboys are incredibly intelligent, so they can be great candidates for training. They’ll even do well with advanced training. It provides the perfect mental stimulation and engagement that Corgi Cattle Dogs need to be healthy. It’s also a great way to bond with your Cowboy Corgi, and they respond well, learning commands very quickly.

Remember, both parent breeds were bred as working dogs, so the Corgi Cowboy has inherited a lot of that intelligence and the desire to please.

Corgis and Cattle Dogs are known to drop their coats, so you can expect the shedding to be noticeable with a Corgi Cattle Dog. You’ll want to brush daily for at least 10 minutes to remove all the dead hair and whatever they pick up from the field. A slicker brush is a good choice to help get rid of the loose hair.

Though the Corgi Cattle Dog doesn’t suffer from a slew of health issues, there are a few to look out for.

Hip dysplasia is a common ailment that affects many older dogs. Generally, it tends to appear in larger dogs, but the Corgi Cowboy gets this handed down genetically from the Corgi, which is very susceptible to this disease.

Dogs with this condition have decreased use of their bodies and can be in considerable pain. The ball and socket of the hip do not fit properly, grinding against each other instead of smoothly sliding in place.

Corgi Cattle Dogs can also suffer from genetic deafness.  Australian Cattle Dogs are known to have a susceptibility for deafness, which they’ve unfortunately passed down the hereditary ladder to the Corgi Cattle Dog. Luckily, this problem isn’t likely to affect your dog until later in life, and it’s not a painful or debilitating issue.

Physically, male and female Corgi Cattle Dogs are very similar, with males tending to weigh just a few pounds more. Temperamentally, however, they do have some noted differences.

Males tend to be a bit more easy-going and laid-back. They’re happy doing pretty much anything with you, not generally exhibiting much extreme behavior. They may be affectionate, though not overly so, and they won’t often be aggressive either.

Females tend to display more alpha characteristics, being more aggressive and stubborn. The females will also generally be more affectionate, displaying the more extreme ends of their temperament.

Loyal, hard-working, and full of energy, the Cowboy Corgi is a unique dog that’s perfect for farm life or families. You’ll need to provide this dog with a lot of space so it can burn off all its energy. Preferably, you’ll have a job that you can give them so they can feel fulfilled in their duties. The offspring of two herding breeds, the Corgi Cattle Dog is a worker at heart.

Great with kids but very defensive against strangers, these dogs naturally take on the role of protector. But you’ll need to socialize them early on if you want them to be safe around strangers in your house.

Overall, these dogs are a lot of fun and make excellent companions. Just make sure you can give them the space and stimulation necessary for a happy and fulfilled life.