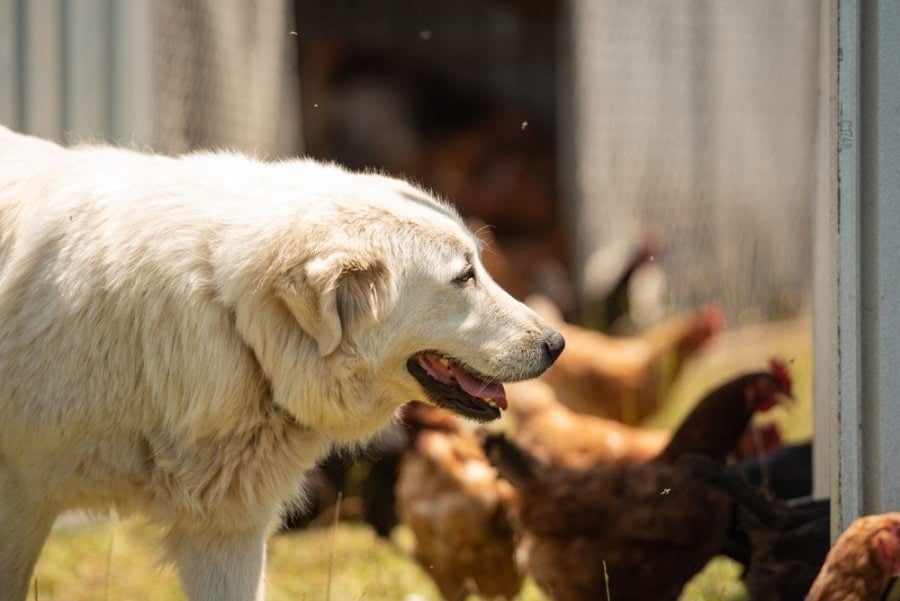 If you live out on a farm, you may want to consider getting a dog to help you guard your land and protect your stock. But not all dogs are cut out to be guardians.

Some breeds will make dinner out of your chickens if given the chance. So, what are the best dog breeds to raise around them?

The ideal dog has natural guardian instincts but with a low prey drive. And while this sounds crazy, the dog breeds that most fit these traits are often very large breeds. But if you’ve got chickens and are looking for a livestock guardian, check out any one of these 10 dog breeds.

The 10 Dog Breeds That Get Along With Chickens:

This gentle giant is one of the most loving dogs on the planet. And beyond being the world’s biggest lapdog, their primary goal in life is to protect anything and everything. That includes you, your family, your chickens and other animals, your patio furniture, that old Bowflex you keep in the garage, and so forth.

However, they’re not particularly aggressive — especially if raised properly. Generally, the Great Pyrenees’ bark is much worse than their bite. In fact, they’re one of the most vocal breeds around.

Not to be confused with the Great Pyrenees above, these giants are known for their deep loyalty to their owners and undying dedication to protecting those in their pack. There have been many reports of these dogs making the ultimate sacrifice to protect both their owners and chickens.

However, they aren’t quite as friendly as the Great Pyrenees and require tons of early socialization to raise them to be the protectors that they’re known to be.

Depending on where you live, you might want to consider a Tibetan Mastiff. These dogs are enormous, weighing up to 200 pounds! However, despite their large size, they’re excellent guardians for your chickens. And if their size doesn’t scare away any would-be predators, their ferocity will.

And the Tibetan Mastiff is a distinctly nocturnal dog breed, meaning that they’ll be just as effective at keeping chickens during the nighttime as well as the day. But keep in mind that Tibetan Mastiff can be a stubborn breed. This means they’ll need early, rigorous training to maximize their potential.

The Maremma Sheepdog is like a watchful nanny for both your family and your poultry. They’re big, lovable giants that hail from central Italy with the reputation for being gentle and friendly. But they are herding dogs and don’t have any problem gently nudging everyone into line as they need to.

These dogs not only are great with protecting your chickens, but also with looking after children as well. If you’re searching for a perfect family dog/chicken guardian, the Maremma Sheepdog may be just the answer you’re looking for.

This herding dog is exceptionally smart with the instincts to herd and protect chickens. They may just be one of the ultimate dogs to have alongside your birds. However, they also have the reputation of being extremely independent and downright stubborn.

They must be trained very early on to follow commands when called the first time.

The Akbash has a sixth sense that any psychic would be jealous of. They have the uncanny ability to detect who is and isn’t a threat. As long as you have no intention of doing any harm to their families or livestock, the Akbash will generally take kindly to you and become as close as a dear friend.

However, if they feel that you’re a threat, the Akbash will not hesitate to take defensive action to protect their loved ones. Thankfully, their ability to defend isn’t tested often. The large size of the Akbash normally has predators thinking twice before attacking or invading.

If you’re going to protect your chickens, why not do so with a sheep? Or a dog that looks like a sheep anyway. The Komondor, or Hungarian Sheepdog, is one of the largest dog breeds in the world and covered in long, thick corded coats that make them look like a hybrid between a sheep and a mop.

But don’t let their goofy appearance deceive you. They are fiercely loyal and protective of their families and livestock including chickens. However, this breed does have a tendency to become overprotective, which can lead them to be a threat to strange individuals for no reason. You’ll need to train this out of them at an early age.

These dogs are trending up in the pet world thanks to their strong obedience and total loyalty to their owners. But how are they with chickens? Quite good, in fact. These big pups are known for guarding livestock and have low prey drives, making them ideal watchdogs for your farm.

The only hang-up? They shed a lot. So, as long as dog hair doesn’t bother you, you’ve met your perfect guardian match.

The Kangal is another excellent guard and family dog. They’re very friendly and loving to their families — especially children and other pets. However, that doesn’t keep them from shying away from their main job of protecting their flocks.

Although they are considered a large breed, the Kangal is one of the smaller pups on our list.

Though uncommonly found outside of their native Hungary, this goofy pup is one cool customer. They’re happy, jovial, and friendly to just about everyone they meet including the chickens they’re often assigned to protect. And while they are loving pups, they take their role as guardians extremely close to heart.

The Kuvasz is a very proactive breed when it comes to watching their flock. Once they’ve detected a threat, they tend to go on the offense, preferring to act upon the threat instead of waiting in a defensive posture. Fortunately, they have a natural sense of threat detection and don’t commonly turn on people — unless one of them is trying to steal your chickens.

Dogs That Are Good With Chickens: Conclusion

If you’ve got chickens, you may want to consider one of these breeds. They’re each great guardians of livestock — poultry, in particular — and will provide you with some sense of relief when left alone with your chickens.

How to Stop a German Shepherd Puppy From Biting (7 Steps)