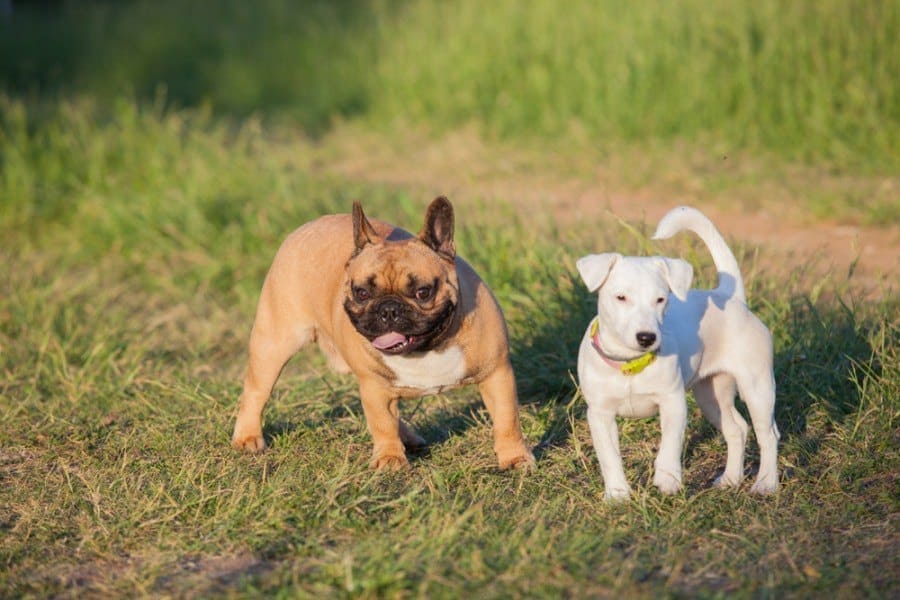 Both the French Bull Dog and Jack Russell are small dogs; however, they have significantly different looks, personalities, and energy levels. Thus, there is a considerable variation in the possible characteristics of a French Bull Jack.

The breed is small in stature and typically has a short snout and big ears, but other than that they get their looks from either parent. When it comes to energy levels, the French Bull Jack is also a mixed bag, as some will have the boundless energy of a Jack Russell. In contrast, others will favor the more laid-back lifestyle of the Frenchie.

Generally, the French Bull Jack is a well-adjusted dog that has a bright, outgoing personality. They tend to make friends easily and love to snuggle up with their owners. However, if they don’t get the attention or exercise that they need, they can have a naughty side and may become a little destructive.

French Bull Jack Puppies – Before You Get One

As the French Bull Jack can take after either parent, it can be a little difficult to determine the exact temperament of your new puppy. The best predictor may be to spend some time with some of your new puppy’s older siblings (if there has been a previous litter from these parents), or to look at the temperament of the parent dogs themselves.

You should look to see how both the parent dogs interact with strangers (i.e. you) and with other dogs.  Their activity levels are also useful to consider. As if both parents are active and energetic, it is far more likely that your new puppy will be too.

1. The French Bull Jack has a famous ancestor with the name of a US President

In 1819, a student at Oxford University in the UK by the name of John Jack Russell found a stray mixed breed, black and tan colored terrier wandering the university campus. Mr. Russell adopted the dog and named her Trump.

After graduating, Mr. Russell decided to breed Trump with his foxhounds. He aimed to create a dog that was big enough to hunt with his foxhounds, but small enough to get into the foxholes and rout of the foxes. The resulting breed became the modern-day Jack Russell Terrier.

2. It is quite surprising that the French Bull Jack exists at all

The French Bulldog, the other ancestor of the French Bull Jack, is incapable of breeding naturally and require both artificial insemination and delivery by caesarean section. This is because French Bulldogs have very slim hips, making it impossible for a male Frenchie to mount and mate a female. And also exceedingly difficult for the female to give birth naturally.

Consequently, the chances of a Frenchie mating with a Jack Russell (or any dog for that matter) are quite low, which means that breeding first-generation French Bull Jacks is quite a deliberate and challenging task.

Known to be a bit of a playful clown, the French Bull Jack is a great family dog when raised with children. They make loving companions and are affectionate towards and adore being with their family.

Of course, as you can get French Bull Jacks at either end of the activity scale, you need to keep in mind that you may end up with one that loves nothing more than curling up on the couch all day. But, equally, you may also have a pocket dynamo on your hands that needs to run about and play all day.

Regardless of which parent your French Bull Jack takes after, their temperament will be such that they will not only tolerate, but likely adore children. So, as far as being a family dog, you really can’t go wrong.

Provided they have been adequately socialized from a young age, French Bull Jacks will generally get on with all the other pets in your family. They can, however, be a little mischievous. A trait that when coupled with boundless energy and a need for constant play, can become a bit of an issue with older, grumpy dogs or cats.

Things to Know When Owning a French Bull Jack:

When it comes to feeding your French Bull Jack, you should be guided by their level of energy.  If you have an extremely energetic dog that is always on the go, you will need a commercial food formulated for small active dogs. On the other hand, a more general small-dog formula will be best for a more docile dog.

Either way, we recommend a premium-brand, high-quality dry dog food that will provide your Jack Russell French Bulldog Mix with a nutritious and well-balanced meal—ideally containing a mix of meat, grains, and vegetables/fruits.

The amount of food they require will vary both according to the type/brand of food and the energy of your dog, and you should be guided by the packaging. Of course, if you have any concerns or questions about your French Bull Jack’s diet or dog nutrition, you should speak with your vet.

As with many aspects of owning a French Bull Jack, the amount of exercise that your pet will require will vary greatly, depending upon your dog’s energy levels.

A highly active dog that takes after its Jack Russell lineage will require considerably more daily exercise than one who favors the French Bulldog. Frenchies only require a couple of short walks and perhaps a play in the yard every day. In contrast, those aligned more with the Jack Russell will need a long walk every day and a yard that they can bound around in as often as they like.

Because of this considerable difference in exercise requirements, it is not a good idea to get a French Bull Jack puppy if you live in an apartment. It may be okay to adopt a slightly older dog, provided you know that they are not one of those active dogs that need lots of space.

French Bull Jacks are highly intelligent dogs and will quickly learn new tricks. While typically easy to train, their mischievous side can come out if they are not mentally stimulated. Making training an excellent activity for keeping their brains active.

Occasionally, they can be a bit stubborn, and you may need to be a little firm with them decide they don’t want to listen. However, the best way to train a French Bull Jack is by rewarding good behavior, either with a food treat or play (depending upon which they respond best).

Socialization is also an essential part of your French Bull Jack’s early training as if they don’t become accustomed to other animals and people early in life, they can be a little snappy towards strangers. Incessant barking can also be an issue with this breed, and the problem should be dealt with early before it becomes a habit.

French Bull Jack’s are quite low maintenance dogs when it comes to grooming. They typically have straight, medium-length coats that will need brushing every 7-10 days. They don’t require clipping or scheduled bathing, which helps keep the cost of grooming to a minimum. They will, however, shed seasonally, and during these times will benefit from more regular brushing or a visit to a commercial dog groomer.

As with all dogs, you should check your Jack Russell French Bulldog Mix over frequently for ticks and other parasites and brush their teeth about once a week.

French Bull Jacks are generally sturdy and healthy dogs and provided they are well cared for, they’ll likely live a happy and healthy life well into old age.  There are a few conditions that they are prone to, and we have listed these below. If you have any concerns about any of these conditions, or in fact about any health issues with your pet, you should seek the advice of your veterinarian.

Being quite a small breed there is little noticeable physical difference between male and female French Bull Jacks. Sure, the male will likely be a little bigger, but not enough to make much of a difference.

It is in temperament that you will notice the digest differences, and only when you have a whole (non-neutered or unspayed) dog. An unspayed female Jack Russell French Bulldog Mix can become quite territorial when on heat. At the same time, whole male dogs can be more inclined to roam and will typically be more dominant and independent than females.

These behaviors can be reduced or even entirely removed by neutering or spaying your dog. Which is one of the main reasons we recommend that unless you are planning to breed from your French Bull Jack, you should consider spaying or neutering your dog.

Of course, the other reason for spaying and neutering is that it is a great way to help reduce the incidence of unwanted dogs ending up in shelters.

The French Bull Jack is an exciting and diverse breed. In some ways buy one can be a bit of a gamble as you never know whether your puppy will take after the super active Jack Russell or the more sedate and content French Bulldog.

Either way, though, they are fantastic little dogs, that while still quite rare are starting to grow in popularity.

If appropriately trained and socialized, they make great family or companion dogs, and if a that is what you are looking for the French Bull Jack is undoubtedly a designer dog breed that is worth checking out.