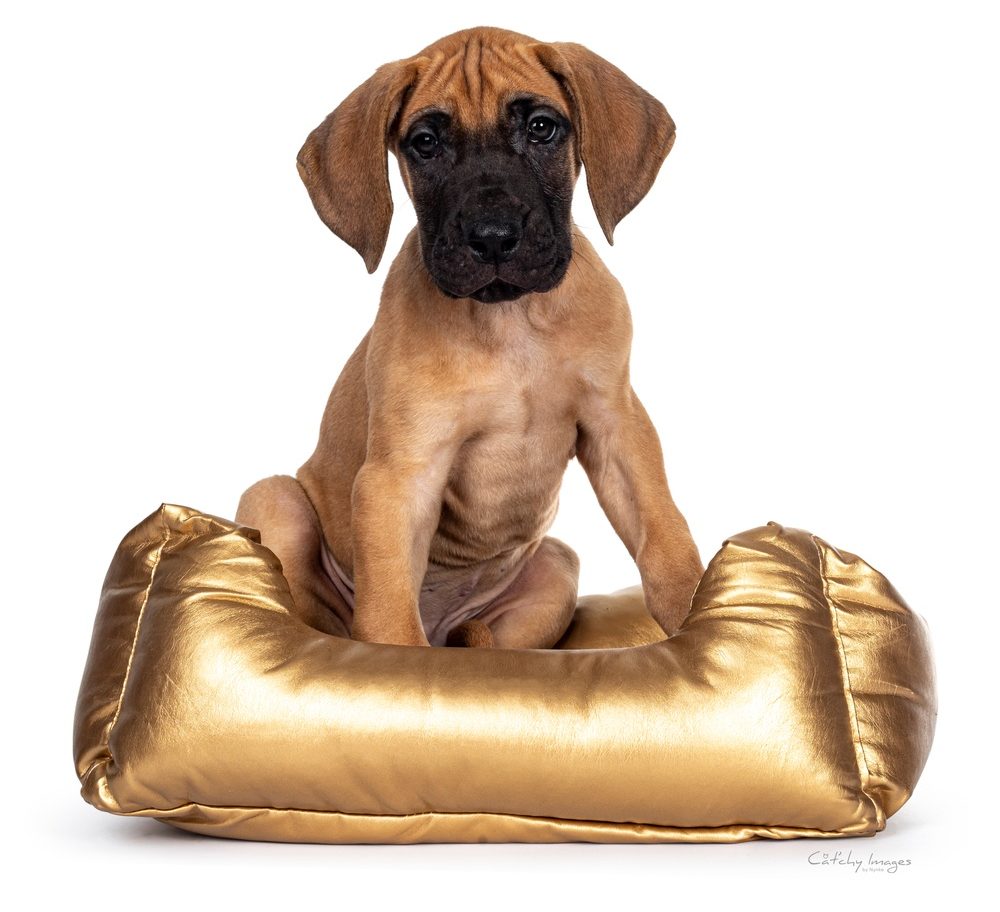 A fine combination of two popular dog breeds – the Golden Retriever and Great Dane – the Great Golden Dane is a relatively recent addition to the designer dog world. Already renowned for their amiable dispositions and great friendliness with both kids and other pets, they’re a medium- to large-sized dog breed that can make a great addition to the homes of anyone who leads an active lifestyle.

While the Great Golden Dane might have the stature and build to be a watchdog, its loving and sociable nature makes it better suited as a companion animal. A gentle giant breed with hearts of gold, they’re more apt to lick someone silly than run them off!

If you’re thinking about adding Great Dane Golden Retriever mix to your home, read on to find out more about what to expect out of life with a Great Golden Dane.

Choosing to bring a dog into your life is a big decision, and one that shouldn’t be taken lightly. As with every designer dog breed, the best way to get to know a Great Golden Dane is by understanding its parent breeds – in this case, the Great Dane and Golden Retriever. Let’s look at each of these in more detail, before covering the Great Golden Dane’s unique combination of their attributes.

The Great Dane, also known as a Boarhound, German Mastiff, or Deutsche Dogge, proudly holds the record as the tallest dog breed. One member of its breed, Zeus, measured an astounding 44 inches tall from paw to shoulder!

Originally bred as a hunting dog in 16th century Germany, the Great Dane was quickly recognized for its friendly disposition and has become a popular choice as a companion animal in the present day. You may recognize them as the inspiration for the classic cartoon character “Scooby-Doo”.

The Golden Retriever, true to its name, was bred with the purpose of retrieving fowl for Scottish hunters in the 19th century. Today, they’re widely employed as service dogs and disability assistance dogs, thanks to their quick wit, friendly disposition, and easy trainability. Golden Retrievers are exceptionally active dogs, sometimes requiring over two hours of vigorous activity per day.

Where does this combination of genes leave our Great Golden Dane, then? Borrowing from both sides of its family tree, the Great Golden is a large (but not giant) dog that is friendly, intelligent, and highly energetic. They get along well with children and other pets and love nothing more than to stay by their owners’ sides all day long as they run, play, and lounge on the couch together.

Rather uncommon even for a designer dog breed, the Great Golden Dane can be difficult to find a reliable source of puppies for. Given the cost of their parent breeds, you’ll likely find Great Golden Dane puppies sold anywhere between $800 and $2500, depending on the pedigree of their purebred parents.

1. Great Golden Danes Consider Themselves to Be Lap Dogs

Almost completely unaware of their own size and strength, Great Goldens will display many of the same behaviors that you would expect to see out of 10-pound dogs – even though they’re about 10 times this big! If you do choose to bring a Great Golden into your home, be prepared for plenty of cuddles any time you sit or lie down.

2. They Keep Growing Longer Than Most Breeds

Owing to their Great Dane heritage, the Great Golden Dane will continue to grow and gain weight well past one year of age. Since most dogs are fully grown by one year old, this can come as a shock to some first-time owners, as their dogs won’t reach full size until nearly a year and a half old!

3. Great Golden Danes Are Quite Easy to Train

Thanks to a combination of the Great Dane’s easygoing, eager-to-please nature and the Golden Retriever’s alert intelligence, the Great Golden Dane catches on to new tricks and commands exceptionally quickly. They love learning new tricks and will eagerly perform for treats or affection.

Great Golden Danes really won the genetic lottery as far as their temperaments and intelligence go. Given their heritage, it’s unsurprising that they are both incredibly friendly and remarkably intelligent. But due to their unique intermixing of traits, these dogs also seem to have developed a keen sense of loyalty that makes them a fantastic companion animal.

These “gentle giants” are especially well suited for living with active families and will revel in the opportunity to receive more attention and affection from more people. They’re not always aware of their size or position in space, however, and should be monitored closely when playing around small children. By no fault of their own, these dogs can be somewhat clumsy and accidentally knock smaller children over.

With even a small amount of socializing when they’re young, Great Golden Danes will adapt easily to life with other dogs. You may occasionally see them boss smaller dogs around, but a firm voice and a small amount of training will stop this behavior quickly. Due to their heritage as hunting dogs, they’re not as suitable around small animals such as cats, rabbits, or rats.

Things to Know When Owning a Great Golden Dane:

If the Great Golden Dane is already sounding like the perfect dog for you, we recommend also considering the following topics related to their health and well-being.

This large dog breed has an equally large appetite and will continue its adolescent growth phase much longer than most breeds. Be prepared to serve them four to six cups of food per day, broken into multiple servings. Depending on the dry food that your vet recommends, budget anywhere between $80 and $120 for food each month for the Great Golden Dane.

Golden Retrievers are some of the most active dogs in the world, while the Great Dane is a much more laid-back sort of breed. Thankfully, the Great Golden Dane lies somewhere in the middle. They are typically happy with around an hour a day of walking or playing in the backyard, with the occasional game of fetch thrown in for good measure.

Great Golden Danes are incredibly responsive to training and pick up on new commands and tricks quickly and easily. Start training them as puppies, and they’ll be more than happy to disprove the old adage about old dogs and new tricks, learning new commands well into old age.

Depending on which side of their family tree a Great Golden Dane takes after, they will have either a somewhat longer and wavier coat or a short, straight one. Either way, it’s best to brush this breed once per day to keep their coat looking its best.

Unfortunately, Great Golden Danes take on the health problems of both of their parent breeds in roughly equal measure. Some potential health problems to be aware of include:

Male Great Golden Danes will be the larger of the two sexes by far, often weighing 20 to 40 pounds more than females from the same litter. Both males and females will display the same general temperament and intelligence, making it easy to choose a sex based on the size of dog you’d like to care for.

The Great Golden Dane is a truly marvelous combination of two already wonderful breeds. Friendly, intelligent, and just the right amount of energetic, they’re a fantastic option for owners who lead active lifestyles and want a companion for life. Due to their status as a relatively rare designer dog breed, it may be difficult to track one down for adoption – but the effort is well worth investing for anyone who loves what the Great Golden Dane has to offer.