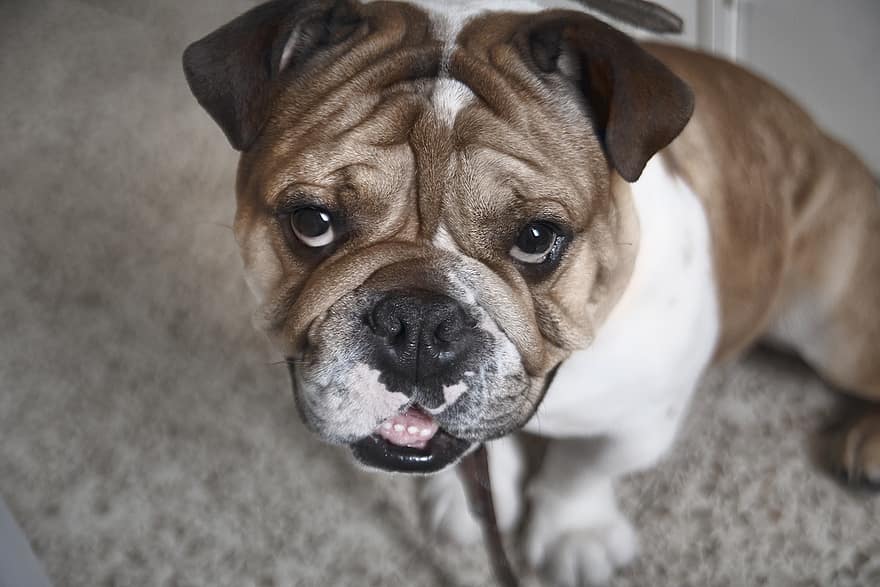 The Miniature Bulldog (also called a Bullpug) is a mixed breed, created by mixing the English Bulldog with the Pug. It has a small but muscular body and a large head. Their faces have folds of skin, and it has a curly tail. Their coat can either be short and silky or short and rough, depending on which parent it takes after.

The Miniature Bulldog is energetic as a puppy but relaxes and becomes lazy as an adult. They are intelligent and often like to cause mischief. They also tend to follow you around from room to room to stay right at your feet at all times.

Miniature Bulldog Puppies – Before You Welcome One Into Your Family..

3 Little-Known Facts About the Miniature Bulldog

1. Bullpugs have a history in the Whitehouse.

Two separate presidents, Calvin Coolidge and Warren G. Harding had the Bulldog parent in the Whitehouse

You can trace Pug parents back to ancient China where it served many rulers.

Temperament & Intelligence of the Miniature Bulldog 🧠

The Miniature Bulldog can have a mischievous side much like its Bulldog parent. However, they are usually quite happy and content to lay around on the couch with a family member and watch television. They don’t usually bark, and when they do, it’s often a sign that they are bored or desire attention. They are very loving and often put on comedy routines to entertain their master.

The Miniature Bulldog is great for families of all sizes, and they especially love playing with children and clowning around to make them laugh. They rarely bark so they won’t be waking you up each night and they don’t require excessive amounts of exercise, so they are also great for small, city apartments.

The Miniature Bulldog gets along well with other animals, and early socialization, when they are young, will help ensure that you minimize lengthy introductions and the getting to know each other period. Once they are fully grown, they are often far too lazy to care about any other pets.

A post shared by Muggsy the Mini Bulldog (@muggsytheminibulldog)

Things to Know When Owning a Miniature Bulldog

Let’s go over some of the things you should think about before you purchase a Miniature Bulldog.

Despite being a Miniature Bulldog, it can still be large when fully grown, weighing up to 40 pounds. Most experts recommend a dry kibble for your pet’s regular diet because it’s a complete, well-balanced meal, and it also helps to clean your dog’s teeth. Look for brands that don’t have any chemical preservatives in them and also avoid products with the word meat byproducts in them.

Follow the instructions on the bag for feeding and split the daily allowance over several meals.

The Miniature Bulldog is active as a puppy but will quickly switch to a life of sleeping on the couch or porch for hours at a time. Very little additional exercise is required, and you don’t want to push them too hard because the scrunched-in face makes it harder for them to breathe correctly.

It’s important to train the Miniature Bulldog at a young age because once they are fully grown, they become extremely lazy and tend to lose interest quickly. Positive reinforcement training is the preferred method, which means to shower your pet with praise and treats. Consistency in training method, as well as the time of day, is also critical to the success of your training. Dogs have poor short-term memory and require repeated attempts to move something into their long-term memory.

Never scold your dog or act negatively during a training session, and that includes your posture and facial expressions as your dog is an expert at reading them. If your pet feels it does not please you, it will quickly lose interest in the training program for something more fun.

A Miniature Bulldog has a short-haired coat that is easy to maintain. You will only need to brush your pet once a week and give an occasional bath if you smell an odor, or they get something on them.

Most mixed breeds have fewer health problems than purebreds due to selective breeding. However, there are still quite a few health hazards that may concern you. We’re going to look at them here.

Cherry eye is a condition that affects the dog’s third eyelid. This condition occurs when the third eyelid becomes mispositioned, resulting in a swollen red eyelid. If your dog is affected by Cherry eye, you will have the most problems while your dog is between the ages of four months and two years. Once your pet is two, the condition seems to fade before going away completely.

Allergies are another problem that can affect your pet. The reaction can be from food, shampoos, etc. or it can come trees dumping pollen in the spring. There are many things your dog might be allergic to, and you will need to distribute and new foods or treats carefully and slowly to prevent this from happening

Dental disease is one of the most common ailments in dogs, including the Miniature Bulldog. Dental disease can lead to tooth loss as well as kidney, heart, liver, and joint problems. It can even reduce your pet’s lifespan by more than a year. Manually scrubbing our miniature Bulldogs teeth once a day, along with regular checkups, is the best way to prevent dental disease from shortening its life.

Pulmonic stenosis is a heart defect that is known to affect all types of Bulldog. Pulmonic stenosis occurs when part of the heart thickens and causes a blockage preventing adequate blood flow. There are a few treatments that can help, and in many cases, the vet will prescribe additional medication after the procedure.

The male and female Miniature Bulldog stand about the same height, but the male is often about 10 pounds heavier. Other than the weight difference, there is no real discernable difference between the two.

The Miniature Bulldog is a great pet for those that are not that active or live in a smaller apartment. It adapts well to different environments, and once it’s fully grown, it’s relaxed and spends much of its day sleeping. It also loves children, and it will spend many hours playing and acting like a clown.

We hope you have enjoyed this quick look at the English Bulldog and Pug mix and have found some endearing qualities that attract you to this breed. If you learned something new and we have helped you find a new pet, please share this guide to the Miniature Bulldog on Facebook and Twitter.