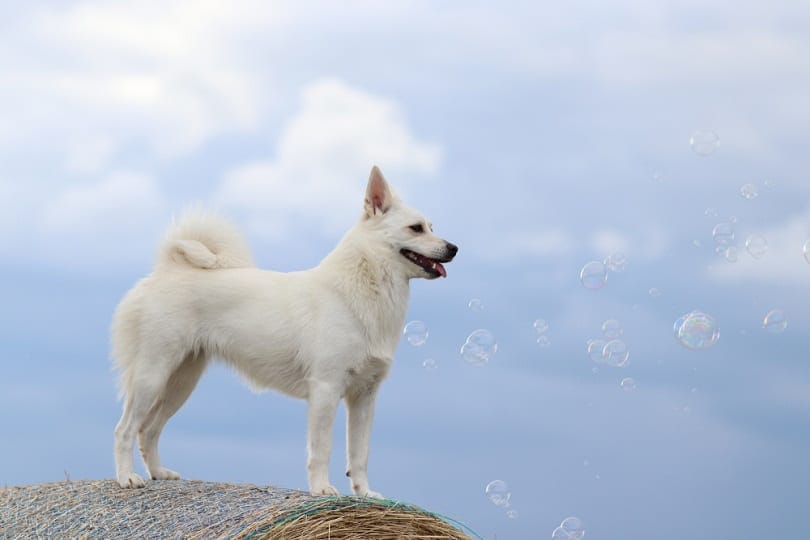 The Norwegian Buhund is an ancient Spitz-type breed that dates back to the Vikings. Their appearance is typical of Northern Spitz-type breed: upright pricked ears, short coarse coat, and a curled-in tail. These dogs were bred in the cold, harsh Scandinavian climate of Norway and can handle cold temperatures with ease. They were bred as all-round herding and guard dog, and in fact, their name is derived from the Norwegian word, “bu,” meaning homestead or farm, and “hund,” meaning dog.

Although their exact origins are difficult to pinpoint, they were developed on the Western coast of Norway and may have been around in Scandinavia since before the time of the Vikings. The Vikings took their Buhunds with them wherever they went, including by sea. The breed is still used widely on farms today, and these dogs get highly attached to their owners, likely due to their close relationship with their Viking ancestors.

Although the Buhund is still fairly rare in the U.S., they are slowly gaining in popularity. If the Buhund sounds like the perfect breed for you, read on for an in-depth look at this ancient breed.

Norwegian Buhund Puppies — Before You Buy…

The Norwegian Buhund is a highly energetic breed that requires a great deal of daily exercise. They also thrive on having a job to do and will benefit greatly from (and perform well in) agility classes and competitions. Before bringing one of these pooches home, you should know that you’ll need to devote a few hours a day to exercising your Buhund, and this is a big responsibility. Without this daily exercise, these dogs are prone to destructive behavior, like chewing, digging, and incessant yapping.

Norwegian Buhunds are still a relatively rare breed in the U.S. and can be hard to find. This lack of availability makes them fairly expensive too, and you’ll likely be put on a waiting list before getting a puppy. These dogs usually have litters of four to eight puppies, so their availability will depend on litter size as well. A responsible breeder will only have a litter once a year, and if there are no other breeders around your area, you may have a long wait.

If you are in the market for a Buhund puppy, you can expect to pay $2,000-$2,500, depending on the breeder and availability in your area.

When considering a Buhund puppy, we recommend visiting with the breeder and viewing both the mother and father if possible. This will help you get a good idea of the pedigree of the dog you’re buying, as well as the conditions that the puppies were raised in.

1. Norwegian Buhunds are an ancient breed.

The exact origins of the Norwegian Buhund are largely unknown, but most experts agree that the breed dates back well over 1,000 years. Excavation of a Viking grave in Gokstad in Norway uncovered the skeletons of six dogs that appeared to be close relatives of today’s Norwegian Buhund. The gravesite was dated to 900 A.D.

2. They made their first conformation show appearance in 1920.

Although the breed has been recognized as a separate breed since the 1600s, it was not until the early 1920s that Buhunds made their appearance as a show breed. This is because they were primarily considered working dogs as opposed to show dogs, and the first official breed club was only formed in Norway in 1939. They made their first appearance in the US in the early 1980s and were only officially recognized by the American Kennel Club (AKC) in 2009.

3. They are popular as hearing dogs.

The Norwegian Buhund has an acute sense of hearing, leading them to become a popular breed as hearing dogs for the deaf. They are specially trained to alert deaf or hearing-impaired owners to common sounds like smoke alarms, ringing phones, or the doorbell. They will then paw their owner and lead them to the source of the sound. Their agility, high intelligence, loyalty to their owners, and ease of trainability make them popular as police dogs too.

Temperament & Intelligence of the Norwegian Buhund

Norwegian Buhunds are active, cheerful, and friendly, with an almost inexhaustible reserve of energy. This means they require regular exercise and mental stimulation to stay happy and out of mischief. They are highly alert animals and make excellent guard dogs, though they are well-known to be non-aggressive and will rarely attack. They will sound the alarm, at least, as they are highly vocal dogs that vocalize in unique ways, including barking, yipping, and yodeling.

They are highly intelligent and eager to please their owners and are thus easily trained. They are sensitive animals, though, so harsh training methods will not work well with a Buhund. They are wary of strangers but usually warm up quickly, and they are highly affectionate, loyal, and loving toward their family.

Yes! Norwegian Buhunds are great family pets. When given sufficient exercise, they are kind and gentle with children and are highly protective of their family. They do not enjoy being left alone, though, and will suffer from separation anxiety if left at home alone for long periods.

Provided they are socialized early, Norwegian Buhunds generally get along fine with other pets and don’t have a strong prey drive, so your cats should be fine! Other dogs can be an issue, though, and Buhunds are known at times to have a strong dislike toward other dogs for no apparent reason, especially dogs of the same sex. Early socialization is key when bringing home a Buhund puppy to live with other dogs.

Things to Know When Owning a Norwegian Buhund

These highly energetic dogs have a massive appetite for their size and will benefit from a diet high in quality animal protein. Dry kibble is fine for these dogs, as long as it is of good quality and has sufficient protein content. Around 2-3 cups a day is sufficient. Be sure to feed them food that is free from unnecessary fillers like wheat, soy, and corn. Due to the Buhund’s ravenous appetite, we do not recommend freely feeding them — they will keep eating until long after they are full!

It’s a good idea to split their meals into two smaller servings. This will help their metabolism and prevent them from gobbling up food too fast and getting bloated.

Norwegian Buhunds are well-known for their inexhaustible energy, and some owners refer to them as “tireless” dogs because it is so difficult to tire them out. They’ll need at least 1-2 hours of intensive exercise every day, preferably more. This should ideally be split into two daily sessions. They are also extremely intelligent and have a long history of having a specific job to do, so mental exercise is just as important.

Whether you enjoy running, jogging, or cycling, the Buhund is the ideal exercise companion and they’ll stay right by your side the whole time. Ball games, fetch, and swimming is also great interactive exercises that will keep your Buhund’s mind working, as well as agility classes and obedience training. The Buhund is happy with whatever form of exercise they can get, as long as they are by your side.

Spitz-type breeds are notoriously independent and stubborn and can be a challenge to train. However, the Buhund is far less so than other Spitz breeds, even though they still retain a somewhat independent nature. Their long history as hard-working companion animals on farms works in their favor, and they are usually highly motivated to please their owners.

Another advantage in training is that these dogs are highly food orientated and will take well to positive reinforcement methods. Their sensitive nature is also well suited to this style of training, as harsh methods will only serve to scare them and make them more reserved.

Early socialization is an often-overlooked key to good training, and this is especially true of Buhunds. These dogs are highly sensitive to their environments and can become distracted easily by other dogs or loud noises. Getting them accustomed to these factors early on will make training easier in the long run.

The Norwegian Buhund has a smooth, coarse, and short coat that is easy to keep maintained. They’ll need a short brushing once or twice a week but do shed heavily twice a year and will need more thorough brushing during these periods. The Buhund has a double coat: a thick, smooth outer coat and a soft dense undercoat that dries easily and sheds mud and dirt with ease. They will rarely require a bath, as a rinse with clean water is typically enough. Shampoos can disturb the natural oils of the Buhund’s coat and should be avoided.

Like all dogs, they’ll likely need a nail trimming every few weeks, and regular teeth brushing is recommended to avoid tartar build-up and dental issues.

In general, Buhunds are a naturally healthy and hardy breed that suffers from a few genetic health concerns. That said, they are prone to conditions that are common among highly active dogs. This includes hip and elbow dysplasia and Von Willebrand’s disease and eye issues such as cataracts.

The final point to consider when bringing home a Buhund is whether to get a male or female.

Females will come into heat every six months or so, which will bring stray males in from all over the neighborhood. Unless you intend on breeding, we recommend spaying females to avoid unwanted pregnancy, and they will generally be more even-tempered as a result. Un-neutered males, on the other hand, will tend to wander in search of females on heat, and this can be a difficult habit for them to break. Neutering males early on will mitigate this behavior and make for a calmer, more passive dog.

Buhunds do have a unique trait of taking issue with dogs of the same sex for no apparent reason. If you already have dogs at home, this could play an important factor in choosing a male or female, but with proper socialization, this shouldn’t be a huge issue.

Remember that all dogs are unique individuals, and their upbringing and environment will have a far larger impact on their character and personality than their gender. The choice is essentially one of personal preference, as both males and females share the traits that make the Buhund such a unique breed: They are all loving, affectionate, and extremely loyal dogs.

The Norwegian Buhund is an energetic and hardworking dog ideally suited for outdoor enthusiasts who have the time to exercise these dogs sufficiently or put them to work on farms herding and guarding. That said, they are loving and gentle dogs that make great family companions, provided that they are not left alone and get the required energy release. They are highly intelligent and usually easy to train, and their acute hearing and love of vocalization make them great watchdogs.

If you are looking for a dog to join you in your daily exercise, the spritely Norwegian Buhund may be the perfect companion.