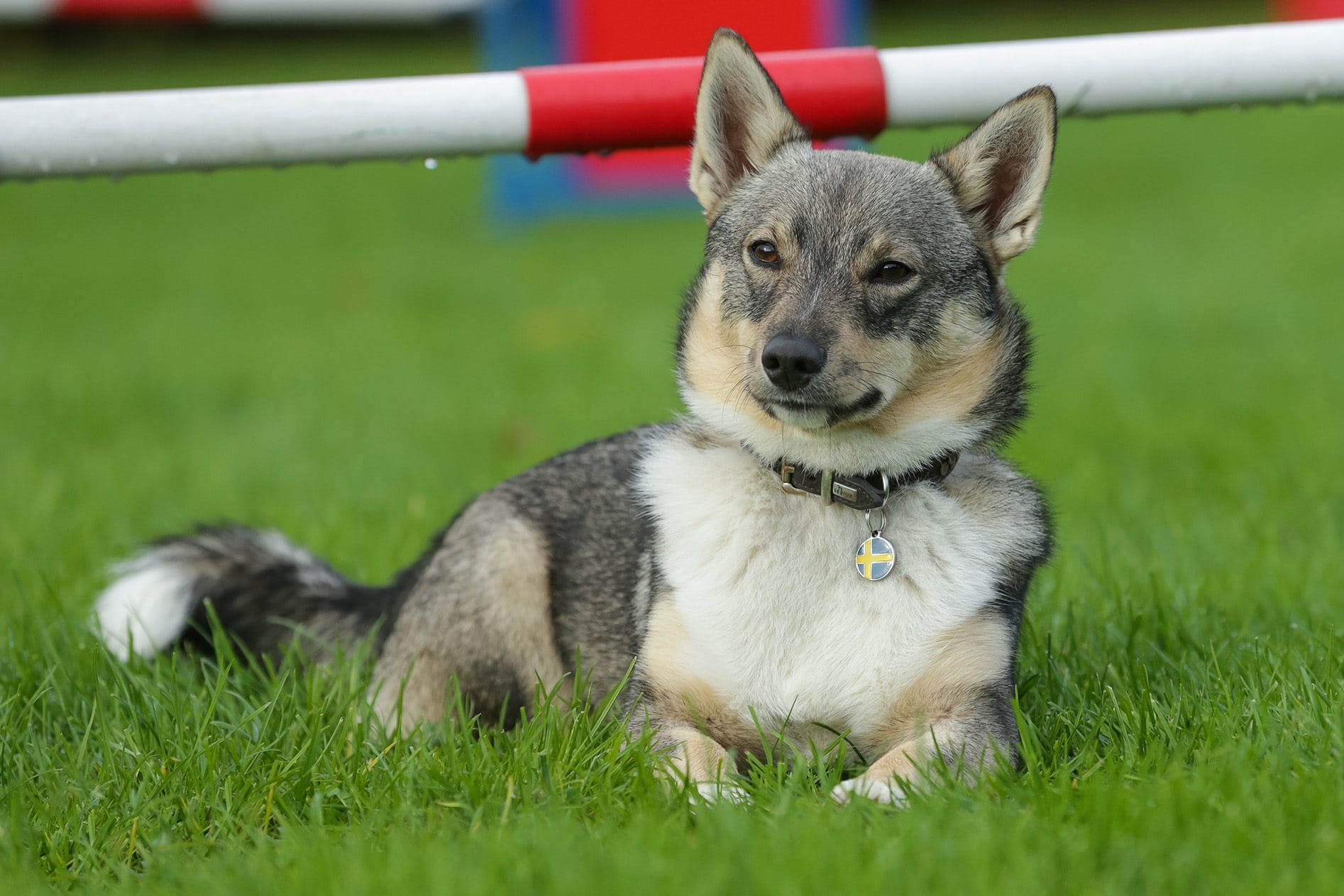 Have you found yourself admiring fluffy, alert, wolf-like dogs? Then you should check out the many spitz-type breeds! These iconic spitz dogs are characterized by perky ears and tails, dense, double coats, and almond-shaped eyes.

Spitz dogs almost all come from arctic climates like Russia, Scandinavia, and North America. They have thick, double coats that are often weather-resistant to keep their bodies warm. And their long, wolfish faces help warm up frigid air as it is inhaled.

Some of the most enduring personality traits of the spitz breed include a highly social nature, bright and intelligent minds, as well as a hardworking attitude. They make capable hunters, farm dogs, and guardians but also love to be part of a family.

Though as many as 50 to 70 distinct breeds exist, here are 14 of our favorite spitz dog breeds to give you an idea of what this category of canine is all about. Here are the best types of Spitz dogs:

Descended from ancient Viking dogs, this low-rider spitz has been used as a herder and cattle dog for centuries.

They are sturdy, thick-coated, and prized for their balance and smooth movement. The exact dates of this breed’s development are unknown, but they are thought to be a mix of the Scandinavian spitz dogs with Welsh Corgis.

One of the most well known of spitz breeds is the Siberian Husky. Originally bred in Northern Asia, these handsome lupine dogs were kept as family companions and high-endurance sled dogs.

Siberian Huskies caught the hearts of Americans in 1925 when a relay team of the dogs traveled a legendary 658 miles in under six days to bring medicine to the sick children of Nome, Alaska.

Powerful, dignified, and highly social, Siberian Huskies are hard working in the field but sensitive and affectionate at home. They also have a mischievous streak a mile wide and are known as escape artists.

The perky Shiba Inu is one of the few dog breeds native to Japan. They were originally used as hunters in the rugged, cold mountains. But after these dogs nearly went extinct during World War II, Shiba Inus have become Japan’s most popular companion breed.

Shiba Inus are compact, well-muscled canines that require moderate exercise. These good-natured and attentive dogs are incredibly adaptable to city or country life.

Fluffy like a cloud and twice as soft, the graceful Samoyed is one of the most easily identifiable of the spitz dogs.

The Samoyeds gorgeous white coats can protect them from temperatures as low as 60 degrees below freezing in their native Siberia – and they brave it all with a smile. They have historically been used as sled dogs, but today they are most commonly companions.

Samoyeds are social, bright, and mischievous pups that need a lot of love and attention.

Norwegian Elkhounds have long been some of Europe’s oldest and most dependable dog breeds. They were farm guardians, shipmates to the Vikings devoted companions, and sometimes hunters and haulers.

Though they look nothing like the droopy scent hounds of warmer countries, these dogs are also champions at scent trailing elk and moose.

Robust in build, with a lush, silvery-grey coat these dogs are known for their friendly but dignified demeanor. Norwegian Elkhounds are hardy, steadfast, and sensitive souled dogs.

Similar to their larger cousins, the Elkhound, Norwegian Buhunds have a long history with the Vikings and cold European farmers. At heart they are homebodies, and their name derives from a Norwegian word that means farm or homestead.

Norwegian Buhunds are adept herders and guarders. As family dogs, they are devoted, affectionate, and bright.

One of the foxy-faced spitz dogs, the Keeshond is square, sturdy, and impressively fluffy. Historically they have been used as barge dogs by Dutch sailing vessels and were both guards and companions.

Keeshonden have long been symbols of Dutch patriotism and are still popular companions in the region to this day. They are medium-sized, sturdily built, friendly, intelligent, and outgoing dogs.

These pups range from small to medium in size and are just as densely coated and curly-tailed as their other spitz brethren. Icelandic Sheepdogs are charmingly friendly, inquisitive, playful, and utterly devoted to their human family.

The Finnish Spitz is thought to have been developed almost 3,000 ago when migrants from Russia brought their spitz-type dogs to Finland. Over the centuries, these dogs were used as all-purpose hunters but specialized in bird-dogging.

These clever dogs have a unique hunting style. When they tree a bird, they mesmerize the fowl with their wagging tail and strange, yodeling barks. The hypnotized – and likely very confused – birds are then easier for hunters to see and take out.

Lively, flame-colored, and small but fearless, the Finnish Spitz is still kept today as a hunter and companion.

Though the name sounds a bit like “lapdog,” these tough and athletic dogs certainly don’t loaf around. Finnish Lapphunds are native to the Arctic Circle and were originally used for hunting reindeer over the vast tundra. Over time they became reindeer herders – a job requiring agility, courage, and smarts.

Finnish Lapphunds are certainly tough, but also some of the sweetest and obliging of spitz companions. They can be a bit wary of strangers but will warm right up once they realize you aren’t a reindeer rustler. These bright, friendly dogs crave companionship and family.

One of the oldest dog breeds known to humankind is the noble Chow Chow. And these dogs have played many roles in their lengthy history.

Chow Chows have been regal companions to Chinese nobility, and even the Emperor of the Tang Dynasty in the 8th century. They have also earned their keep over the centuries as hunters, haulers, and guard dogs. Some of their canine ancestors were even a food source in times of famine.

Today, these compact and powerfully built dogs are most commonly kept as guard dogs and companions. They are distinctive for their blue-black tongues, aristocratic bearing, luxurious lion’s mane, and fastidious nature. Chow Chows are the most serious and serenely dignified of the spitz breeds.

Formerly known as the German Spitz, American Eskimo Dogs were first brought to the United States by German farmers in the 1800s. These clever white pups were all-purpose farm dogs and companions. During the World Wars, however, the name was changed during a time of deep anti-German prejudice.

American Eskimo Dogs have it all – brains and beauty! They are agile, playful, smart, and highly trainable. At one point they were the most popular performing dog breed on the American Vaudeville and traveling circus circuit.

Though they can be reserved when making new friends, Eskies are social by nature and require considerable love and attention.

Alaskan Malamutes perfectly represent the strong, heavy-duty workers of spitz-type dogs. So, it’s no wonder that these immensely powerful canines are one of the oldest sled dog breeds of the Arctic. Experts believe their ancestors to be the domesticated wolf dogs of Paleolithic hunters 4,000 years ago.

Their heavy build, deep chest, and weatherproof coat speak to their hardworking nature. But don’t let that fool you into thinking they don’t have time for snuggles. Alaskan Malamutes are loyal, playful, and deeply affectionate. They need a firm pack leader but well-behaved Malamutes make great family dogs.

Another burly, heavy-boned spitz is the Japanese Akita. Akitas are one of the few dog breeds native to Japan and were originally bred as large, versatile hunters. Though few are used to hunt in the modern-day, they have long been prized for their stout heart and strong work ethic.

Alert and courageous, Akitas are world-class family guardians. These dogs are profoundly loyal, and often intolerant of other animals and wary of strangers.

With their family, however, Akitas are affectionate and silly creatures that crave human companionship. These independent, large dogs require significant socialization and firm but gentle guidance.

Spitz-type dogs are famed for their hardworking attitude when on the job, as well as their sensitivity and sociability in the home.

Whether you favor a pup that’s perky and outgoing, like the American Eskimo Dog, or a quiet guardian like the Chow Chow – there’s a spitz dog out there for you!

How to Quickly Get Skunk Smell off Your Dog

Do German Shepherds Smell? Here’s What You Need to Know!