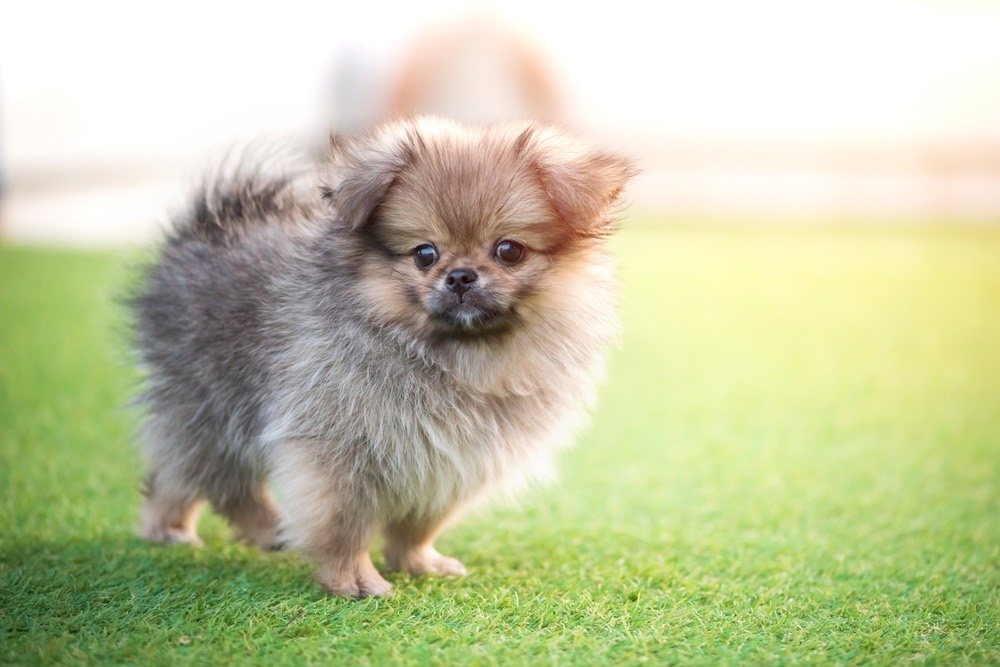 The Peek-A-Pom or Pominese is a cross between the regal Pekingese and the darling Pomeranian. Both belong to the American Kennel Club’s (AKC) Toy Group because of their small size and adaptable nature. These breeds each have a royal past. After all, how could anyone resist their sweet faces and captivating personalities?

The Peek-A-Pom shares some of the most enduring qualities of these breeds. They are loyal and affectionate. Despite their small size, they can stand their ground. They are smart with an active streak that makes them entertaining pets, too. Both breeds have an ancient history that goes back hundreds of years, which speaks volumes about how endearing they are.

The Pekingese bring an outgoing and friendly nature to the hybrid. The Pomeranian lends toughness to the Peek-A-Pom, being one of only three dogs to survive the Titanic sinking. The combination is a winner. These dogs will do well in the city or the country, with families or individuals. You’d have a hard time finding a more affectionate pet.

Peek-A-Pom Puppies – Before You Welcome One Into Your Family…

Each of the parent breeds of the Peek-A-Pom has some special needs and care for the prospective pet owner. Grooming is one challenge you’ll face with the pup’s long, thick coat. The Pekingese and Pomeranian also have some health concerns that may other small dogs share. And to say that they have a lively personality is an understatement.

Peek-A-Poms have a moderate degree of playfulness. Also, early socialization is vital to prevent them from forming bad habits like barking or nippiness. These dogs thrive on attention, so they’ll need an owner that can give them the love they need to be happy. After all, their connection with the aristocracy has taught them to ask, and they will receive.

1. There’s an interesting story from Chinese mythology about the Pekingese.

Legend has it that the Pekingese is a hybrid too, a cross between a marmoset monkey and a lion. The latter is a testament to the fierce temper of the breed. The more vicious and ironically, the smaller of these canines became guard dogs.

2. The petite Pomeranian once had a big job.

Ancestors of the diminutive Pomeranian had several unexpected jobs, including watchdog, herders, and pullers. While today’s Poms are much smaller, breeders through the ages kept their wolf-like appearance and affectionate nature that is characteristic of this canine.

3. Several famous people have been smitten with the Pomeranian.

It’s hard not to fall in love with the adorable Pomeranian. Many famous people have fallen under the pooch’s spell, including Wolfgang Amadeus Mozart, Queen Victoria, Elvis Presley, and even Sylvester Stallone.

Temperament & Intelligence of the Peek-A-Pom 🧠

Meek isn’t a word one would use to describe a Peek-A-Pom. They are sometimes vocal when it comes to getting what they want. You may find that they are often willful, too. However, they are quite affectionate pets and are incredibly devoted to their owners. Their loyalty also makes them good watchdogs. You’ll know when a stranger approaches your home.

The Peek-A-Pom is an excellent family pet in the right home. They will tolerate children as long as they treat these pups gently. Even though they are tough, their small size isn’t a match for roughhousing. They will do best in households with older kids who are respectful of their space. The dogs often become attached to one person but will share their love with the family.

Size is one of the main concerns with the Peek-A-Pom. It’s not as if he would back down from a fight, but rather he’d meet his match with a larger dog. The other thing to remember is the pooch’s need for attention. He may see another pet as a rival that will bring out that sometimes fierce temper in him. Therefore, the best home is probably one with only one Peek-A-Pom.

Another thing to bear in mind is the high prey drive in the Pekingese. That means he’s likely to chase a pet or squirrel that runs away from him. While the Pomeranian in him would likely stay put, the Peke has a moderate degree of wanderlust and will take up the hunt.

Things to Know When Owning a Peek-A-Pom

The main concern rests with obesity. We’re not sure if it’s as much as the tendency of the parent breeds as it is a result of too many treats because Peek-A-Poms are so cute. Nevertheless, it’s essential to keep them on a regular feeding schedule. Smaller breeds mature faster than larger dogs. Thus, you should give your pet three small meals a day of high-quality food to keep his blood sugar levels stable.

A risk also exists on the other end of the spectrum. We suggest not leaving kibble available all the time. A set schedule will allow you to monitor your pup’s appetite better and know exactly what he’s eating every day. Missing more than one meal is a serious matter for dogs of this size.

Neither of the parent breeds is very active or intense. However, you should take your Peke-A-Pom on a daily walk if just around the block in your neighborhood. Think of it as an opportunity to reinforce his socialization skills. Both the Pekingese and Pomeranian can tolerate colder temperatures. Heat, on the other hand, is a problem.

The Peek-A-Pom is intelligent and curious enough to be relatively easy to train. Positive reinforcement is best. Some dogs are sensitive and will cower away from stern reprimands. We also suggest using treats to get these sometimes-stubborn pets to obey and mind their manners. They are reasonably outgoing and willing to please.

Daily brushing is essential for a Peek-A-Pom to prevent matting. You should also check their coat frequently for any signs of redness that may indicate an allergy. You can save yourself a lot of effort by keeping them trimmed short in a puppy cut. It will keep your pet more comfortable if you live in a warmer part of the country.

Perhaps because they are so cute many smaller breeds like the Pekingese and Pomeranian have some health issues due to overbreeding. We strongly urge you to only buy from reputable breeders who do medical screening on their puppies. There are several suggested and optional tests available, based on the particular breed and their genetic history.

While the Orthopedic Foundation for Animals doesn’t recommend specific tests for a Pekingese, it suggests cardiac and patellar luxation evaluations, along with an eye exam due to the Pomeranian’s higher propensity for these conditions.

Male and female dogs are equally friendly and loving pets. The primary difference is the cost of neutering or spaying the puppy if you don’t intend to breed them. The latter is considerably less expensive than the latter. It’s also not as invasive with a quicker recovery.

One look at the Peek-A-Pom, and you’ll realize that he’s a hybrid that had to happen. Their affectionate and endearing nature makes them excellent companions for individuals or families. They are devoted and will protect your home from strangers if just to alert you that something is amiss.

While grooming is more involved, you’ll find that the Peek-A-Pom is relatively easy to train, especially if you are proactive with early socialization. His pampered history means he’ll need and maybe demand your attention. If you are willing to put up with his occasional stubbornness and other quirks, you’ll find a loyal companion for many years.

25 Dog Breeds with the Most Health Issues (With Pictures)