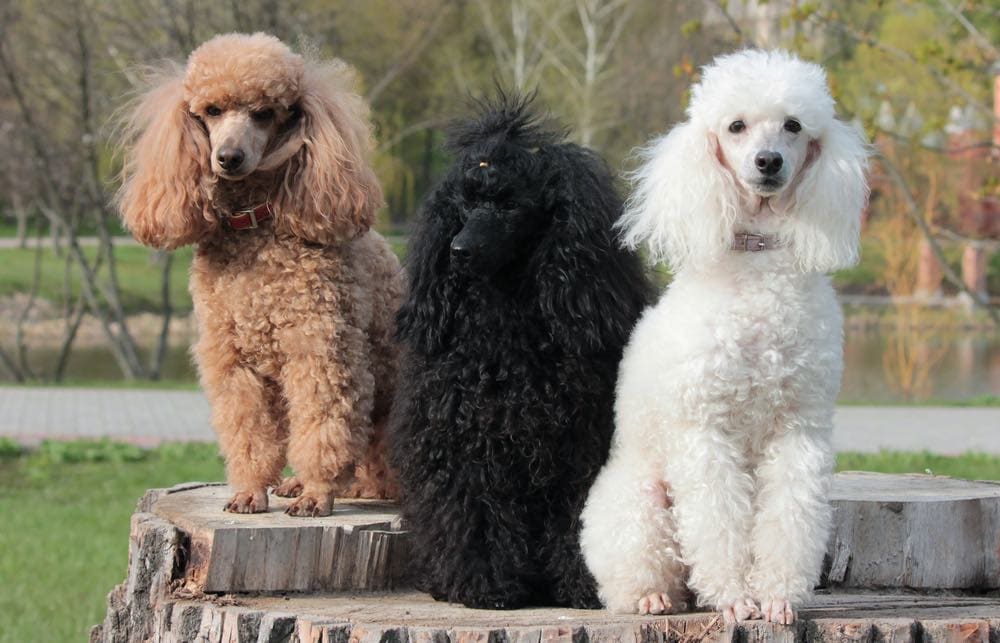 Just like people, every dog has a unique look, personality, and temperament, which is part of what we love about them. Their looks can vary as much as ours, from solid-colored dogs of black and white to mixed dogs that are spotted, speckled, or even tuxedoed!

There are literally infinite patterns and color combinations to be found on canines, but the following 16 are some of the most popular.

The 16 Most Popular Dog Colors, Markings, and Patterns

Solid-colored dogs have just a single color on their entire bodies with no variations. There are no spots, stripes, specks, or anything else. Just a single base color everywhere.

Brown can be confusing as a dog-coat color because there are so many browns in the family. Chocolate, fawn, tan, liver, and more can all be classified as brown. This means that there are loads of popular breeds that fall into this color category, such as Boxers and Labs.

Often, red and brown dogs get confused with each other. That’s because red dogs aren’t really red, they’re more of an orange-brown, shown here with the Rhodesian Ridgeback colors and markings. What’s interesting about red-colored dogs that shows their popularity is how quickly they get adopted. Compared to other colored dogs, dogs with red coats get adopted three days faster on average.

When you think of a gold-colored dog, for most people, a Golden Retriever immediately comes to mind. But just like the color brown, gold is a bit of an overarching color that can encompass other shades like wheat, fawn, honey, and mustard. Think of the Soft-Coated Wheaten Terrier, for instance.

Blue dogs have a very unique and exotic look. They’re also very rare, as only a few dog breeds can sport this color of coat. Great Danes are probably the most popular blue-coated dogs, but Weimaraners, Thai Ridgebacks, Blue Lacy, and a few others can also wear these interesting and distinct coats.

Solid-colored grey dogs are quite rare; even more-so than blue ones. Weimaraners are the only true purebred solid grey canines. But Siberian Huskies are also grey, though the grey is almost always marked with white or black. Still, there are plenty of popular dog breeds with a grey base marked with other colors, including the Alaskan Malamute, Norwegian Elkhound, and Irish Wolfhound.

Most dogs aren’t a single solid color. Instead, many dogs’ coats contain two, three, or even more colors. The way these colors present themselves are referred to as patterns, and the following nine are some of the most popular and desirable patterns around.

Dogs with tricolor coats are sporting three separate colors. A common dog with such a coat is the Beagle, who has a mainly white body with large black and brown spots. Another great example is the Miniature Collie who’s once again black, white, and brown.

Merle patterning is splotches of color over a solid coat. The colored splotches are usually red or blue. The most iconic breed to sport this coat is the Australian Shepherd, though you’ll also find it in Border Collies and American Bulldogs as well.

Harlequin coat pattern is where the base of the dog’s coat is white but there are large black patches all over. The only breed of dog that sports this type of pattern today is the Great Dane. However, other breeds used to display a Harlequin coat, such as the Miniature Pinscher, but it was considered undesirable and so it was bred out.

The tuxedo pattern is where the dog’s coat is one solid color, most often black, with a large white patch that covers their chest and chin. They may also have white patches on some or all of the feet. This gives the illusion of the dog wearing a tuxedo when they’re sitting upright. The most common tuxedo-coated pooch is the Boston Terrier.

Brindle coat color exists when the dog is a mix of black with a shade of brown or gold, usually in a striped pattern that resembles the coat of a tiger. Some breeds that can display brindle coats include Boston Terriers and American Pit Bull Terriers.

Sable-coated dogs have some of the most interesting hair of all. Their hair is two-tone. Not the color of their coat, but each individual hair. The base of the hair, close to their skin, is one color, usually gray, silver, tan, gold, or something similar. However, the tips of the hairs are black, giving the dog the look of having an undercoat of another color. A few breeds with the fur type are the Shetland Sheepdog, Borzoi, and Saluki.

Spotted dogs usually have patches of dark pigment over a base color that’s much lighter. Dalmatians are technically the only truly spotted breed. There are other breeds that look like they have spots, but these are actually considered specks or flecks.

Dogs that appear to have spots but aren’t Dalmatians are referred to as speckled, flecked, or ticked. Generally speaking, their flecks don’t have the same level of contrast to their base color as a Dalmatian’s spots do. Some commonly flecked dogs include the English Setter, Great Dane, and the American Hairless Terrier.

Dogs come in all colors, shapes, and sizes, but they can all make excellent companions and partners. But here’s an interesting thought to consider; your dog’s coat color may actually have an impact on their life expectancy. According to a study by the University of Sydney, Chocolate Labs live 10% shorter lives than labs of other colors. Moreover, they’re twice as likely to have ear inflammation and four times as likely to get dermatitis.

So, while we might think of the unique colors and patterns of pooches as just unique looking and diverse, they might have deeper implications that we’re yet to understand.