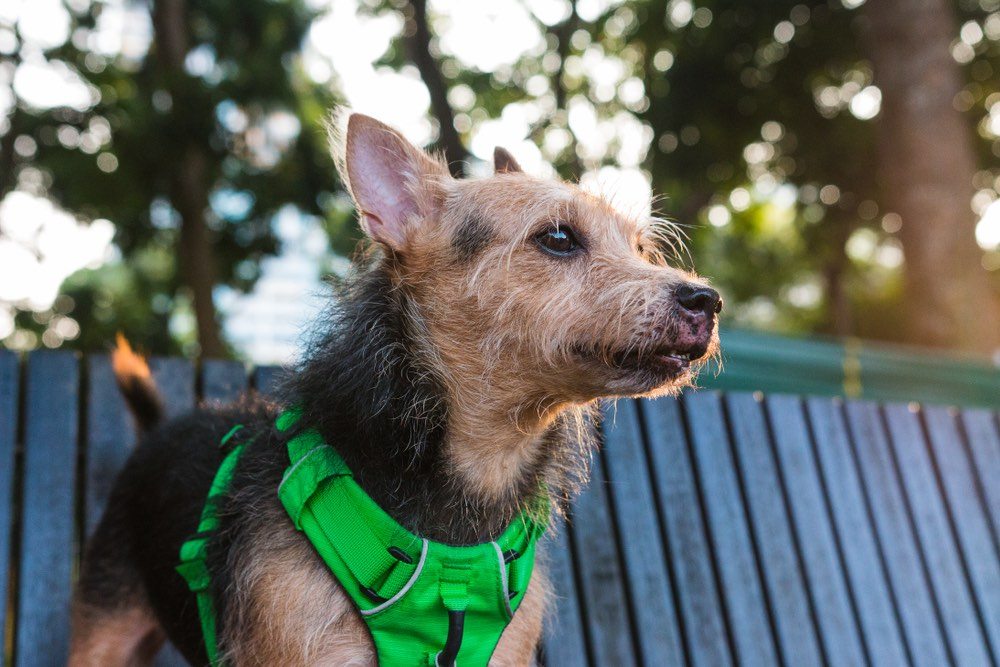 The Rustralian Terrier is not a typo, but instead, is a mix between the Australian Terrier and Jack Russell Terrier. The result is an adorable pup with plenty of spunk to make owning one a joy for any family. While he’s a small dog, he packs a lot of energy in his tiny body. He is a playful pooch, always ready for a game of catch.

In any case, both parent breeds are energetic, happy dogs with lots to give to the right family. They are friendly and not aggressive. They are curious, a trait that their hunting background encouraged. The Jack Russell Terrier gets his name from the Reverend John Russell, who selectively bred the dog for its sporting nature.

Rustralian Terrier Puppy – Before You Buy…

Anyone who has owned a terrier of any type knows that these pups have a lot to say. The Rustralian Terrier is no exception. They are vocal dogs that have no problem letting you in on what’s on his mind. Early training is imperative so that it doesn’t become a bad habit. Also, the pup’s history brings another consideration to the table.

Both parent breeds were hunters of varmints. That strong prey drive still persists in the Rustralian Terrier. It won’t take much for him to seize the opportunity for the chase. Unfortunately, that trait is also accompanied by a high wanderlust potential that some would call tenaciousness. He takes his job seriously and will see it through to the end.

The Rustralian Terrier is a people-dog. He can’t get enough out of time with his family. However, it also means that he doesn’t tolerate being alone and is prone to separation anxiety. He’s liable to bark if he doesn’t get his way, either. This pup does best with a family that can give him the attention that he craves. He’ll return your love with boundless affection.

Both parent breeds have their followers. However, neither one is overly popular on its own. Therefore, you may have some trouble finding a Rustralian Terrier puppy. You can expect to pay around $1,000 or perhaps more. As we mentioned earlier, the hardest thing about getting one is making sure you have the right mix. We suggest sticking with a reputable breeder who will let you see the sire and dam.

Of course, getting any dog is a financial commitment. That first year, he’ll need vaccinations and deworming. Then, you must decide if you’re going to spay or neuter your pet. Your veterinarian can advise you when the time is right for your pup. The surgery will likely be your biggest expense with your new dog.

On average, people spend about $1,381 a year on a dog. After that first year, the cost will probably drop, as long as your Rustralian Terrier doesn’t have any chronic health issues. Food will take up the most in your budget with treats and toys not far behind. We won’t blame you if you want to spoil your pooch. He’s worth every penny you spend.

1. The Jack Russell Terrier is probably the most well-known pup ever.

If you didn’t recognize the name of the breed, you’d likely know the Jack Russell Terrier when you see him. A pooch named Nipper was the model for “His Master’s Voice” by Francis Barraud. The curious pup and the Edison phonograph became the iconic image for several record labels, including RCA, EMI, and UK’s HMV.

2. A Famous Jack Russell Terrier made it into the history books.

The feats of the Jack Russell Terrier don’t stop there. A lucky pooch named Bothy was a canine guest on the Transglobe Expedition, an ambitious undertaking to circumnavigate the globe by surface transportation only. He made history when he became the only dog to visit both the South and North Poles.

3. The Australian Terrier was the country’s first purebred dog.

The Australian Terrier’s history is a story of selective breeding to solve a problem. Rodents were the bane of gold miners, sheepherders, and sailors alike. Crosses between several breeds, including the Yorkshire and Skye Terriers, led to the rugged hunter of pests that we know today. He was also the first Aussie pooch to gain official recognition.

Temperament & Intelligence of the Rustralian Terrier

You know that when you get a terrier, you’re in for a world of fun. These pups live life large. The small size of the Rustralian Terrier doesn’t get in the way, either. He is an intelligent dog that takes his job seriously, albeit with that hint of terrier willfulness. He is laid-back and an easygoing pooch that is friendly with the people he knows.

Are Rustralian Terriers Good for Families?

The Rustralian Terrier is a true family dog. He loves everyone with the loyalty that only this pup can bring into the mix. The Jack Russell in him can be nippy, a bad habit that you should curb early. That’s essential, especially if you have children in the household. He is likely to get excitable during play and may get vocal about it, too.

Do Rustralian Terriers Get Along with Other Pets?

The prey drive of both parent breeds will likely be the scorn of the family cat. The Rustralian Terrier likes a good chase and may instigate it as a form of play. However, this pooch can socialize with other dogs, especially if you introduce him to other pets as a puppy. Otherwise, he’s likely to be high-handed with other canines. That is the key to making this pooch a welcome family member.

Things to Know When Owning a Rustralian Terrier

Now that we’ve talked about some general information let’s get down to brass tacks and discuss everyday life with a Rustralian Terrier as part of your household. For the most part, he is low maintenance. He does prefer the company of people and doesn’t like being left alone. He loves attention and may demand it if he feels lonely.

Small dogs like the Rustralian Terrier mature quickly, compared to large breeds like the Golden Retriever. You should feed puppies three to four small meals a day. That ensures that their blood sugar levels will remain stable to fuel his boundless energy. You can cut it back to two once he’s an adult. We suggest monitoring his weight since he has a moderate tendency toward obesity.

Also, make sure to feed him a diet appropriate for dogs of his size. The different diets account for the varying maturity rates of smaller pups. These foods are more calorie and nutrient-dense to support their metabolism.

The Rustralian Terrier needs plenty of regular exercise to stay fit, mentally and physically. Daily walks are an excellent way to ensure he gets enough activity. It’s also a smart way to reinforce his good leash manners and socialization skills with other people and pets. While this pup can adapt to apartment living, he thrives best with the time outside.

The Rustralian Terrier, like other dogs that hunt, has an independent streak in them. Often, they worked alone, which helped foster this trait. That history also makes him intelligent, so he’s quite capable of learning new commands and tricks. However, you may need to persuade him with treats. We recommend reserving them as training aids for this food-motivated pooch.

The Rustralian Terrier sheds a moderate amount. If he takes after the Aussie, he’ll have a longer coat that you should comb or brush regularly to avoid mats. It’s probably a wise idea, anyway. The inquisitive nature of this pooch will likely lead him down many paths exploring his world. We also suggest checking his ears frequently to avoid ear infections and mites.

Luckily, both parent breeds are relatively healthy dogs, with few significant issues. The Orthopedic Foundation for Animals (OFA) recommends screening pups for conditions that plague many small breeds. They also advise getting an eye examination by a board-certified ACVO Ophthalmologist. Responsible breeders will make sure these tests are completed.

Either sex makes an excellent pet. The male and female Rustralian Terriers are evenly matched in size. Males can be overly assertive with others, especially if left intact. We recommend spaying or neutering your pet, based on the advice of your veterinarian. Some breeders require it as a condition of selling a pooch.

The Rustralian Terrier is a handful to be sure. He is a lot of dog in a small body. You can even say that he doesn’t realize how little he is, either. His energy and friendly nature are infectious. While he may try your patience sometimes, he’ll reward you with his loyalty and unwavering devotion. This mixed breed pup brings the best qualities of the Terrier Group in an adorable package.