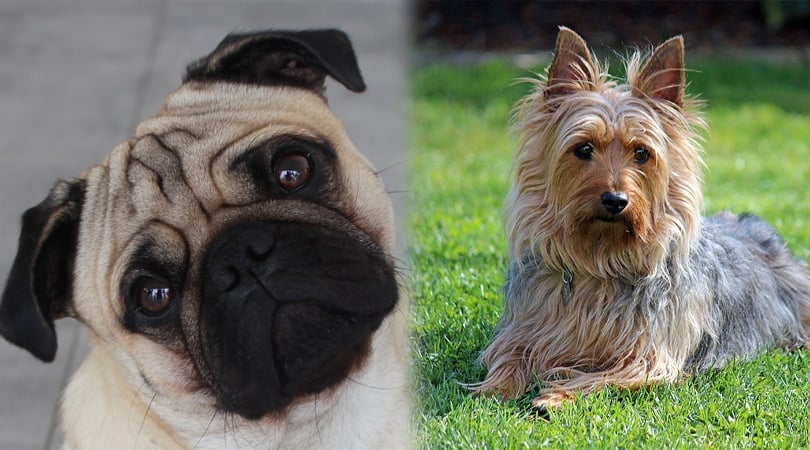 The Silky Pug is a mixed breed pup, a cross between a Silky Terrier and a Pug. They are not extremely common. They are a small dog because both of the parental breeds are considered toy dogs.

These little dogs often inherit a mischievous side from their Terrier parent and are friendly like the Pug. If they are socialized from an early age, they will do well with almost anything they encounter.

A stubborn streak is present in both breeds, so they are not the best choice for a first-time dog owner. These dogs are not hypoallergenic and will need grooming attention.

Silky Pug Puppies — Before You Buy…

Several factors affect the price of a Silky Pug, much like any other breed. One of these is the popularity of the hybrid, as well as their parents.

The Pug remains one of the most popular dog breeds in the United States and even throughout Europe. The Silky Terrier is popular in both, although the Yorkshire Terrier often outshines these little dogs.

Since both of the parents are well-loved, there are plenty of breeders for both. That means that the hybrid is not difficult to find. Since they are relatively common, their price goes down.

The other significant factor that affects their price is the breeder and their reputation. Breeders who have worked to develop a stellar reputation in their surrounding community will often be able to charge more. It is usually worth it because they treat their dogs exceptionally well and breed them with the care respective to the parental breed’s pedigree.

There are several things to do before finalizing the adoption to ensure that the breeder you have chosen treats their dogs well and gives you the puppy with the lineage you want. Ask to get a tour around their breeding facility. Every breeder should be happy to provide you with a tour around any part of the facility that they allow their dogs into.

Before adoption, ask to see the proof of the parent’s breeds. Doing so gives you confirmation that they are the breed you want. Finally, verify their health and any potential issues by checking out their vet records. The breeder should have a complete history to give you.

These aren’t necessarily a deal-breaker, but they can help prepare you for any issues that your puppy could suffer from and alert your vet.

3 Little-Known Facts About the Silky Pug

1. Silky Terriers were from Australia not long ago.

Most of the time, we assume that our hybrid dogs’ purebred parents have been around for hundreds of years. Often, part of the purpose of crossing dog breeds is to give them greater hybrid vigor.

Yorkshire Terriers were not native in any way to Australia. Instead, they were brought over from England when higher class people began to move to the continent. Other ancestors included in their lineage are the Dandie Dinmont Terrier, the Skye Terrier, and perhaps even the Cairn Terrier from Scotland.

The Silky Terrier began to be crossed during the 1890s, but they were not recognized as a distinctive breed until 1906 in New South Wales in Australia. The news caught up and became accepted in Victoria in 1909.

The Silky Terrier didn’t make it out of the Australian continent for the most part until after World War II. American soldiers then began to take them home when returning from the war, and breeding clubs were formed on American soil.

2. Pugs are one of the older dog breeds in the world.

Pugs contrast the Silky Terrier’s relatively recent history because they are one of the oldest breeds in the world. They originate from China, with their roots dating back to 400 B.C.

They were regarded as the favorites of the royalty in the Imperial palaces of China. They were incredibly spoiled here. Some of them were recorded to have had mini palaces of their own, and many had personal guards to keep them from being dog-napped.

Pugs used to be larger than they are now. They were not only royalty in China but were also kept as pets and guards by Buddhist monks and the Tibetan monasteries of old.

3. Pugs have been companions to many prominent historical figures.

Pugs have been a companion dog for as long as their history goes back. Part of the reason for this is that they are exceptional at making people feel loved and appreciated. They have adorable personalities and unique physical characteristics that set them apart from most other breeds.

Many noteworthy people throughout history have been proud owners of a Pug. Some of these include the Prince of Orange in 1572, Marie Antoinette, Josephine Bonaparte, Queen Victoria, and Goya.

The Prince of Orange held these dogs in the highest regard as it is said that one saved his life. At a crucial point in history, his Pug alerted him to oncoming assassins in enough time to save him and his family.

Marie Antoinette had a Pug that was said never to leave her side. She named the dog Mops, and the dog came with her even to the end.

Josephine Bonaparte owned a Pug named Fortune, of whom Napoleon was said to despise. The reason for this hatred was that the Pug supposedly bit him the first time that he tried to come to Josephine’s bed.

Queen Victoria bred these dogs and is largely credited for developing the small toy size that they come in today.

Temperament & Intelligence of the Silky Pug

The Silky Pug does not have a developed breed standard yet, so it can be difficult to know exactly what kind of temperament your puppy will have. However, looking at the Silky Terrier’s combined traits and the Pug’s allow you to glean a relatively accurate picture.

These little dogs are likely to be quite friendly and affectionate to the people they love. They often thrive with plenty of human interaction and might suffer from separation anxiety if left alone for too long. Silky Pugs can have streaks of a territorial nature in their personalities. Socializing them early on is the best way to teach them how to behave properly around other people.

The Silky Pug might be a small dog, but they are smart and always on the alert. These characteristics can make them an excellent watchdog if their training is right.

These little dogs can be a good choice for families, particularly those with older children. In them, the Silky Terrier makes them not that patient with rough handling that can come from younger children.

No matter what age the puppy or the kids are, it is essential to teach them proper behavior. It is best not to leave them alone for extended periods, especially early on after introductions.

The Silky Pug can get along with other pets if socialized appropriately. They do not have too high of a prey drive, but it is still necessary to exercise caution when introducing them to other animals, especially those smaller than they are.

Things to Know When Owning a Silky Pug

The small size of the Silky Terrier makes their food budget quite manageable. They only need approximately 1 cup of food each day. If they get more exercise, they might want a little more. However, Pug genetics can make it easy for them to gain weight quickly.

Never free-feed these dogs. Instead, assign your dog specific mealtimes. It is best to split their meals evenly, putting one in the morning and evening.

Small dogs can struggle with indigestion, which can be harmful if it becomes a frequent issue. Spacing out their meals and splitting the amount of food helps them avoid this problem.

Pugs have a proclivity to suffer from food allergies. If your pup begins to display any symptoms typical to allergies, then carefully monitor their intake. You need to isolate the cause of their allergy as soon as possible to protect their health.

Silky Pugs are considered a medium-energy dog. However, if they inherit the Pug’s brachycephalic faces, they will not be able to engage in physically demanding exercises. They will wheeze and struggle to get their breath if pushed too hard.

Take them on slower walks or to the dog park. If you enjoy going out for walks, try to aim for a distance of 5 miles each week. To stay healthy, the Pug should get around 45 minutes of activity each day.

Training the Silky Pug can be difficult if they have a strong, stubborn streak. This trait is what doesn’t make them a great pup for first-time owners. You need plenty of patience when training these little dogs. Make sure you stay as consistent as possible.

Rewarding them with plenty of positive reinforcement helps encourage them to keep behaving in similar ways. They want to make you happy, so it is important to communicate this happiness with them.

Silky Pugs can inherit more of the coat from the Silky Terrier or the Pug. If they have a Pug’s coat, it will be fairly low-maintenance, since it is short and more wiry. They would have a double coat, though, which sheds quite a bit. As long as they are brushed multiple times a week, it will remain manageable.

If they inherit the Silky Terrier coat, they might be regarded as hypoallergenic, although it is unlikely. Their hair will be longer and silkier. They will need semi-regular grooming for it to stay healthy.

Other than grooming their coats, they need attention to their ears, nails, and teeth. Clean out their ears once a week to prevent ear infections. Use a soft cloth to clear out moisture and any debris gently. Brush their teeth at least once a week, preferably daily. Clip their nails whenever necessary, typically when you can hear them clicking against the floor as they walk.

The Silky Pug is less healthy if they inherit the face of the Pug. If not, they won’t struggle as much with breathing and eating properly. Continue to visit the veterinarian annually to ensure the continued health of your puppy.

There are currently no recognizable differences between males and females in this breed.

The Silky Pug is an excellent choice for a family who has experience with pups and knows how to train and act around them. They are highly affectionate dogs and love to explore new areas. They make great additions to someone’s life if they need a companion dog.

Depending on which parent they favor, you will need to monitor their breathing carefully and their food intake. If they ever seem to have negative symptoms, take them to the vet right away. 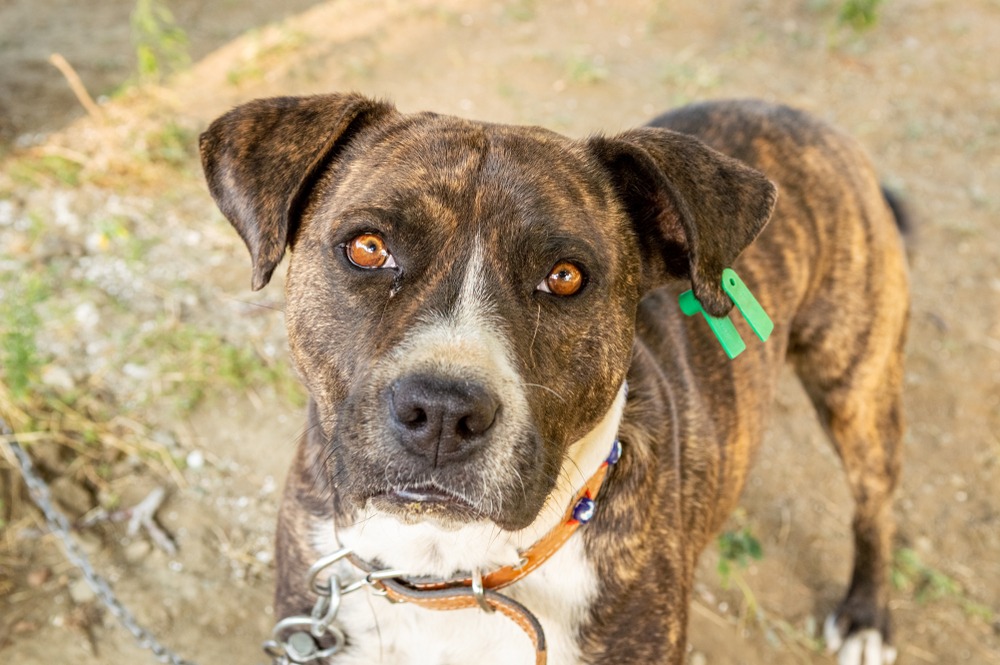 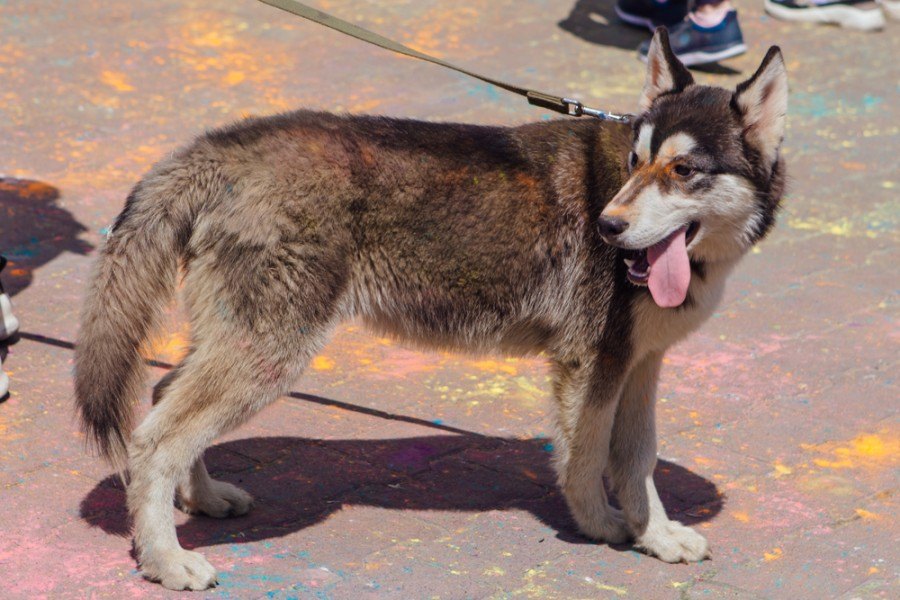 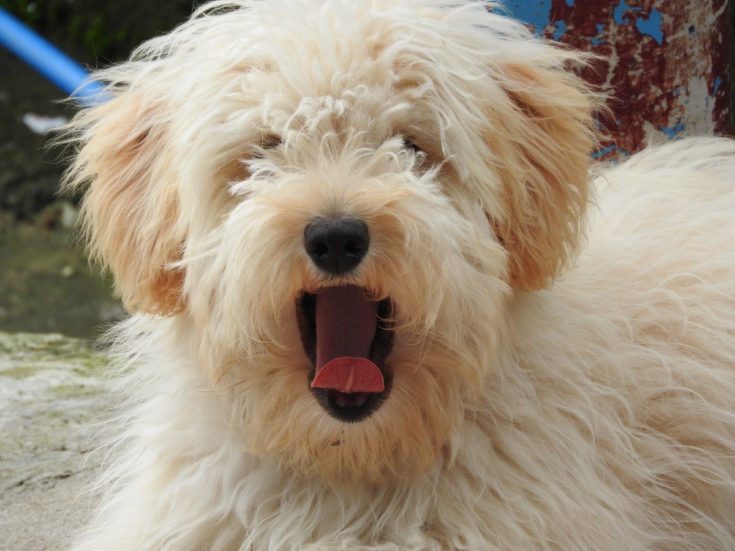