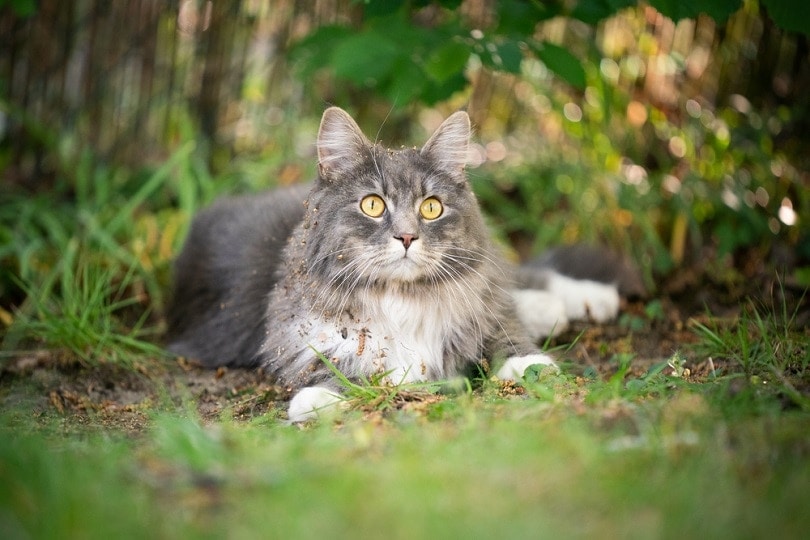 When it comes to cats, some of the first things to come to mind are probably words like cute, small, or maybe even delicate. And, while there are plenty of small, cute, delicate cat breeds out there, there are also plenty of cat breeds who bring to mind words like strong, large, and athletic.

If you’ve always wanted a pet tiger or lion to play with due to their strength, you may find one of the cats below to your liking. They may not be quite as big and strong as their wild feline counterparts, but these cat breeds are certainly not lacking in the strength, size, or athleticism departments!

Take a look at some of the strongest cat breeds in the world below!

The 17 Strongest Cat Breeds in the World

Here we have, in no particular order, 17 of the strongest cat breeds in the world.

Possibly one of the oldest cat breeds, this strong cat (also known as the Aby) is highly athletic. You’ll find them to be constantly in motion, whether it’s jumping, running, or climbing. Appearing in the U.S. for the first time in 1935, the Abyssinian is clever, silly, and a bit of an attention hog.

When you first see a Bengal, you might think they’re a wild cat, but they aren’t! However, they were bred to meet the need of people who wanted to have wild cats in their homes. First bred in 1963, the Bengal is a cross between Domestic Shorthairs and small Asian Leopard cats. Weighing anywhere from 15-18 pounds, these cats won’t sit still, preferring to play, climb, and even swim.

A newer breed of cat that originated in the U.K., the Burmilla has only been around since the 1980s when it appeared via accidental mating. Though compact, they have strong muscles that help them enjoy their love of play. Burmilla are exceptionally sweet and tend to retain the mischievousness of kittenhood well into adulthood.

The Chartreux is one of the oldest breeds in the world, but its exact origins are unknown. We do know they are a rarer breed from France and were first mentioned in 1558 in a French poem. This breed is large and quite muscular, with lightning-quick reflexes. Here is an interesting fact: Chartreux are very quiet, with some even being mute.

Sometimes called the miniature cougar cat, the Chausie is a large, muscular cat that can top out at 25 pounds. They are extremely agile and seem to have constant energy, so they’re happiest when someone is home to play with them. This breed goes back to ancient Egypt, where Egyptians regarded them so highly that some people had their Chausies buried with them to be companions in the afterlife.

The Egyptian Mau is quite possibly the strongest and fastest cat breed globally. Though lithe, they have incredibly athletic bodies and a gait like a cheetah. This breed has been known to run up to 30 mph! They’re incredibly intelligent and incredibly loyal to their humans. You’ll notice that the Egyptian Mau looks similar to the cats drawn in ancient Egyptian art; this is because they are likely descendants of the first domesticated Egyptian cats.

Originating in Thailand, the Korat is also known as the “good luck cat”. Despite being smaller with a low amount of body fat, they are surprisingly heavy. The Korat is also highly active and playful, quite vocal, and develops fierce bonds with its humans. It is another of the older cat breeds around and is unique in that how it looks hasn’t changed much throughout history.

Maine Coons are large and fluffy, making them excellent cuddlers. They can also be quite long—more than one Maine Coon has held the Guinness World Record for the longest domestic cat in the world! This breed is known as the gentle giant of the cat world.

You likely know this breed as the one with no tail, though some do have short, stumps of tails. Manx are fast with quick reflexes and have extremely powerful jumping capabilities. Though there are plenty of myths about why these cats are tailless—from mother cats protecting kittens from raiders by cutting off tails to tails getting slammed in the door of Noah’s ark—most likely it’s because of a genetic mutation.

This giant breed that weighs up to 22 pounds is not only muscular but has an oversized coat that makes them appear even bigger. You’ll find these cats mentioned plenty in Norse mythology and folktales. They are thought to have been brought to Norway by Vikings who carried them on their ships to get rid of rats.

Ocicats were bred from a mix of Siamese, American Shorthairs, and Abyssinians, specifically to create a cat that would be solid, muscular, super-fast, and agile. Essentially, they were another attempt at creating cats for those who wanted their own wild cats. The Ocicat is hugely active and quite the talker; they also love to be the center of attention!

You might not expect these floppy kitties to be on the list, but these cats are actually one of the larger, muscular breeds – particularly the males. They originated in the U.S. in the 1960s and are known for their affectionate and sweet natures.

This hybrid breed is a cross between domestic cats and an African wild cat known as the serval. Becoming popular in the late 1990s, this breed is strong, long, and tall. They are rather talkative, but only in a quiet chirping way. They are extremely active, pretty much from day one, always wanting to play or interact in some way.

One of the older cat breeds around, the Siamese has a colorful history full of drama and superstition. They are long and lean but quite muscular and amazingly active. You’ll find they always want to play or get into something, and they’re likely to follow you around to join in every activity you do.

This centuries-old breed is thought to be the ancestor of the entirety of modern long-hair breeds. Muscular and athletic, the national cat of Russia is quite the adventurer – one who likes to make giant leaps and climb great heights within the home. You can train them to do tricks or keep them entertained with plenty of toys to avoid having them scaling the walls.

Also called the Sokoke Forest Cat, this breed is what is known as a natural domestic breed (or one that came about on its own through adaptation). Originating in Kenya, this tabby cat is unique with its camouflaged ticked pattern. Not only do they have strong muscles, but they also have quite long legs. The Sokoke has a gait that is distinctive, making them very graceful.

A sibling of the Abyssinian, the Somali looks similar but has long hair rather than short. They’ve been compared to monkeys with their active, get into everything nature. The Somali is not actually a native of Somali but is most likely from Southeast Asia. With their muscular bodies and legs, they often look like they are standing up on their tiptoes.

While this list doesn’t contain every strong cat breed in the world, if you’ve been looking for a feline that’s more solid and wild than delicate, this list is a great starting point. No matter your preferences when it comes to cats, there’s something for everyone here. Some cat breeds listed are rarer than others, so you may have a bit of trouble finding them, but others are some of the most popular breeds around.

Find a strong, athletic cat that’s right for you, and enjoy the fun and activity they bring to your life.

Why Do Cats Like Shoes So Much? 6 Reasons for This Behaviour

Why Do Cats Spray on Their Owners? 6 Reasons for This Behavior