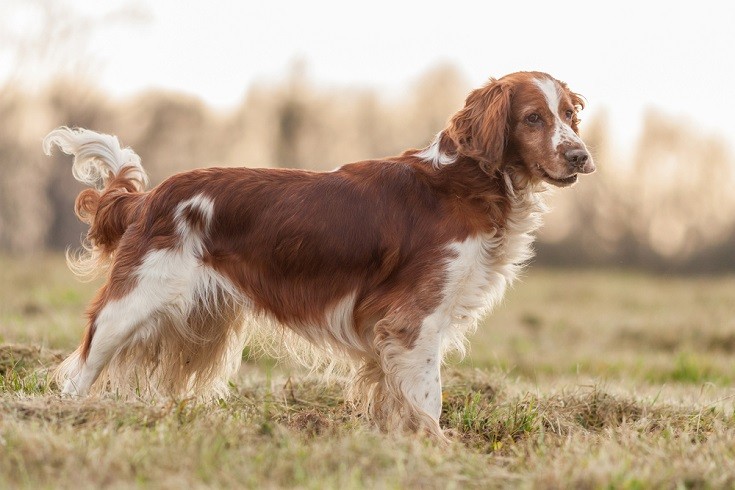 The Welsh Springer Spaniel is an old breed that has existed since at least the 1600s. Bred originally for shepherding and cattle droving in the Welsh Highlands, they quickly became popular throughout England and Wales, where they later became gundogs that were used for flushing out, or “springing,” game birds and waterfowl.

Today, the breed is popular worldwide, and in addition to their hunting role, they’ve become popular family pets and companion dogs.

The Welsh Springer Spaniel is renowned for their devotion and loyalty, earning them a reputation of being a dog that needs to be with their owner every moment that they’re home.

Welsh Springer Spaniel Puppies — Before You Get One

If you are looking for a devoted pet that craves human attention, you really can’t do better than a Welsh Springer Spaniel. These medium-sized dogs with a friendly and happy disposition quite literally live for their owners and will want to spend every waking moment being with and around them.

While this extreme, almost obsessive, devotion may sound ideal to some people, it’s also easy to see how it may also be a little off-putting.

Of course, there is much more to this breed than their need for human companionship. They’re also highly energetic, intelligent active dogs that need a great deal of exercise and mental stimulation and more than the average amount of grooming. In short, the Welsh Springer Spaniel is not a part-time dog. To own one of these dogs, you need to be all in, as your pet is truly about to become your new best friend forever.

While both breeds share a similar look and similar background, the two breeds are completely individual and unique dogs with quite different temperaments. Of the two, the English Springer Spaniel is by far the more common and popular in the United States, and this often leads people to assume that the two breeds are the same dog.

2. All Welsh Springer Spaniels Are Red and White

3. The Welsh Springer Spaniel’s Eye-Catching Coat Is More Than Ornamental

Welsh Springer Spaniels are loving and friendly dogs that love human companionship. They are less outgoing than the English Springer Spaniel and can be almost shy or a little circumspect around people they don’t know.

Around their home and people whom they know, they are exceptionally calm dogs and are fantastic with children of all ages.

Yes, the Welsh Springer Spaniel makes a great family pet. They are patient and even-tempered dogs that are gentle and affectionate with children. They are quite active, though, so it is important to keep an eye on them around young children and toddlers, as they may unintentionally knock them over.

Despite their beautiful personalities, the Welsh Springer Spaniel is not at all suited to life in an apartment. They are highly active dogs and need to live somewhere that has access to a secure fenced in yard in which they can run around and play.

Welsh Springer Spaniels have a highly developed prey drive. As such, they tend to chase smaller animals, and may not be the best choice of dog for a house that has several other pets.

If you must have another dog or a cat, it is a good idea to get them when you get your Welsh Springer Spaniel, as when raised together with another pet, you are far less likely to have any problems.

Things to Know When Owning a Welsh Springer Spaniel

When it comes to food, it is important to remember that dogs are individuals, and just like people, they don’t all need to eat the same quantity of food. Rather, the amount of food your dog needs to eat should be determined by their age, size, metabolism, and activity level.

A highly active medium-sized adult dog is doing to need to eat more food than an older dog that spends most of their day on the couch, and their needs will be different again to a growing puppy. Hence, it’s important that when looking for dog food, you should find one that offers a variety of different products, formulated to meet the needs of your dog throughout their life.

There are quite a variety of types and brands of dog food on the market. We recommend that you feed your Welsh Springer Spaniel high-quality dry dog food that has been specifically formulated for Spaniels or active medium-sized dogs. It should come in a variety of options for puppies, adult dogs, and senior dogs. Over the years as your dog moves through their various life stages, you should progress them through these different foods.

Of course, if you have any questions or concerns about the best dog food to give your dog, the best person to speak to is your vet, who will be able to provide specific nutritional advice tailored to the needs of your pet.

Welsh Springer Spaniels are active dogs that need to get a great deal of exercise to keep them fit and healthy. Like people, these dogs tend to put on weight quite quickly if they eat the wrong foods and lead a sedentary life, so taking them for a long walk, a run in the park, a swim, or even getting them involved in dog sports such as agility training can be good for both dog and owner alike.

Remember that interaction with their human family is the key to having a happy Welsh Springer Spaniel. In this regard, your dog will most enjoy activities that they can do with you. Play sessions in a fenced yard will be far more enjoyable for a Welsh Springer Spaniel than a session running around a dog park with other dogs. Likewise, running with you will be more enjoyable than taking a long stroll with a paid dog walker that they don’t know.

Exercising their mind is equally as important as physical exercise, and a Welsh Springer Spaniel will also enjoy dog puzzles or tracking games in which you hide treats for them to find.

Due to the overwhelming desire of a Welsh Spring Spaniel to please their owner, basic training will be a breeze with these dogs. Before long, you will likely find yourself signing your dog up for advanced obedience or agility training.

The only thing to remember is that these dogs can be quite emotional and don’t respond at all well to harsh criticism or abuse. Hence, it’s vitally important to ensure that you praise and reward them when they get things right; simply ignore inappropriate behavior or responses. Ignoring them when they do something wrong will be more than enough of a message to your Welsh Springer Spaniel that you aren’t pleased, and they will inevitably do everything they can to make you happy with them again.

To keep their striking red and white coats looking their best, a Welsh Springer Spaniel will need grooming at least once or twice a week.

The breed has a thick and luscious double-coat that will shed quite a bit throughout the year, and they will shed their undercoat at the start of each summer and again at the beginning of winter. When this happens, it will take several hours with a stripping comb to remove all the loose fur from their coat.

In addition to regular grooming, a Welsh Springer Spaniel needs to have their ears checked and cleaned regularly, their teeth brushed with canine toothpaste about once a week, and their nails clipped every few weeks to prevent them growing too long and breaking.

The Welsh Spring Spaniel is generally an extremely healthy breed, and over the years, many of the hereditary diseases that affect other breeds have been almost totally eradicated through careful and responsible breeding.

Provided that they’re well looked after, adequately exercised, and fed a nutritionally balanced diet, there is every chance that they will live a long and healthy life.

Of course, there are conditions to which the breed still predisposed, and it is a good idea to know what these are.

There is little difference between the temperament of a male and female Welsh Springer Spaniel. In size, males will be a little taller and heavier, but as they are only medium-sized dogs, this hardly makes any difference.

As such, unless you have a particular preference for a male or female dog, we recommend that you should speak to your breeder and have them help you choose a puppy based on their temperament and energy level rather than their sex.

The Welsh Springer Spaniel is an outstanding dog for anybody who wants a true canine companion. They are highly active dogs that simply adore their owners.

Easily trained and only needing a moderate amount of grooming, the breed is a relatively easy dog to look after, and provided that you have the time to spend with them, a Welsh Springer Spaniel is suitable for both novice and experienced dog owners alike.