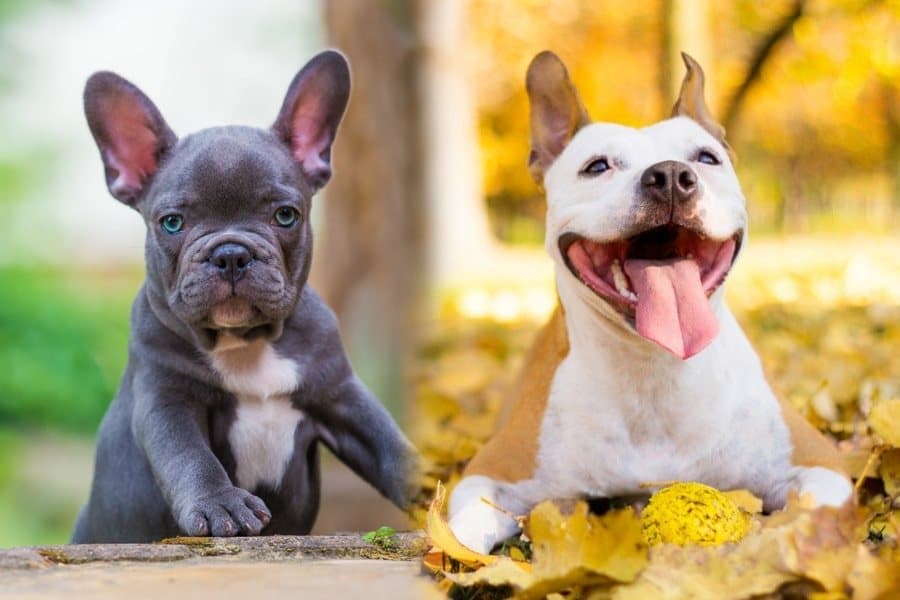 Buying anything will take a lot of research and consideration, no matter what it is. This is especially true when you are bringing a new pet into your home. All dog breeds are different. So you want to make sure that you are choosing one that’s best for your lifestyle and family.

American French Bulldogs are produced when an American Bulldog and a French Bulldog breed. They are known for being affectionate, friendly, protective, and loyal.

If this dog appeals to you, we have created this guide to help you know what to expect with this adorable breed.

When you are looking for a dog, it’s important to know what you should expect before making a decision. That’s why we will go through all of the important things to know about this hybrid dog.

When you are looking for an American French Bulldog puppy, you should expect to pay anywhere from $800 – $3,000. However, the higher quality can go for $5,000 or more.

Based on what you want, the price is going to be a wide range. Because they are rather expensive, you should take a lot of time looking for the right puppy, which means researching the breeders as well.

When you find an affordable puppy, make sure you talk with the breeder about the parents of the puppy and meet the parents and see the kennel.

Since these puppies aren’t very common, you don’t want to jump right in without doing the research. When you meet with the breeder, the kennels need to be clean and the dogs should be well cared for. You also should check the way that the parents are behaving, since this can give you an idea of how your puppy will behave.

1. French bulldogs came from England, and they are miniature versions of English Bulldogs

2. French Bulldogs were taken to France by the craftspeople who got driven from England due to the Industrial Revolution.

3. American Bulldogs have difficult pasts since they were used in things like bull-baiting for entertainment and gambling.

American French Bulldogs are gentle and caring dogs with a strong sense of devotion and loyalty to their family. They love being with their humans, and when they are apart it can cause separation anxiety.

They are trustworthy and reliable when around a young child, particularly when they are socialized young. As an owner, you need to be firm and strong, otherwise, you might wind up with an intolerant stubborn dog.

Yes, they are great with kids.

Do American French Bulldogs Get Along with Other Pets?

Yes, they are fine with other pets.

Things to Know When Owning an American French Bulldog:

Now that you have some basic information, we’re going to go through what you should expect as an American French Bulldog owner.

When you have an American French Bulldog, you want to look for food that is high quality and that is made for active dogs. This is going to help your dog to be in good shape overall. Your dog should be fed two cups per day, total.

The typical price of food for your dog will be anywhere from $35-$45 each month. You shouldn’t start poor eating habits and you want to avoid overfeeding it since this can lead to health issues in the future.

American French Bulldogs enjoy going for walks each day and this will help them stay healthy and fit. When they are younger, they’ll love to run by your bike, and when they are older, they will prefer walking.

They need a lot of mental stimulation. Otherwise, they will become bored and look for ways to entertain themselves, meaning they could get into mischief. They’re active dogs, so they can be challenging when they are living in an apartment unless you take them out a lot.

They love being with people, so you don’t want to put them in kennels or keep them in the yard all the time. A house that has a yard that’s fenced in will work best with them, just make sure that you are out there with them.

They do best in moderate climates since extreme cold or heat can cause them distress.

Even though they are intelligent, American French Bulldogs are often demanding and stubborn. It’s necessary that you have a firm, strong hand when you are training them, and that you are consistent.

Just like any other dog, it responds when you use positive reinforcement, so it’s important to offer praise when she’s doing well. These dogs love pleasing their owners and enjoy physical challenges. When she gets a lot of exercise, she’s going to be much easier to train. Taking her to the park and other places will expose her to a lot of dogs and people and help greatly with socialization.

American French Bulldogs have dense, short coats that don’t require a lot of grooming. Even though they’re considered moderate shedders, brushing them weekly using a brush with firm bristles will help with minimizing shedding. They are clean dogs, and they only need to be bathed when they’ve rolled in something smelly or the mud.

While you are brushing your dog, it’s a good idea to check their health. Look for things like cuts, lumps, or skin conditions that a vet should know about. If you are living somewhere that’s known for ticks and fleas, you also should look for them while brushing.

Because they require minimal grooming and they’re easy to maintain, they’re a big hit with families. You also should check their eyes, teeth, ears, and nails to ensure they are healthy. Brushing their teeth early on will help you with caring for their teeth as they get older.

Although the American French Bulldog does have a few health problems, they are generally healthy.

American French Bulldogs are incredibly dedicated and loyal, and they love hanging out with humans. They will interact amazingly with kids and they make great family pets for active people.

When you provide them with a lot of exercise and activity, it will prevent troublesome behavior. They love long walks and playing at dog parks.

Pug vs French Bulldog: Which Breed is Right for You?