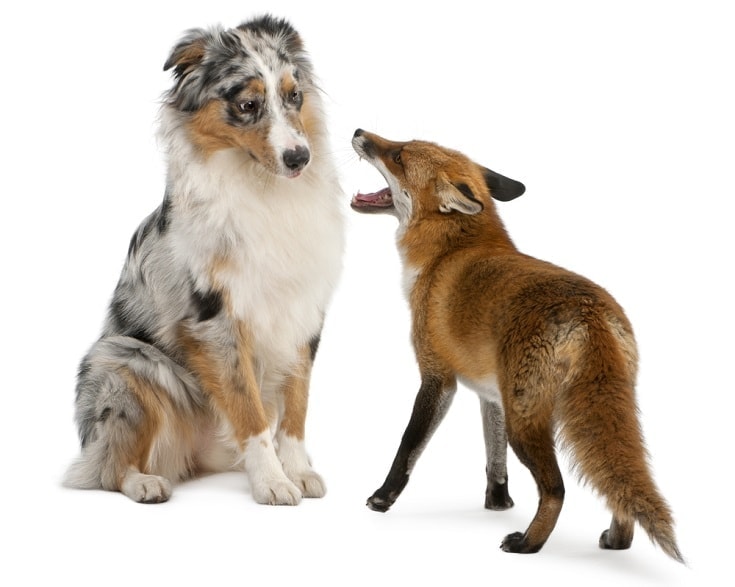 Scientists believe that the domestication of dogs occurred between 20,000–40,000 years ago. New research has found that there were likely five different lines by 11,000 years ago, with a now-extinct gray wolf being the common ancestor. The question of where foxes fit into the picture begins with a look at its scientific classification. Dogs and foxes are related down to the Canidae family. But are foxes dogs? Can dogs and foxes breed?

Let’s do a deep dive into what unites and separates the two species through their respective evolutionary histories.

Are Foxes Related to Dogs? Are Foxes Dogs?

The scientific classification system developed by Carl Linnaeus in the 18th century is an excellent place to start. Both dogs and foxes are organisms with a spinal cord that are mammals. They are carnivores that eat meat for nourishment. While foxes still hunt for a living, the closest most dogs get to this job is through hunting. A strong prey drive exists within both animals.

Each of these progressively finer and finer levels represents a line toward a common ancestry. It tells us that foxes and dogs were related through the Canidae Family. After that, foxes diverged into the Vulpes genus and dogs into the Canis one.

You have to look for more precise differences in the morphology or body structure and the biology of various species to group like ones together at this level. Vulpes differ from wolves and other canines because they are smaller in size. Their skull shape is distinctly flatter. That can, in turn, affect the brain and its manifestations in behavior, biology, and other lifestyle factors.

These differences also better equip the fox for hunting its prey. This animal will pounce to capture a fleeing animal. The fox’s morphology also opens up its diet to include plants and invertebrates. That is a significant deviation from wolves, which are primarily meat-eaters. Interestingly, that debate continues with dogs, with some experts concluding that they are carnivores, too, instead of omnivores.

That seemingly small detail is a major factor in the difference between dogs and foxes. It means significant modifications in the digestive and endocrine systems. It also provides evidence that the relationship between the two canines is more distant than we may think. Therefore, the question about the relatedness of these species is a relative one.

However, it’s worth noting that other members of the Canis genus, such as coyotes, will consume vegetation. This characteristic of itself is not a defining one. We’ll have to delve deeper to determine how foxes and dogs differ.

All the species within the genus Canis share 78 chromosomes. That is a valid point because it means that hybrids between the different animals are possible. Contrast that with the red fox, which has only 38 like chromosomes. These figures represent another piece of the puzzle of how closely related dogs and foxes are.

Scientists estimate that dogs and wolves parted ways about 3–4 million years ago. On the other hand, foxes diverged 7–10 million years ago. Unlike wolves, foxes cannot mate successfully with dogs because the differences between the two species are too great. Behavior is another significant factor that often prevents breeding.

There are several physical differences between foxes and dogs. The latter often has longer legs than the former, except, of course, breeds like Dachshunds. That trait is the result of a genetic mutation. Their teeth also vary with canines and carnassials that are specialized for tearing into flesh, which defines carnivores.

Another significant difference between dogs and foxes is their lifespan. There are several caveats that we must address upfront. Of course, most pups live a pampered life as a pet and don’t have to hunt for a living. Size is another factor that gives dogs an edge. Curiously, larger breeds typically don’t live as long as smaller ones, which flies in the face of this trait.

Foxes usually live only 2–4 years, unlike the long lives that breeds like the Chihuahua enjoy. Part of that disparity comes from living in the wild and dealing with the elements. There is also competition for habitat, prey, and mates. It’s safe to say that the life of a fox is a tough one.

The other noticeable characteristic is the personality of foxes and dogs. It strikes us as unusual for a dog not to be friendly and eager to greet strangers. That’s what makes the behavior of breeds like the Chow Chow so different from other affectionate pups, such as Labrador Retrievers. Foxes are reserved with humans for a good reason. People never hunted dogs. Foxes don’t have that same luxury.

You’ve probably have remarked about some pups that resemble foxes if just because of their pointy ears and snout. With 339 breeds recognized by the international organization, the Fédération Cynologique Internationale (FCI), there are bound to be a few that have retained those like fox chromosomes. We rounded up 15 breeds that remind us of a fox if just because of their behavior.

The American Eskimo Dog is a breed of contrasts. His homeland is Germany, not America. Their name would imply that they’re working animals. That’s true to some extent, but they came into their own with entertaining people, particularly with the circus. This pup is intelligent and retains many of the physical and behavioral traits of foxes.

The defining characteristic of the Basenji is that he isn’t vocal. That is something he shares in common with the fox that needs to stay quiet to sneak up on his prey. Stealth is his primary advantage in the field. This breed has the poise and intelligence to succeed as a hunter. He is a scent hound with a keen sense of smell that he may get from his ancestry.

The Volpino Italiano is a handsome dog, descended from an ancient breed of the European Spitz. That accounts for his resemblance to the fox. He has the prerequisite pointy ears and muzzle. This pup lived both with commoners and royalty. As his stature may suggest, his primary role was as a guard dog. However, although he is reserved, viciousness is a fault, according to the United Kennel Club (UKC).

The Pomeranian looks like a baby fox, especially in a puppy cut. His color is almost spot on, too. This guy is also related to the Spitz, being the smallest of this type. But don’t tell him that. This feisty pup thinks he can hang with the big dogs, which is a sharp departure from the fox’s shy nature. This pooch has many famous fans, including Mozart and Queen Victoria.

The Finnish Spitz has the distinction of being about the same size and color as the red fox. This pup is known for his vocal nature, something that fanciers celebrate, even with contests. This guy is an active dog that needs plenty of exercise to stay healthy. He is a sweet pooch that is both intelligent and affectionate. It’s a contrast to the fox’s shyness.

The Akita is about four times the size of a fox by weight but has his distinctive facial features. He is a muscular dog, something that is apparent, even in puppies. This Spitz-like pup was once a pet of the nobility only. He has a fearless nature about him. It makes sense, given his early roles as a big game hunter of wild boar and bears.

You can’t help but notice the confidence of the Canaan Dog. He is a canine of the desert and a survivor of these harsh conditions. His exact history is lost to time, but archaeological evidence suggests this breed goes back thousands of years to Biblical times. He is an intelligent pup, suitable for a variety of jobs from his early role as a herding dog and guardian of livestock.

The Schipperke proves that big things can come in small packages. This lively pup was more at home at sea instead of the plains as a rodent hunter. He is close in size to the fox, but his color is typically black and not the bright red of the latter. His resemblance ends at his face with his pointy nose. He lacks the bushy tail but still has the confidence you see in many smaller dogs.

The Keeshond is a lovable dog that always seems to wear a smile. Slightly larger than a fox, this pup also worked on barges like the Schipperke. His thick double coat kept him warm while living on the water. As you may guess, he probably got his start in the colder regions of the Arctic. This pooch also has a political side to him as the one-time mascot of the Dutch Patriots Party.

The face of the Pembroke Welsh Corgi tells you everything you need to know about the popularity of this pint-sized pooch. But don’t let his short height fool you. This pup once herded sheep and cattle with energy and fearlessness that made him a winner at the task. While he doesn’t have the bushy tail of the fox, he looks like him with his seemingly oversized ears.

If the Shiba Inu’s tail were a bit longer, you might mistake him for a fox. He’s about the same weight and height. He also shares many of the personality traits, originally being a hunting dog in his native Japan. While he’s relatively new to the American Kennel Club (AKC), his history stretches back hundreds of years as one of the country’s oldest breeds.

The facial features of the Samoyed are the one thing that may lead you to believe he looks like a fox. This pup is always white. He got his start as an all-around working dog, taking on tasking from pulling to hunting. Despite the color of his fur, this pooch stays remarkably clean. He is very cold tolerant with his thick double coat.

The Papillon has the narrower face and snout of a fox at a fraction of his size. He started life as a companion dog, unlike many of the other breeds we discussed. His friendly and affectionate nature sealed the deal for this pup. His large butterfly-like ears and smile endeared him to many people, including some famous ones, such as Marie Antoinette.

The Chihuahua has a flatter face than the fox, but he has the ears to fit the bill. Although he’s a small dog, he has plenty of spunk and energy to make up for it. His history in Mexico goes back thousands of years. Today, this pup serves as a companion animal as a member of AKC’s Toy Group. Even though he wasn’t a hunter, this pooch has the feistiness to do the job if asked.

Final Thoughts About Foxes and Dogs

While their common ancestry goes back millions of years, foxes and dogs share some common traits that prove they are indeed related. The fox kept his shy nature and didn’t follow the path to domestication that the dog did. Instead, this canine became sociable and loyal. It wasn’t long before humans and dogs connected. It’s been a mutually beneficial relationship since.

Dog’s Teeth Chattering: Here’s What It Means and What to Do