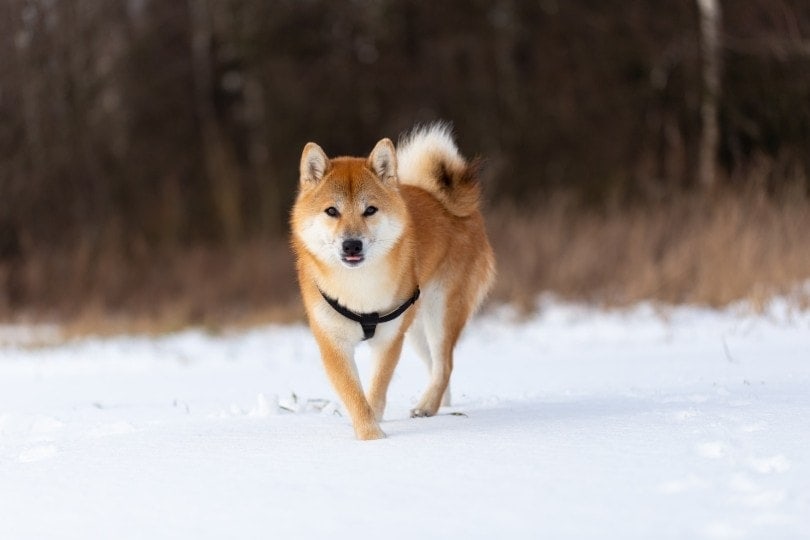 While it’s true that domesticated foxes are gaining popularity around the world, the species is far from taking the place of the beloved canine. So, instead of welcoming a wild animal into your home, why not adopt one of these dog breeds that look like foxes?

The Finnish Spitz is one of the least common dog breeds recognized by the American Kennel Club, but they’re remarkably cute. This hunting dog is native to Finland, as the name implies, and boasts a distinctly fox-like red coat. Their faces are also incredibly reminiscent of a fox.

Finnish Spitz are famous for their alert barking, with many owners enrolling their dogs in barking contests! Still, they are surprisingly friendly around strangers and are incredibly intelligent. The breed is also quite smart and independent, though, so it can be a challenge to train.

The Shiba Inu is quite popular, gaining notoriety from its use in internet memes. These dogs are bred as hunters but have since transitioned into a comfortable role as companion dogs. Their golden-red coat and pointed face make them look very similar to a fox.

Shiba Inu are surprisingly athletic and strong for their small size and are also quite aloof and independent. If you let your Shiba Inu off-leash, you can expect to lose them in a matter of seconds! Doors, gates, and other escape opportunities should be watched carefully.

The Chihuahua might not be the first breed you think of when it comes to fox look-alikes, but you have to admit the long-haired Chihuahua is a strong contender.

These toy-sized dogs are known for being stubborn and full of attitude but can make great companions when given proper training and socialization. While their tiny size means they’re far from intimidating, a Chihuahua will still try to guard its territory whenever possible.

The Pomeranian certainly has a lot more fur than your average fox, but their faces are incredibly similar. This breed, serving as companions to royalty for centuries, is at home in your lap or playing in the yard.

Regular, consistent training is a must for any Pomeranian. While the breed isn’t purposely stubborn, it can take quite a bit of repetition to get a command to stick. The breed can also be stand-offish with strangers.

The Volpino Italiano might be a little-known dog breed, but it’s a spitting image of the charming Arctic Fox. Actually, their name translates to “Italian Fox.”

These dogs, which have been popular in Italy since the 15th Century, are a type of Nordic Spitz. The Volpino Italiano might be gorgeous, but they’re also avid barkers. If you prefer a quiet household, then this probably isn’t the breed for you.

The American Eskimo Dog is another Arctic Fox imposter, though not as impressive as the Volpino Italiano. Like the previous breed, these dogs are a type of Spitz, which gives them their pointed face and ears.

This breed is incredibly friendly and trainable, largely because of their history as performing circus dogs. However, make sure you can meet their rather high exercise needs.

Often mistaken for miniature Huskies, the Alaskan Klee Kai is an energetic breed that’s quickly gaining in popularity. Many owners are choosing them over popular designer crosses like the Pomsky.

While the Klee Kai is a well-rounded family pet, they need regular mental and physical stimulation to succeed in any household.

The Jindo is a Korean breed that resembles a cross between a fox and a wolf. These dogs are excellent at guarding, hunting, and being general companions, though they’re far more independent than other popular breeds.

While the Jindo isn’t very popular in the United States, it’s revered in its home of South Korea. When kept as pets, the Jindo much prefers bonding to a single person over an entire family.

After looking at the German Spitz adorable, fox-like face, it shouldn’t come as a surprise that it’s related to several other breeds on our list. While the German Spitz comes in a range of colors, the red-coated variety is most reminiscent of a traditional fox.

This dog is incredibly easy to train and loves its family, though they don’t enjoy the company of strangers. The breed is also known for barking, so training is needed to prevent excessive noise.

Averaging 100 pounds, the Akita is far larger than any true fox. Still, their charming, slightly pointed faces earn them a spot on our list.

The Akita comes from Japan, where the breed is known for being remarkably courageous and loyal. These dogs are quite protective of their families and are valued as companions around the world.

The wild fox might be distantly related to our canine companions, but the two still share many similarities. For most households, owning a fox is far from a reality, but there are numerous dog breeds that resemble the charming, mischievous creatures!

Do you own any of the breeds we mentioned? Do you think they resemble wild foxes? Or, is there a worthy breed you think we overlooked? Let us know in the comments!

Doberman vs. Pitbull: What are the Differences?