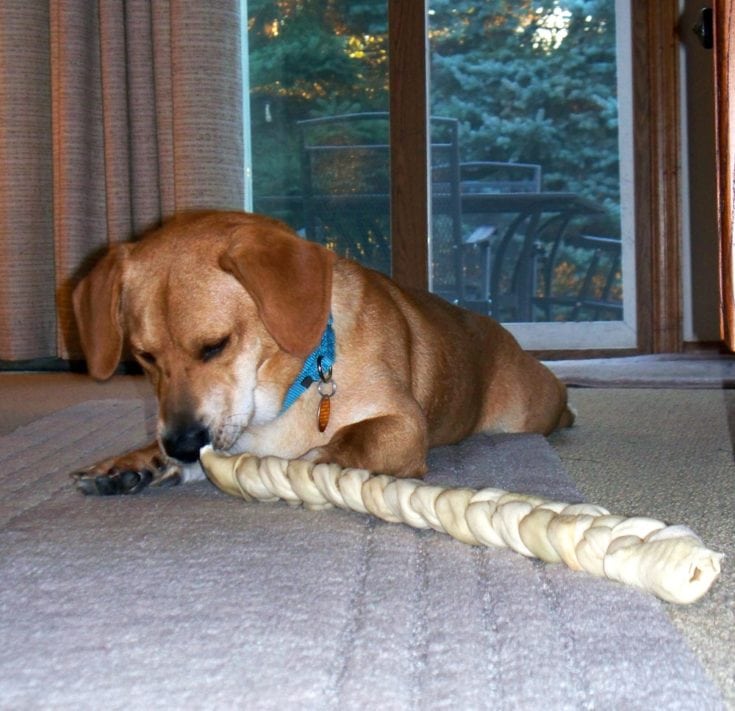 As the progeny of two hunting breeds — the Basset Hound and the Labrador Retriever — you may expect the Bassador to be equally inclined towards hunting. While this may be true to some degree, the noble Bassador is in fact more inclined towards snuggling and close companionship than long days on the hunting trail!

Strongly resembling a Labrador in almost every regard, this breed’s low-to-the-ground heritage is on display in the stumpy legs and soulful eyes of its Basset Hound ancestors. Their agreeable temperaments and signature looks have made them a popular designer dog over the last two decades.

Whether you’re considering bringing a Bassador into your home, or just want to know more about this curious hybrid breed, this article will introduce you to everything you need to know. From the price of Bassador puppies to their temperament, trainability, and health requirements, let’s take a look at everything this fascinating breed has to offer.

Bassador Puppies – Before You Welcome One Into Your Family…

Any “designer” dog breed — a mixing of two purebred dogs — will carry the temperaments and characteristics of its parent breeds. Therefore, let’s consider the individual merits of the Basset Hound and the Labrador Retriever before discussing how these two breeds naturally balance each other out in the Bassador.

Labrador Retrievers hail from Canada and were originally companion dogs and work assistants to fishermen in northern Canada, around the Labrador Peninsula. An incredibly popular breed, they rank as the number one breed in many countries. You can find them at work as disability assistance dogs, therapy dogs, and law enforcement screening and detection dogs.

With a name from French that roughly translates to “rather low,” the Basset Hound is an oddly shaped dog breed that’s instantly recognizable for its short legs and long, droopy ears. Originally bred to trace the scent of rabbits while hunting, these short-legged canines may have a genetic history that traces as far back as 2,000 BC, in the Middle Kingdom of Egypt. They are a friendly, outgoing, and notoriously vocal breed that can trend towards serious stubbornness.

Perhaps the greatest benefit of the Bassador’s crossed genetics can be seen in its developing resistance to chronic health problems that plague Basset Hounds and Labrador Retrievers. Something about the genetic mixing of these two breeds has led to a beneficial arrangement of health characteristics, often making them longer-lived than either of their parent breeds.

Owing to their heritage from two hunting dog breeds, the usually laid-back Bassador can be prone to bouts of intense chasing and hunting when smaller prey animals are around. Unless you’ve given them appropriate training, they will often aggressively pursue squirrels, rabbits, cats, and other small animals as soon as they spot one.

2. They Display a Trait Known as “Alarm Barking”

A combination of traits from both sides of their ancestry, the Bassador will employ a Basset Hound’s trademark howl alongside the Labrador Retriever’s high-alert barking. This both makes them excellent guard dogs, as well as a possible nuisance in the middle of the night if a raccoon is digging in your trashcan. When a Bassador has been spooked, they’ll definitely let you know it!

3. You May Be Able to Find One in a Shelter or Rescue

Unlike most designer dog breeds, Bassadors are a relatively common occurrence due to the large presence of both purebred Labradors and Basset Hounds in America. Though they’re not so common as to be found everywhere, there’s a better than average chance that you’ll be able to find one up for adoption if you put patient effort into searching and waiting.

Temperament & Intelligence of the Bassador 🧠

It can be difficult to make broad judgments on an individual Bassador’s temperament, as the breed has a tendency to be dominated by the characteristics of only one side of its genetics. If your Bassador favors its Labrador heritage, they will tend to be more energetic and friendly — while favoring its Basset Hound heritage will lead to a dog that’s more curious and inquisitive. Either way, they are most likely to be friendly and outgoing with just about everyone.

Spending time with families is one of the areas where the Bassador truly shines. Their outgoing personalities and love of pets and affection make them ideally suited to any family that can give them plenty of attention. Add to that a devoted nature that loves helping and the added exercise from playing with kids, and you have a dog that’s an ideal candidate for inclusion in your home.

Due to their unnaturally high prey drive inherited from a combination of hunting breed parents, Bassadors are not a good choice for homes with small pets. While they can be trained to avoid chasing small animals, this is a lengthy process that is not always perfectly effective. Around other dogs, however, Bassadors are affable and happily share their homes.

Things to Know When Owning a Bassador:

Oftentimes, owning any Labrador mixed breed can feel like taking care of a puppy for the first three years of their life. If you’re considering bringing a Bassador into your family, we strongly recommend that you consider the cost of time, money, and attention involved in doing so — as well as the following topics related to their health:

Medium in size but high in energy requirements, Bassadors do not require any special dietary considerations outside of an average dog breed. You should be careful not to overfeed them, however, as they have a genetic predisposition to gain weight quickly. If in doubt about the best food for your dog’s breed and stage of life, it’s always best to consult with a licensed veterinarian.

Bassadors require significant exercise to help them prevent weight gain or full-on obesity. Their hunting genes incline them towards vigorous activity, such as a high-speed game of fetch or an intense tug of war battle. Anywhere from 30 to 60 minutes a day of moderate to vigorous activity is usually enough to help them stay at a healthy weight.

This breed is especially prone to two undesirable behaviors: chewing and chasing prey animals. Both will require substantial amounts of training to overcome. This can be a challenge, due to the Bassador inheriting a Basset Hound’s natural stubbornness — but it is definitely possible, owing to the excellent trainability of its Labrador side.

A post shared by Lionel The Bassador Of Del Ray (@trulylionel)

Equipped with a short but exceptionally dense coat, the Labrador is a breed with a high degree of shedding. Weekly brushings should suffice for much of the year, but during your dog’s shedding seasons in the spring and fall you should be prepared to increase this to once daily.

General health and well-being can vary widely from one Bassador to the next, and much of their potential for health is dependent upon responsible breeders. Always go to extra lengths to verify any Bassador breeder’s credentials and inquire as to the health of the dog’s parents before committing to a purchase.

Common ailments for Bassadors include:

Generally, male and female Bassadors display little meaningful variation. Males may be slightly heavier due to increased muscle mass, while females display more of a tendency to put on weight in old age. Both sexes display similar temperaments, making them excellent pets.

Displaying the best of two mega-popular breeds, the Bassador makes an excellent pet in any home that doesn’t already have small animals as pets. They’re a popular designer dog breed for good reason: an agreeable nature and generally good health make them quite easy to care for.

6 Types of Retriever Dog Breeds: An Overview (with Pictures)