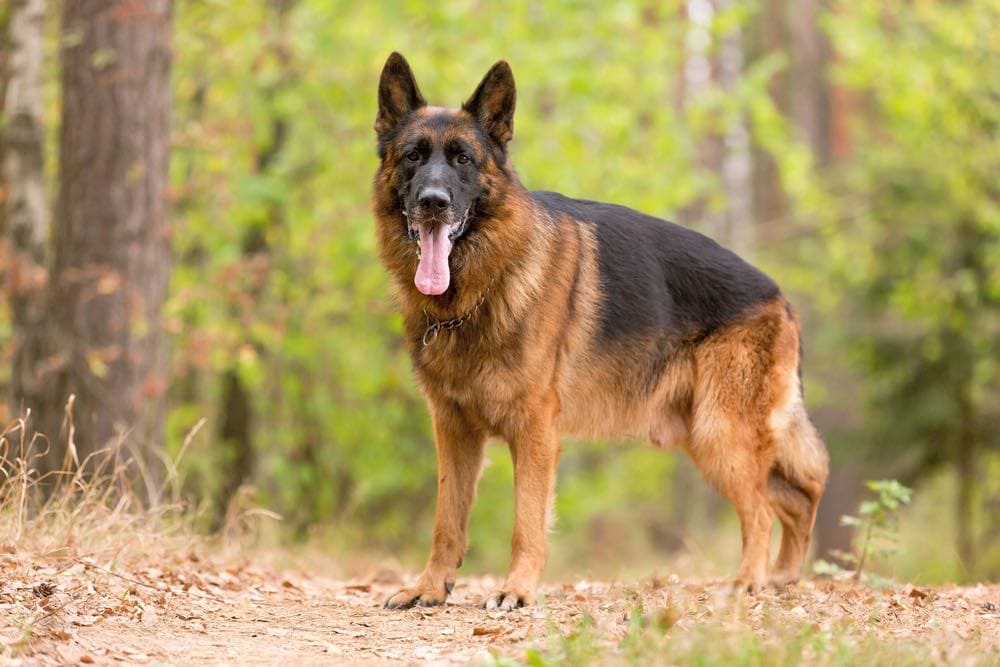 Ask any police officer, and they’ll almost certainly tell you that one of the most effective ways to protect your home from criminals is to own a dog. It sounds simple, yet the humble family dog has almost certainly deterred more crime in most suburban and inner-city neighborhoods than any other form of security system.

This isn’t necessarily because criminals are afraid of dogs, but rather because having a dog in your home makes breaking into your house a riskier proposition than breaking into one up the road where there is no dog.

Of course, some dog breeds are more of a threat than others. While almost all dogs will bark at an intruder, some will also bravely defend your property by physically attacking or chasing away anybody who tries to enter uninvited.

So, the question is, what are the best guard dog breeds?

The Akita is a large, powerful, and independent breed that comes from the mountainous regions of northern Japan. Originally bred for dog fighting and hunting, the breed is known to be extremely territorial and wary of strangers, and unless trained and socialized while young, they are likely to be aggressive toward other dogs and strangers.

The breed has a long history as a guard dog and was for many years used to guard royal and noble households in feudal Japan. The Akita is an extremely loyal breed that thrives on human companionship. They are exceptionally confident dogs and brave to a fault and never back down from anything or anyone that they perceive to be a threat to their family.

The Belgian Malinois is one of three varieties of Belgian Shepherd. Strong and robust, they are extremely popular military and police working dogs that currently serve with the United States military and with many police agencies around the country.

The Belgian Malinois is a highly energetic breed that thrives on human company. They are smart and obedient dogs with strong natural protective instincts and require early training and socialization to avoid problems with aggression toward other dogs and strangers. The breed responds well to training, and they make for highly competent guard dogs.

The Bouvier des Flandres is a large dog that was originally developed in Belgium as a general farm and herding dog. Over the years, they have served with distinction as military and police dogs in their native land, and they also have a long history of working as guard dogs.

The Bouvier des Flandres is an affectionate and courageous breed that responds well to training. They are known to be a bit strong-willed, and they will do best with an experienced dog owner who can provide the leadership that they need, as well as the time needed to train them appropriately.

The Bullmastiff is a large and muscular dog that has a long history of working as a guard dog and was originally developed in the 19th century by gamekeepers in England to guard their estates against poachers and thieves. At the time, their role involved tackling and pinning any poacher that illegally entered their master’s land.

Today, it is the Bullmastiff’s ability to jump onto any person and pin them to the ground that has led to them being considered by many to be a dangerous breed. To become well-behaved family pets, Bullmastiffs require early socialization and ongoing obedience training. However, no specific guarding training is required, as they will instinctively leap to action and fiercely protect their family in the event of any perceived threat.

The Cane Corso is an Italian breed of Mastiff that is often used in their native land for personal protection, guarding, tracking, and law enforcement work. They are large and powerful dogs that are quite intelligent, and despite their reputation for having a mind of their own, they are easily trained.

While wary of strangers, the Cane Corso is an even-tempered dog that is usually quite affectionate toward their family members. Though not recommended for families with small children, the breed is much loved in Italy, where they have a favorable reputation among many of the country’s youth, who see the breed as a symbol of strength.

The Central Asian Shepherd Dog is an extremely old breed that is thought to have developed naturally over 4,000 years ago in the area between the Ural River, the Caspian Sea, and the northwest border of China. For centuries, these dogs served as livestock guardians, guard dogs, and personal protection dogs and to this day, are used for guarding livestock.

The breed is known to be extremely wary of strangers, and throughout the breed’s history, this is a trait that was encouraged. For centuries, these dogs served as livestock guardians, guard dogs, and personal protection dogs, and to this day, they are still used for guarding livestock.

The Doberman Pinscher was originally developed as a personal protection dog in Germany, and over the years, has been employed extensively as both a military working dog and police dog. The breed is highly intelligent and often used as a guard dog.

Dobermans Pinschers are also a popular family pet and are known for their loving and loyal temperament. These dogs genuinely enjoy spending time with their family and will also usually be quite accepting of other pets.

The Dutch Shepherd was originally bred in the Netherlands as an all-purpose farm dog but quickly earned a reputation as a brave and loyal shepherd dog. The breed has much in common with their cousins, the Belgian and German Shepherds; however, they are generally considered easier to train.

The breed suffered greatly during World War II and during the post-war years, almost became extinct. However, due to a renewed breeding program in the late 1950s and a renewed interest in the breed, the Dutch Shepherd was able to be saved.

Today they are still less popular than other Shepherd breeds. However, their natural guarding instincts, intelligence, and courage make them capable guard dogs.

The German Shepherd is one of the most popular working dog breeds of all time and has been used by policing and military organizations around the world for decades.

German Shepherds are a physically imposing dog that can call upon a significant amount of aggression when the need arises. Intelligent, loyal, and brave dogs, German Shepherds are loving companions and family pets in thousands of households across the country.

The Great Pyrenees is a large, protective, and brave dog that was originally bred to guard livestock against coyotes and wolves. Highly intelligent and independent, they often worked alone and needed to figure out problems for themselves.

While these traits were great for guarding livestock, today, the Great Pyrenees is far more likely to be found living in a suburban backyard as a family pet. In this environment, their independent and overprotective nature can sometimes cause problems. But if a large protective and free-thinking dog is what you are after, you really can’t pass up a Great Pyrenees.

The Moscow Watchdog is a hybrid breed that is the result of crossing a Caucasian Shepherd and a St. Bernard. A large and powerful breed, the Moscow Watchdog was developed in the former USSR in the years immediately following World War II to help the Communist government fight rising crime levels and to protect government institutions, warehouses, and infrastructure from vandalism and looting.

For many years, the Moscow Watchdog was virtually unknown outside the Iron Curtain. However, following the fall of the USSR, the popularity of the breed has spread. It is now commonly found throughout much of Europe and in recent years, has also grown in popularity in the United States.

Moscow Watchdogs have a natural protective instinct that makes them highly effective guard dogs. They are also known as wonderful family pets, and around their families, these dogs have a wonderful temperament and act like gentle giants.

The Rottweiler is a popular family pet and guard dog that was originally developed to herd cattle. However, due to their natural protective instinct and imposing physical presence, they were quickly drafted into service as both police and military working dogs. Over the years, the breed has developed an excellent reputation as a guard and personal protection dog across the United States and throughout Europe.

Harrier vs Beagle: Which Dog to Choose?