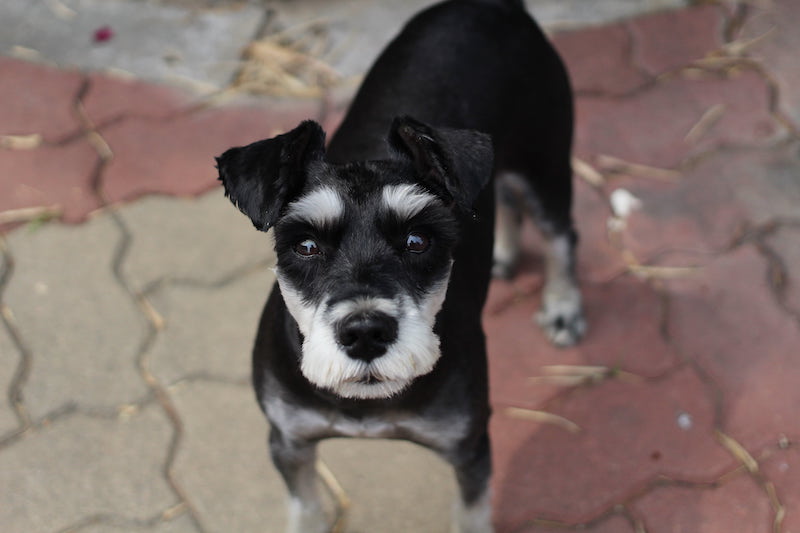 The Bulldog Schnauzer is a hybrid breed that mixes the English Bulldog with the Miniature Schnauzer. The two parent breeds are quite different, which means that you can enjoy any of a host of attributes and qualities in your designer dog.

The bulldog is quite a lazy, laid-back dog. They are stocky and muscular and have squished faces, which can lead to breathing difficulties. This is one of the reasons that the Bulldog may have been crossed in the first place – to breed out the brachycephalic facial tendencies.

In contrast, the Miniature Schnauzer is lively, active, and usually wants to be doing something. He may be a little mischievous, which means that owners will have to provide a good amount of mental stimulation, as well as physical, to help prevent destructive behavior.

Although you cannot be sure whether you will get a dog that tends towards the personalities and characteristics of the Bulldog or the Schnauzer, your hybrid will likely be active when out and about, but more reserved when at home. In either case, he should be good with children and will usually get along with other animals and pets, especially if he has been socialized from a young age.

Bulldog Schnauzer Puppies – Before You Get One

1. Bulldogs Were Bred to Fight Bulls

The name is something of a giveaway, but Bulldogs were initially bred to fight bulls. They were bred short so that they could stick to the ground and attempt to get under the bull’s horns. From here, they would bite the bull’s nose. Once they had hold, they would attempt to keep hold, and their short stature gave them a low center of gravity so that they were less likely to become injured when thrown off. Even their wrinkles served a purpose – they formed channels on their face that allowed blood to run down, keeping it away from their eyes. The shorter snout allowed them to breathe more easily while they had hold of the bull, although this facial feature has been the cause of breathing difficulties for the Bulldog. Thankfully, the awful “sport” of bullfighting was banned in the early 19th century. Bulldogs have been bred for their companionship ever since.

Once bullfighting was outlawed, the Bulldog lost favor with most breeders. The Bulldog breed faced extinction as a result. Fortunately, some examples of the breed were transported to the USA and some to Germany, where they found favor as herding dogs. They had been bred to deal with bulls, after all, and this meant that they were capable of herding them. In England, they retained a small following of owners that appreciated their companion qualities. Thankfully, they had their aggressive traits bred out of them, and they were bred to have a kinder demeanor so that they became popular as a family pet.

Miniature Schnauzers are considered one of the most intelligent breeds. They rank highest of the three Schnauzer breeds, in fact, and are widely considered one of the most intelligent non-working breeds. They are also considered obedient dogs, and this combination of obedience and intelligence makes them ideal for training. They can pick up new commands in around 10 repetitions, which means that they will easily master basic commands, and can be taught some impressive tricks and habits in a relatively short time. This intelligence is why the breed was used for ratting and for herding smaller animals on farms. Today, they are more likely to be found in front of the fire or on their owner’s lap than in the field, but they have retained their intelligence.

Temperament & Intelligence of the Bulldog Schnauzer 🧠

However, most owners report that this breed is friendly, will get along with all family members, and is both respectful and gentle with children and other animals. They will also tend towards the intelligence of his Schnauzer ancestry, which means that your Bulldog Schnauzer should be easy to train. Although you should probably expect them to be a little headstrong and maybe more than a little lazy, so short bursts of intensive training will work better than hour-long sessions.

The Bulldog Schnauzer is considered an excellent family dog. They are loving and loyal. Depending on whether the Bulldog or the Schnauzer breed is dominant, they may enjoy sitting by your feet, or they may prefer to have some space to themselves.

Although he may be stocky and muscular, the Bulldog side of this breed means that he is not as prone to energetic charging around the house. He will also have a seemingly instinctive appreciation of a child’s need for space and time, and he will allow stroking, patting, and some gentle tugging. Time spent between any dog and small children should always be monitored, however.

Neither parent breed gets along very well with dogs outside the family, and the Schnauzer may still have some prey instinct, which means that your dog could be prone to chasing cats and will certainly want to chase anything smaller. With that said, as long as you introduce them carefully, slowly, and patiently, there is no reason that he will not get along with other dogs in the household.

A post shared by Not So Little Miss Chubellina (@bellathechubchub)

Things to Know When Owning a Bulldog Schnauzer

The Bulldog Schnauzer can make a great family pet. The Schnauzer in him means that the Bulldog is less prone to breathing difficulties, but there are some health complaints that you will still need to watch out for. Read on for more details on owning one of these unique hybrid breeds.

The Bulldog is prone to putting on lots of weight. This is because he loves to eat and he leads a sedentary lifestyle. Although your hybrid is likely to be more active, he may still have the propensity to gorge on food. Expect to feed around 1.5 cups of decent quality kibble every day, and remember that if you use treats as a means of training, you should take this into account when calculating his dietary requirements.

The Schnauzer is an active dog, while the Bulldog is not. You will likely have a dog that falls somewhere between these two extremes. Expect to provide at least one decent walk a day, lasting at least 30 minutes. If the Schnauzer is the dominant breed, then your puppy will enjoy obedience training and high activity classes. If the Bulldog is dominant, he will prefer to lay at your feet.

Although the hybrid might be quite small compared to some other breeds, he still needs to know that you are the pack leader and that what you say goes. You should never use physical reprimands when training a dog, and positive reinforcement works better than negative. The Schnauzer will want to please you and is one of the most intelligent breeds, but the Bulldog is likely to be lazy and a little headstrong. Opt for shorter and more intense training periods, rather than hours of trying to train the same commands, and you will have a greater chance of success.

Socialization is important for all breeds, but especially for this cross. The Bulldog can be shy around strangers, but socialization teaches them that new people and new situations are not necessarily to be feared. This socialization can be provided through puppy classes and also through regular walks in busy parks and areas.

Both parent breeds are moderate shedders. Only bathe your dog when necessary, to avoid stripping them of their natural, protective oils, and be prepared to give your dog a weekly brush to get rid of dead hair.

If your dog has the wrinkles of the Bulldog, these will need some attention. Dirt and bacteria can build up in the folds of the skin, and this can lead to infection. Inspect their folds and use a damp cloth to remove dirt, ensuring that you dry them with a dry cloth afterward.

All dogs need help with dental hygiene. Start when he is a puppy and clean your dog’s teeth three times a week. Starting when they are young means that they will be more accepting of the activity, which can be upsetting to an adult dog.

You should also start clipping their nails when they are young. One telltale sign that it is time to give them a trim is when you can hear them clipping on hard floors like wood or laminate. Dogs usually need their claws clipping every month or two, more often if they only walk on soft surfaces, and less often if they walk on abrasive concrete.

The Bulldog is notorious for having breathing difficulties, due to his brachycephalic face. Although this may be less likely in a hybrid, there is still a risk. This is just one possible area for concern. Look for signs and symptoms of the following conditions and seek veterinarian treatment if your dog does display any of them.

Although the male of the breed is likely to grow a little larger than the female, the difference isn’t huge. Both genders are considered the same in terms of characteristics and traits.

By mixing the English Bulldog with the Miniature Schnauzer, breeders have created a hybrid that crosses two very different breeds. They look different and have different characteristics, as well as different health problems you need to keep an eye out for. With that said, the Bulldog Schnauzer is known to be a friendly, loyal, and loving dog, but he can fall on the side of laziness and be headstrong and stubborn.

Socialize your hybrid early, ensure that you start training when he is young, and do not overfeed this breed, otherwise you could end up with a grumpy, anti-social, obese dog with a heart condition.

Your puppy will likely get along with all family members, including both canine and human, and he will make a good guard dog, an excellent companion, and a loving family pet.