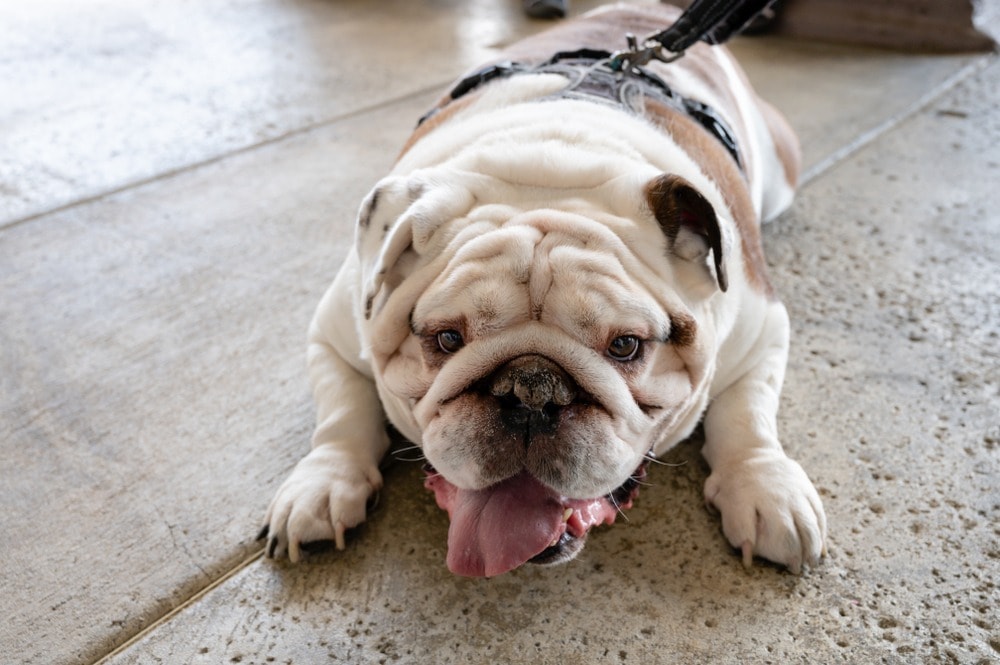 The English Bulldog is one of the most popular dog breeds in the world, and it’s not hard to see why: They’re unbelievably adorable.

However, these pups are also prone to a wide variety of health problems due to inbreeding, and many people feel that it’s inhumane to continue making purebred versions of the dog.

That’s why English Bulldog mixed breeds are becoming increasingly common. Breeding these pooches with other types of dogs minimizes the health problems that the mutt will encounter, without sacrificing their most important trait: their absolute cuteness.

In the list below, we’ll give a brief overview of popular Bulldog mix puppies around today.

The Beabull is a mix between an English Bulldog and a Beagle, and these medium-sized dogs are absolutely irresistible. They are as affectionate as Bulldogs and as fun-loving as Beagles, making them the perfect family pet.

They typically weigh between 30 and 50 pounds, and they adore all life forms, including other pets. The biggest issue that you’ll likely with a Beabull is giving them all the love and cuddles that they deserve.

The Bull Jack is an unusual breed — and certainly looks the part. This dog is a mix between an English Bulldog and Jack Russell Terrier, so it usually only weighs 30 pounds at most.

They tend to take after Jack Russells in terms of energy levels, so don’t be surprised if this pup has you running all over the place in an effort to tucker it out. Of course, it’ll all be worth it when they curl up in your lap afterward.

As you might expect, the Englishweiler is what happens when you toss a little Rottweiler DNA into the mix. These are big dogs, weighing as much as 100 pounds. They tend to look like Rotties, but with more of a smushed-in nose.

One issue with these dogs is that they’re a mix of two stubborn breeds, so don’t expect them to blindly follow every command you give them. You’ll have to earn their respect; luckily, their kisses and cuddles are free.

This is another strange concoction, achieved by mixing an English Bulldog with a Whippet. What happens when you mix a fat puppy with one that’s skinny as a rail? You get a dog that tops out at about 60 pounds but is also long and lean.

Bullwhip dogs love to run and have a stubborn streak, so be prepared to spend a great deal of time training them. Be careful bringing them into a home with smaller pets, though, because Whippets have a high prey drive.

The Mountain Bulldog is a crossbreed that works out well for the parent breeds, as the English Bulldog and Bernese Mountain Dog are both extremely prone to health problems. Mixing their genes extends their lifespan considerably, though, and these dogs often live for 12 years or more.

They are massive, though, and regularly tip the scales at 120 pounds. However, they’re huge people-pleasers, so you won’t have to worry about having to earn their respect.

The English BullCorgi is a lowrider mix that’s a ton of fun to watch waddle around. They can weigh up to 50 pounds and are not big fans of exercise, so be careful not to let their waistline expand too much.

These dogs are usually fairly healthy, but they are prone to back problems, which makes it all the more important that you keep their weight in check. They’re big-time cuddlers, so expect to have a friend in your lap for your next Netflix marathon.

Both of the Bulloxer’s parent breeds are so brachycephalic that it’s a wonder these dogs have a nose at all. That said, these dogs are surprisingly energetic, so you may need a big backyard in order to own one.

They can weigh as much as 90 pounds, so when they get the zoomies, your entire house can be vulnerable. You’ll want to teach any young children to stand clear.

This English Bulldog Shepherd mix is a strange marriage, as English Bulldogs love to sleep and Australian Shepherds may not know how. The Bull-Aussie tends to take after their Shepherd heritage more, so expect to spend a great deal of time tuckering these dogs out. Fortunately, they love having jobs to do.

They’re on the larger side of medium, registering in the 50-70-pound range. They’re extremely friendly and love finding new playmates — and you’ll need all the help you can get to run their batteries down.

A mix between English Bulldogs and Labradors, Bulladors are big (over 80 pounds) and loyal. They love their families and will do anything to protect them. Still, they’re often friendly and welcoming toward strangers.

These dogs are fairly active, but many have a brachycephalic face, which can limit their ability to breathe and dissipate heat. As a result, you’ll have to be careful not to push them too hard while exercising.

To get a Bullhuahua, you have to cross English Bulldogs with Chihuahuas, and the result is a surprisingly big (40-50-pound) lap dog.

Their personalities are often friendly and welcoming, but they can have a strong territorial streak like Chihuahuas. As a result, it’s important to train and socialize them early so they know how to behave in polite company.

If you add a little Pit Bull Terrier to an English Bulldog, what do you get? The adorable English Bullpit, of course. These impressive mutts can weigh as much as 80 pounds and are usually laidback and calm (although they’ll jump at any opportunity to lick your face).

However, it’s extremely important to socialize these dogs while they’re young so you can nip any behavioral problems in the bud. After all, it’s hard to control a stubborn, 80-pound dog.

Although it seems a little odd to mix a Bulldog with a German Shepherd, the English Bull Shepherd makes a fantastic pet. Walking around at close to 90 pounds, these dogs are strong and brave and make terrific guard dogs.

They’ll also spend all day by your side, though they’ll expect a fair amount of exercise at some point. Oh, and be prepared for the shedding.

Made from a mix of English Bulldog and Akita, the Bullkita is a hulking, 90-pound beast that loves to play. Both parent breeds are heavy droolers, so we hope that you have a good mop.

Just know that Akitas can be prone to aggression, and both breeds are known for being stubborn. That means you’ll need to be confident in your training abilities, and you’re better off not having any other pets in the home.

Catahoula Bulldogs vary wildly in terms of size; some only weigh 40 pounds or so, while others tip the scales at over 100 pounds. Regardless, you should have a stocky, muscular dog on your hands.

These dogs are excellent guard dogs and competent hunters, so it’s important to socialize them early to avoid any problems with aggression. If you do that, though, you’ll have a goofy, fun-loving companion to share your home with — and you’ll rest easy knowing that they’re watching the place at night.

If you want a dog that will turn heads, this Bulldog-Mastiff mix should do the trick. They can weigh up to 130 pounds and are extremely powerful, so you’d better hope that they don’t pull on the leash or you may lose an arm.

Despite their giant stature, they’re not okay with being left alone, and they can be scaredy-cats. That shouldn’t be much of an issue, though, as no one is likely to mess with a dog this big.

If you like English Bulldogs but feel that they just don’t have enough wrinkles for you, then you’ll love Bull Peis. Made by adding Shar Peis into the mix, these dogs are just puddles of wrinkles, which is to say that they’re absolutely adorable.

These are laidback dogs, and while they enjoy a nice game of tag, they see no need for excessive amounts of exercise. As such, they’re great for apartment dwellers but may be better-suited for homes without small children.

Poodles are commonly used to make designer breeds, as they’re incredibly smart and hypoallergenic. English Bulldogs are typically neither of those things.

English Boodles aren’t hypoallergenic but they are light shedders. They often weigh around 50 pounds and are not nearly as smart as their Poodle forebears. They make up for it by being incredibly sweet, however.

A mix between English Bulldogs and Shih Tzus, Bully-Tzus are interesting-looking, to say the least. They often look like a regular Bulldog that somehow got into a box of Rogaine.

They’re fairly small (in the 20-pound range) and love to cuddle. They’re friendly and sociable, so don’t expect a great guard dog. However, they make up for their lack of security skills with a fair amount of intelligence.

Made by crossing English Bulldogs with Pugs, Miniature Bulldogs look like Pugs. They are extremely brachycephalic and are often prone to a whole host of health issues like respiratory problems, heat intolerance, and joint concerns.

They can weigh as much as 40 pounds, but you’re better off keeping them slim and trim, as being overweight exacerbates any health issues that they might encounter. That generally means cutting back on their rations, because this is one breed that does not like to work out.

If you want a pet that’s capable of guarding your stuff, look no further than the English Neo Bull. Made by crossing Bulldogs with Neapolitan Mastiffs, these huge, 100-pound monstrosities aren’t the types of dogs that anyone will want to mess with.

That’s not to say that they’re monsters, though — far from it. They’re easygoing and gentle with their families, and they’re the type of dog that will happily sit through a doggie makeover or tea party just because it makes their littlest owners happy.

If you add Golden Retriever DNA to your English Bulldog’s genetic profile, you’ll get a Golden Bulldog: a smart, patient, loyal companion that responds well to training. That’s a good thing too, because at upward of 75 pounds, these aren’t tiny animals.

These pups love their families, and they’ll do anything to please their owners. As a result, they make great service dogs, but they’re not suitable for users with respiratory issues, as they shed like crazy.

Predictably, the Bulldog-Dalmatian mixes have black-and-white spots. These medium-sized (40-50-pound) dogs are loving and sociable, but they need a ton of physical stimulation. They also have gentle spirits, so don’t expect to be quickly forgiven if you lose your temper with them.

A Mix for Everyone

If you love English Bulldogs but are put off by their propensity for health problems (not to mention how expensive purebred puppies can be), consider adopting one of the mixes on this list instead.

Every dog listed above is cute as a button and are generally healthier than a purebred English Bulldog. Plus, they still retain most of the qualities that make Bulldogs so sought after.

Even better, most of these mixes are rare enough that you can have a dog that truly stands out.