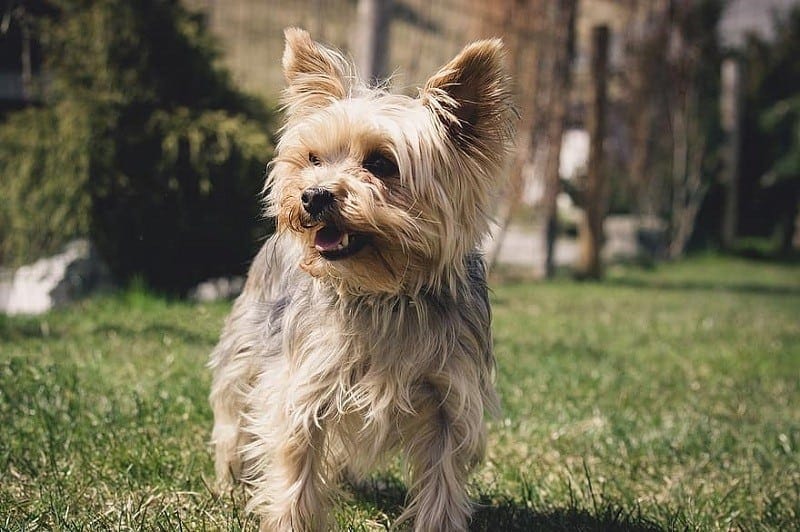 Extremely small and light, with the long wiry coat that gives the Griffon “family” its name, these lapdogs make ideal companions for anybody looking for a slightly lower-impact pooch.

However, life isn’t always a picnic with a Griffonshire. They inherit stubborn genes from both their parent breeds and take work to train and socialize. In this article, we’ll tell you everything you need to know about welcoming a Griffonshire into your life.

Griffonshire Puppies – Before You Get One…

1. The Brussels Griffon Isn’t Related to Any Other Griffon Breeds

Lots of other breeds have “Griffon” in their names, such as the Wirehaired Pointing Griffon. While they might seem like cousins, they actually aren’t — “Griffon” actually refers to a type of coat shared by all these breeds.

They were originally bred in Scotland in the 18th century, where they were used to hunt rats. After migrating to Yorkshire, they changed from hunters into companions, becoming the Yorkies we know today.

3. Griffonshires Are Not Recognized By The American Kennel Club

Griffonshires are a modern designer breed, few of which have official certification. This is a double-edged sword — on the one hand, their behaviors aren’t standardized, but on the other, a lack of breeding standards tends to make dogs healthier due to hybrid vigor.

Temperament & Intelligence of the Griffonshire 🧠

The Griffonshire’s parent breeds share several traits. Both Yorkies and Brussels Griffons are known for being energetic, headstrong, and mischievous, and for never liking to be too far from their owners.

Griffonshires inherit all those traits. It’s easy to write them off as having “small dog syndrome,” since they’re loyal, assertive, and a little hard to train. However, that’s selling these tiny champions a bit short (no pun intended). In fact, Griffonshires have almost human-level intelligence and do well in households where they’re challenged and respected.

Griffonshires suffer from separation anxiety and need a lot of quality time with their owners. It’s good to have a whole family involved in taking care of them so everybody can pitch in. However, there are a few things to beware of.

Griffonshires tend to pick a favorite person in the family and stick to them like glue. They love everyone in their pack, but only one can be their true master. That person will get more love and affection, but will also face a bit more work dealing with the Griffonshire’s moods.

We also don’t recommend bringing a Griffonshire into a house with very small children. Griffonshires can be high-strung and often become nervous to the point of biting around hyperactive kids. If your children are a little older, and you trust them to treat a dog with respect, a Griffonshire makes a wonderful companion.

Unlike some other small dogs, Griffonshires don’t need to be the leader of the pack. As long as they’re introduced to another animal as a puppy, they’ll probably get along with it, whether it’s a dog, cat, or other pet. Just make sure the other animal isn’t fond of pushing your Griffonshire’s buttons, and everything should be just fine.

Things to Know When Owning a Griffonshire:

Griffonshires are so small that they don’t burn many calories. One cup of dry food a day, spaced out over two to three meals, is enough to fulfill all of their nutritional needs. Feed your Griffonshire at regular mealtimes — don’t free-feed, or they might reach an unhealthy weight. Always make sure there’s clean water available.

Choose a food for your Griffonshire by getting a recipe formulated for their age. Puppies, adults, and senior dogs all need slightly different nutrients. The best food is high in protein and fat and uses real meat and vegetable matter as its first five ingredients.

Griffonshires seem like endless fountains of energy, but with their squat stature, they tucker out fairly fast. Plan to spend between 30 and 60 minutes outdoors with your Griffonshire every day, depending on how old they are.

They enjoy walking, catching frisbees, chasing balls, and entertaining themselves in the backyard. Playing with indoor toys can also help keep their energy levels in check.

Along with both their parents, Griffonshires have a reputation as one of the hardest breeds to train. It takes a lot of effort to housebreak them, teach them commands, and socialize them with people and pets.

That’s not to say every Griffonshire is a holy terror. They’re as cuddly as any dog, but they’re also proud. Both stubborn and smart, Griffonshires only follow commands when they decide that it suits them. This makes them respond very poorly to negative reinforcement.

The best way to train a Griffonshire is to ply it with a combination of treats, toys, and words of encouragement. This can be difficult to get right, so most owners prefer to let a qualified obedience school handle it instead.

Given that there’s no breed standard for the Griffonshire yet, it’s hard to nail down just how much work they’ll be to groom. The Brussels Griffon has rough, wiry fur, while the Yorkshire Terrier’s coat is smooth and soft. It’s a tossup which one a Griffonshire puppy will inherit.

If your Griffonshire takes more after the Yorkie parent, brush them every day with a pin brush and dematter. The more like the Brussels parent they are, the less you’ll have to brush — an especially wiry Griffonshire only needs a twice-weekly grooming session with a pin brush.

You should also clip your Griffonshire’s nails when they get too long, and swab out their ears with a cotton ball once a week to prevent itchiness and infections.

Griffonshires are a decent example of hybrid vigor, where mixing two purebreds reduces the common health problems of both. All in all, they’re healthy dogs that can be expected to live long and happy lives. Just be aware of the following potential problems so you aren’t taken by surprise.

Since Griffonshires do not currently have a standardized appearance or behavior, it’s hard to say what difference sex is likely to make. Right now, we know that male Griffonshires are marginally bigger than females, but that’s about it. The degree to which a puppy takes after each parent will make a much bigger difference.

Griffonshires may look like lapdogs, but they have a lot more going on upstairs. To stay happy, they need challenges to solve, adventures to go on, and of course, a loving human owner to snuggle.

As long as you remember to always respect your Griffonshire’s intelligence, everything else will fall into place. If you decide a Griffonshire is for you, we wish you many years of happiness!