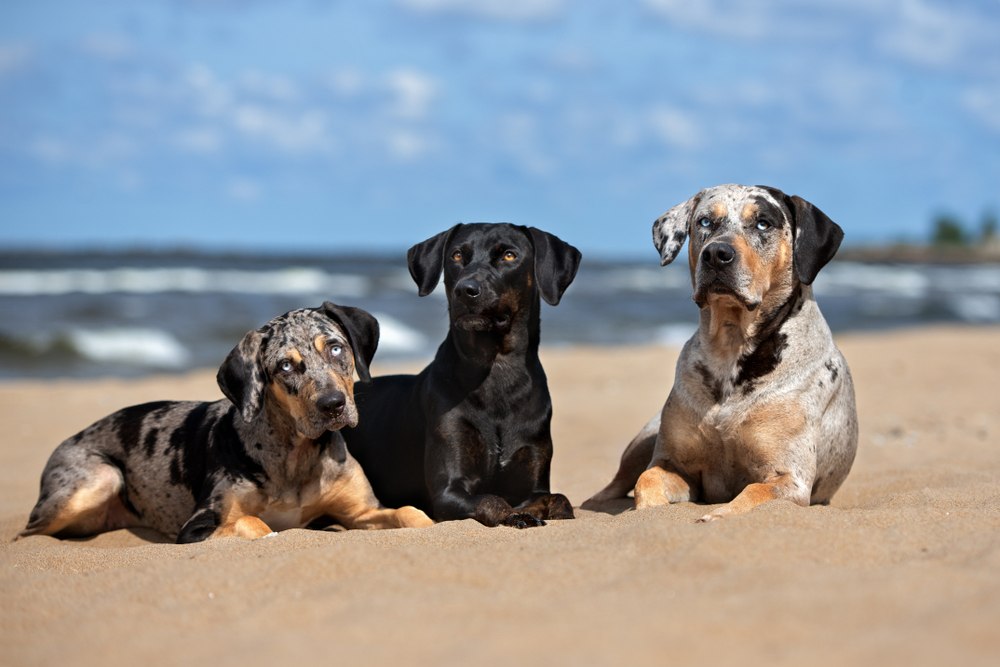 Labahoulas are the result of mixing two different hunting dogs- the Labrador Retriever and the Louisiana Catahoula Leopard Dog- to create the ultimate working dog hybrid. These athletic dogs have the assertive work drive of the Catahoula with the more even temperament of the Labrador Retriever to balance them out, but they will need hours of daily exercise or a working lifestyle to keep them content. While they may not be a recognized breed, Labahoulas are growing in popularity for their strong work ethic and unique looks. If you have the time and experience with hunting dogs, a Labahoula puppy might be the right choice for you.

Labahoula Puppies – Before You Buy…

What’s the Price of Labahoula Puppies?

If you’re looking into Labahoula puppies, expect to pay anywhere between $500-1200. Louisiana Catahoula Leopard Dog puppies usually cost anywhere between $400-2000, depending on the parents and other determining factors. Labrador Retrievers have a similar price range that also depends on bloodlines and sells for around $500-1500.

1. Some Labahoulas will have Heterochromia

Louisiana Catahoula Leopard Dogs are known for having heterochromia, which causes the iris in one or both eyes to have more than one color. Since they have such a high chance of having this condition, many Labahoulas also inherit this trait.

2. The first known Labahoula was bred in the 1980s

Before the designer-dog wave of the 2000s, various types of hunting dogs were being crossed to create the ultimate hybrid. The first purposely known cross of a Labrador Retriever and Louisiana Catahoula Leopard Dog was bred in the 1980s, though it’s possible that accidental crosses of these two purebreds have happened earlier than this.

Temperament & Intelligence of the Labahoula

While we can generally estimate how the temperament of a Labahoula puppy, it’s important to know that hybrids can wildly vary in temperament. Keep this in mind when shopping for any kind of mixed breed or designer dog, since it’s never a guarantee that your Labahoula will behave the way you imagine.

Labahoulas tend to have a gentler and more mild temperament than the Catahoula Leopard Dog, thanks to the gentle nature of the Labrador Retriever. They’re rarely aggressive and do well with children, though early socialization is crucial with these dogs.

Labradors are known for excelling in obedience and training, which is one reason why they’ve become one of the top breeds in the world. Catahoula dogs are also incredibly smart, often thriving in working and hunting situations. Because Labahoulas are bred from these two highly intelligent breeds, it’s safe to say that your puppy will be quick and eager to please.

One potential that you may encounter with Labahoulas is their desire to bolt and chase after animals (even larger animals), so you’ll have to prepare yourself for this possibility with your new puppy. A fenced-in yard is the most ideal setup for your Labahoula, as well as positive reinforcement training and some patience. However, even with consistent training, some Labahoulas will always have a natural instinct to chase and will have to be leashed for their safety.

These hunting hybrids can be suitable family dogs, as long as they’re given ample exercise daily. Labahoulas are best suited for active and outdoorsy types of families that can provide the time and training for this type of dog. They are naturally great with children and will naturally protect the family, which can be a good and bad thing. Consistent training and early socialization with other adults and children will be incredibly important to prevent your Labahoula from “protecting” the family when it’s not appropriate.

Yes and no. With some hunting dogs, it may be a concern if your household has other animals. It can be even tougher with the Labahoula since they may want to chase and hunt the other household pets, but this can be handled early. If you raise your Labahoula with a household that has pets, it will be easier to obtain a peaceful household. However, it may be more difficult to bring in new pets after your Labahoula has been established. Keep this in mind when buying a Labahoula puppy since they can live past 10 years.

Things to Know When Owning a Labahoula:

Labahoulas do best on a dry kibble diet that is high in protein with a healthy balance of carbs and fats. Since they’re naturally energetic and will burn a lot of calories, their diet will need to be carefully formulated to make sure they’re getting the nutrients needed on a daily basis. Consult your vet about the best brands of kibble to choose and the amount to feed daily to prevent weight gain or loss.

Exercise is the most important part of your dog’s day and Labahoulas will need lots of it. These dogs can spend hours working in the field, so multiple long walks and at least an hour of off-leash running (in a fenced-in location) is needed to keep them from destructive behavior.

Agility is another great way to exercise your dog, while also doubling down on bonding and training. These athletic mixes will excel in agility courses and competitions, which can ever turn into a fun hobby for you as well. As long as your Labahoula is old enough and is cleared by the vet, agility can be a fun and interesting exercise for your dog.

Consistency, confidence, and positive reinforcement are the keys to training your Labahoula puppy. While these dogs are often eager to please, they can be stubborn and try to become the boss of the house. If you’re not experienced with owning a hunting breed, you may need to look into a professional trainer to learn the confidence needed to control your dog.

Labahoulas do best with a “job” of some sort, whether it’s being a faithful gundog or working on the farm. That’s why these dogs do best with people that enjoy the outdoors or have active lifestyles, which helps keep their dogs from being bored. It’s important to remember this as you look into a Labahoula, as the Catahoula does best as a working animal rather than a pet.

Labahoulas have short coats that can be single or double in layers, so grooming will be easy for this dog. The occasional curry combing and a bath will keep the coat free of odor and dirt. Labahoulas come from two breeds that tend to shed moderately, which can be a deal breaker for some potential families. The shedding may get worse in winter months, so they’re not suitable for people with moderate to severe dog allergies.

Since Labahoulas are not purebreds and are rarely crossed with other Labahoulas, it’s difficult to know what health conditions are common in this breed. The best way to know is to look at the bloodlines of the parents of your Labahoula pup and determine any health patterns. Alternatively, taking a look at the health conditions of the Labrador and the Catahoula Leopard Dog can give you an idea of what you may have to face later on:

Labrador Retrievers tend to have more health issues, but Catahoula dogs that are mostly white are prone to being deaf. However, both the purebreds and the Labahoulas have relatively long lifespans, often exceeding the lifespans of dogs similar in size and weight. Even with the more serious concerns like cancer and Hip Dysplasia that can be genetically passed down, your Labahoula puppy should have a healthy, long life.

Labahoula males and females can have pretty big weight and height differences, so that’s the first thing to consider if you’re looking into this mix. Another thing to consider is that male Catahoulas may be more stubborn or difficult to train, which can be seen in some Labahoulas. But, aside from these main factors, the choice of female or male Labahoula should be a family decision and personal preference.

The designer dog world wouldn’t be the same without the Labahoula. These eager hunting dog mixes are so smart, lively, and usually have good-natured temperaments. Labahoulas are perfect for dog owners that enjoy hiking and camping, as well as hunters looking for a potential gun dog. Their natural athleticism makes them a great choice for professional dog trainers and agility competitors alike since they’re so energetic and designed for work. With adequate exercise, consistency in obedience training, and early socialization, this fun hybrid can also become the ultimate family dog. If you’re still interested in a Labahoula, we recommend looking for reputable hybrid breeders that have experience with this amazing designer dog breed.