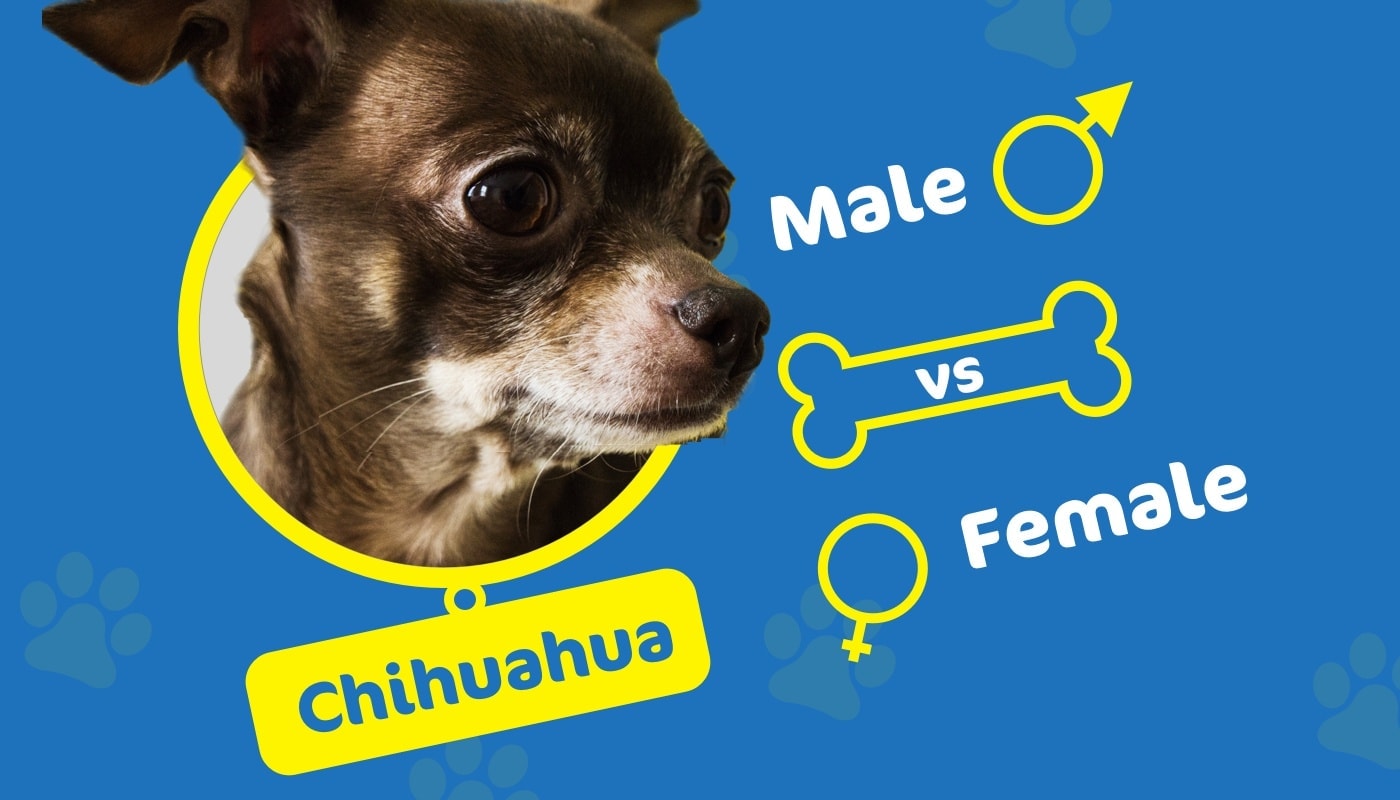 If you have your heart set on a Chihuahua, there is no point in telling you how adorable they are, or how they have many great characteristics. In fact, the reason you stopped at this article is probably because you were wrestling with the final decision of whether you should choose a male or female, right?

Unfortunately, that is not the easiest question to answer, and it will require more thought than just picking a gender out of a hat. Some marked differences between the two can affect which one will be right for you and your home.

To help you jump this last hurdle before Chi parenthood, we have shared the most important male and female factors below. Get ready to learn their personalities, traits, and other important details you should know before making a final decision.

As we mentioned above, choosing between male and female is not easy. One of the main reasons for this is because there is no personality trait you can assign to either gender that will hold true 100 percent of the time. Each Chihuahua is an individual, and their personality is based on several different factors.

Below, we have outlined some marked consistencies within each gender to give you a general idea of how your pet may behave. This is by no means a concrete rule, however, as each of these characteristics can switch roles depending on the individual pup.

For the most part, male Chis are more likely to challenge the authority of their owner. They will try to assert their dominance by growling, nipping, and barking if you try to touch their toys, treats, and food dishes. They will test the boundaries when you give commands by completely ignoring them, as well. This behavior can be worked out with training, though.

Females, on the other hand, are not as concerned with dominance when it comes to their owners. Interestingly enough, females tend to take an authoritative role when in the company of another male Chi.

When it comes to affection, the male wins the race. They tend to be more loving and in need of affection. Males are more apt to want extra pats, they will be more likely to follow you around the house, and they can be more jealous of other things that take your time.

Females, on the other hand, do not seem to need constant affection. While they are still loyal and happy to be in your company, they do not thrive on constant contact. A female will be able to sit across the room, or even in another part of the home, contentedly.

Both males and females have a great deal of energy to burn. As they are toy-sized, though, they will be able to burn the energy off more quickly than other breeds. What separates the two genders, in this case, is not overall energy but more on their ability to…chill.

Females have a higher tolerance for sitting still for longer periods. They can relax on your lap without the need to fidget and move about. Males, on the other hand, seem to have ants in their pants. They have more trouble staying still, and will not sit on your lap for long.

Aggression and barking can afflict either gender depending on their personality, upbringing, and care. Many people believe that males are more aggressive in general, while females bark more consistently. On the other hand, you could ask a separate sub-set of people and get the opposite answer.

For the most part, males will be slightly more aggressive than females simply due to their hormones and natural male instincts. Conversely, females can opt to bark more because of mood swings and other annoyances that bother them. Also, keep in mind though, you can have a manly Chi that barks his head off and runs at the first sign of trouble.

Overall, each Chihuahua is going to have a personality that is developed by several factors. If you decide on a male, there is no guarantee that he will be affectionate, stubborn, shy with women, and aggressive with not too much to say.

To shed a little more light on how each personality is formed, we will share some background on how a Chi becomes an individual. First, though, we want to talk about one contributing factor that makes a big difference in your pup’s personality and is more standard for each gender. That factor is hormones, which we will talk about next.

A very significant factor in the Chihuahua’s personality is whether or not they have been fixed. When the pooch is not spayed or neutered, their basic characteristics can be amplified, plus they can have several other quarks that are more consistent with the gender than things like affection and barking.

With that being said, hormones that cause physical and behavioral changes are different for males and females. First, let’s look at the female side of things.

Chi girls that have not been spayed can have some “issues” that are harder to deal with than the average pooch problems. Not fixing your furball means she will continue to go through a “heat cycle” that can cause behavioral and physical changes. Here are some of the concerns you should consider if you are thinking about a non-spayed Chi-girl.

If you decide not to spay your Chi pup, be aware that her heat cycle can begin as early as six or seven months old, and it will last throughout her entire life. Also, this more difficult time goes through four stages and only happens twice a year. That being said, it can last up to six weeks where these behaviors can fluctuate greatly.

Male Chihuahuas that are not fixed have their own set of behavioral and personality issues. Unlike females, a male does not experience a heat cycle, so these issues will be a normal part of their personality unless they are neutered. Here are some of the most common quarks:

When you choose a male Chihuahua, know that they will begin this behavior as young as seven months, or as soon as they hit puberty. It will also last throughout their entire lifespan.

Unless you are planning to breed your Chi, it is recommended to have them spayed or neutered as soon as possible. Accidental pregnancies can happen, which requires a large commitment on your part. Also, if you are not planning to allow your pet any “puppy-love,” some of these side effects can be uncomfortable for the dog.

Finally, Chihuahuas (and dogs in general) that are not fixed are at a higher risk for certain health risks which brings us to our next topic.

Both male and female Chihuahuas are equally at risk for basic doggie health concerns. When they are not fixed, however, they are more likely to develop serious diseases. This time, we will start with the males. They are prone to developing the following:

For non-spayed females, they can be at a higher risk for:

Beyond these issues, both male and female Chihuahuas will experience some health issues in their lifetime, depending on the individual pooch. They should see a vet regularly for check-ups.

As promised, we wanted to go over some of the other factors that will contribute to your Chihuahua’s personality. These aspects of your dog will help shape their personalities and determine how they are going to behave.

Now that we have gone through a considerable amount of information, you may still not know which is the right gender for you and your home. That being said, there are one or two other factors you should consider.

First, if you do not wish to have your Chihuahua neutered or spayed, take a peek through the neighborhood to see what other dogs are around. If you have a male that is not fixed, living next door to a non-spayed female might get a bit hairy at times.

Even if you do plan to take care of that issue, you still want to see what other dogs are around your neighborhood. Males can often have more of a need for walks, so a dog park close by is helpful. On the other hand, females do better in apartments or smaller homes.

If you are bringing a Chihuahua into a home that already has a four-legged friend, you will want to observe how they behave towards other dogs of the same and opposite sex. Finally, consider your feelings. Which gender do you feel more comfortable with?

Pros and Cons of Male vs Female Chihuahuas

To make things simple, take a look at these pros and cons:

We hope this article has given you the information you need to make the choice between a male and female Chihuahua. These cute and toy size pups are a great addition to most families and will be loyal, loving, and provide endless hours of laughter.

Remember, though: each pup has its own personality. Of course, with the right love and care, even the most stubborn Chis can be trained out of a sour disposition.