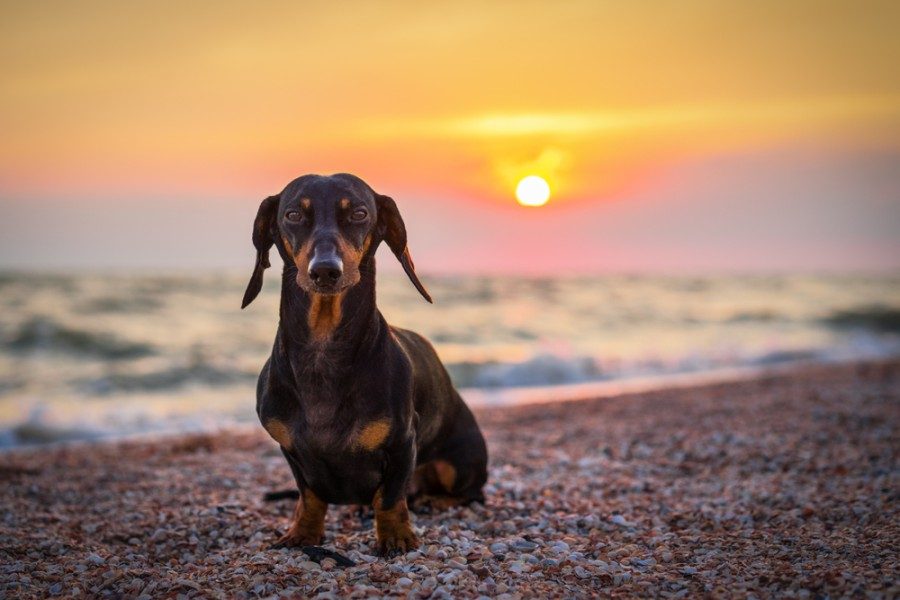 Most people in the 21st century are busier than ever, working to balance hours in the office and time spent with their family. Adding another being into the mix can seem overwhelming.

However, you have probably heard of the numerous studies advocating for a pet’s ability to reduce the stress and anxiety that you feel. So, you adopt a dog.

Most people forget, though, that many breeds need you just as much as you need them. If you are at work all day, they could struggle with separation anxiety or become destructive. So what are the best dog breeds for working couples or singles?

Instead of adopting just any cute puppy, look through our list of the 15 best dog breeds that don’t mind being left alone. They are typically breeds that are more independent and self-sufficient. Some of them are also passive dog breeds. Just remember to feed them and give them enough exercise, and they will be happy.

Chihuahuas are among the smallest dogs in the world, especially compared to purebred pups. These tiny dogs often weigh 6 pounds or less. They have a long lifespan, breaking records by consistently living 16 years or longer. This is also a dog breed that can be left alone.

Chihuahuas are easy to maintain in all the essential aspects involved in owning a dog. They need minimal grooming because they have short coats and do not shed much. Since they are so small, a couple of short walks a day keeps them healthy.

These tiny pups also have big brains. Their intelligence allows them to be trained quickly, especially if they have formed an emotional bond with you. Since they are so independent, they can be extremely stubborn with someone they don’t like. If you adopt a Chihuahua, keep in mind that they do best as a pair, although they do not mind many hours alone.

Basset Hounds are one of the sweetest, home-alone dogs you can find. They are happy to be around you as much as possible, but they have an extremely laidback attitude about it all. Their preference is to get as many hours of sleep during the day and night as they can.

Basset Hounds are incredibly self-sufficient and calm. They do well in homes with kids because of their heaps of patience. Even though they were originally bred to be hunters, trackers, and companion, their energy levels seem to say otherwise.

When you do come back home, don’t expect their energy levels to spike suddenly. Their preference will be to sleep on your lap instead of in the corner of the couch. Be aware that they still need plenty of exercise, especially since these pups struggle with obesity.

The Maltese is an elegant dog with plenty of pride bundled into their thick white coat. Even with all of their fluff, they are thought of as a hypoallergenic dog. Since they are small, they are well-suited to apartments.

Overall, Maltese has low energy levels, although it won’t seem like it when you first come home from work. These dogs can suffer from separation anxiety, especially if they are used to you being around frequently. They love a good snuggle, though, so give them plenty of time when you are around, and they will forgive you.

These pups need consistent grooming, but they only need a small amount of exercise to be satisfactory. They behave well with other animals, even cats. If they seem sadder at your absence, consider pairing them with an animal friend.

Greyhounds have an ancient lineage, originating in England. They have been the beloved pets to many royals around the world throughout the centuries. They used to be used as a racing dog, due to their streamlined body and speed. However, nowadays, they are more prone to be found under a blanket than in dog races.

These dogs are intelligent and have a solid understanding of how to behave differently inside than outside. It helps them do well in an apartment or smaller home. They do need plenty of exercise, though.

As long as they get enough activity, the Greyhound is happy to stay cuddled under a blanket on the couch for the rest of the day.

The Whippet is a smaller version of their distant cousin, the Greyhound. They share a few of the same ancestors and look and behave similarly. Whippets tend to be quite passive dogs and exhibit low energy levels in the home.

Much like the Greyhound, Whippets love to feel the wind in their short fur while they sprint. Give them enough time to run around in the outdoors, and they will happily sleep for the remainder of the day.

These dogs are not as social as Greyhounds and do not take as quickly to strangers. They also do best when paired with another pup.

If you an experienced dog owner looking for another fuzzy companion with a strong independent streak, consider the Shar-Pei.

These dogs are best known for the folds of skin that form all over their bodies. However, that isn’t the only characteristic that is noteworthy about them. Shar-Peis tend to be aloof and independent, preferring to get plenty of time alone.

A Shar-Pei likes to show their dominance in the household. Without a firm hand and proper training, they will take control and rule the roost. It is this characteristic that makes them generally unsuitable for first-time dog owners.

French Bulldogs, or Frenchies, make excellent companion dogs, well-suited as an addition to your family. They are loving and compassionate because they have such high emotional sensitivity.

While French Bulldogs do need plenty of human companionship, they do not need much attention otherwise. They have coats that are easy to maintain and only need minimal amounts of exercise.

Frenchies are great for apartments and small spaces. They do well with children. When you get home, expect them to demand as much attention as they can get from you. If you need to occupy them during the day, get them a distraction toy.

The Bullmastiff is one of the largest dogs on this list. They weigh over 100 pounds and are muscular dogs typically used as guard animals. Since this is in their breeding, they are genetically accustomed to spending large amounts of time sitting outside on their own.

These dogs need exercise but their energy levels are quite low. They are prone to heavy drooling, so watch out if they are roaming around the house.

These pups are commonly thought of as gentle giants, particularly with the right training. Bullmastiffs are extremely loyal and can be sweet family dogs.

Boston Terriers have a gentle, if not slightly excitable, nature. They were originally bred for fighting, but that trait has been entirely lost. There is no such thing as a stranger to these little pups.

Although these Terriers will need plenty of attention when you are around, they don’t mind time left alone. They need small amounts of activity each day, but nothing intense. Something like a game of catch in the yard or a park is enough for them.

Boston Terriers are loyal and intelligent, loving their family fiercely. If they do sense a threat, they won’t hesitate to try and protect you.

Irish Wolfhounds are pups that stand at gigantic proportions. They can be almost 3 feet tall and weigh upward of 200 pounds. However, they do not normally have an aggressive bone in their whole body.

The laidback tendency of the Irish Wolfhound makes them a genial dog with everyone in the family, from big to small. They are too large to live comfortably in most apartments but are happy enough to take up residence on your couch.

Irish Wolfhounds might be patient enough to wait while you are at work, but they don’t stick around in the long run. They have a short lifespan, between 6-8 years.

Lhasa Apsos are one of the oldest dog breeds that are still around today. They were originally bred in Tibet to be guard dogs for monks in mountain monasteries. Their lives were relatively solitary.

These genetic tendencies to be independent have carried through to today. They are happy to live in apartments and spend most of the day napping and exploring themselves.

Since they can have such a strong independent streak, they can start challenging to train. Once Lhasas know that you are in the lead, their intelligence means they will learn quickly. They do need plenty of grooming but are low-maintenance in terms of energy.

Miniature Schnauzers are one of the most popular dogs in the modern world. They are beloved across North America and throughout the U.K. and Germany. Part of this is their combined capacity to love and be obedient while still being laidback enough to understand that you need to run errands.

The Mini Schnauzers are not highly active dogs and like to spend plenty of time relaxing. They make excellent dogs for kids, and their cute looks make them charming in any situation.

Dachshunds, also called Doxies, are another small breed that does well spending time by themselves. With their short, dwarf legs, they are extremely low maintenance for their exercise needs.

Since they are so small, Dachshunds make a perfect choice for people living in a small space. They do love to have fun, so make sure to save time for tug-of-war or catch.

Doxies are a long-term commitment kind of dog because they can live for up to 15 years. They love performing and being the center of attention and get along well with children.

Chow Chows are one of the more rare breeds on our list. They originate from China and are another pup with a characteristic appearance. Chow Chows behave similarly to the Shar-Pei, exuding confidence and plenty of independence.

The Chow Chow is like a Chinese lion, with a fluffy mane of golden-red fur that puffs out from their whole body. They have unique blue tongues as well.

These dogs need plenty of socialization to learn how to behave well. They are laidback and do not need much exercise or one-on-one time.

Shiba Inus and Akita Inus both make excellent choices if you want to combine cute and independent. Both breeds were originally raised in Japan as a hunting dog, making them better as a solo pet.

Both the Shiba and the Akita are intelligent and need to be occupied mentally, even if you are not around, or they can become destructive. Try giving them a puzzle toy or consider keeping them in a pen.

These breeds need to be trained before left alone for long periods so they understand how to behave. This trait makes it better to adopt an adult dog instead of a puppy.

Are Dogs Omnivores or Carnivores? Here’s What Science Says