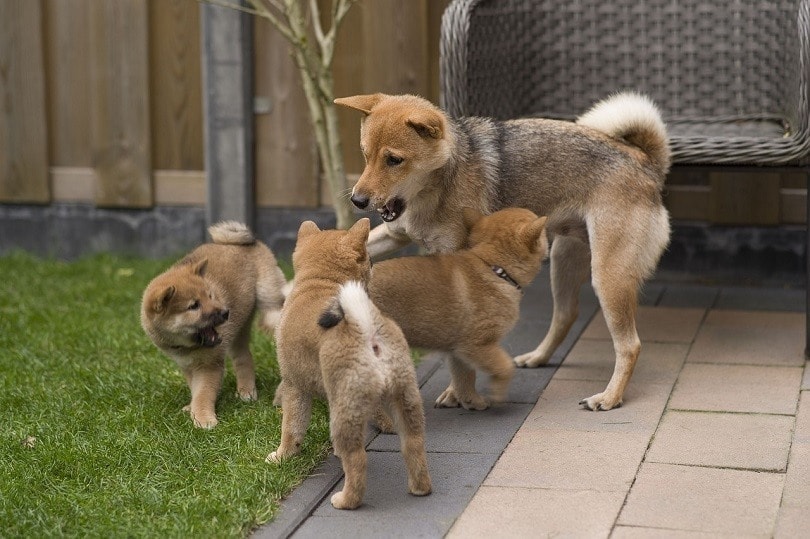 Shiba Inu dogs have a personality that is uniquely their own. They’re strong-willed and practically ooze dignity and superiority. Shibas are free-thinkers and independent, making them great dogs for apartments or dogs that can be left alone for extended periods of time.

They also make for excellent watch and guard dogs as they are fiercely loyal to their masters. However, Shiba Inus are not the best breed to have around children due to their headstrong personalities, or around other dogs because of their protective nature.

But that doesn’t mean you have to give up on owning a dog similar to the Shiba Inu. They belong to a group of dogs known as the Spitz breed. These breeds are characterized by their thick fur, pointed ears, and pointed muzzles. Let’s take a look at some other Spitz dog breeds and see which is right for you. 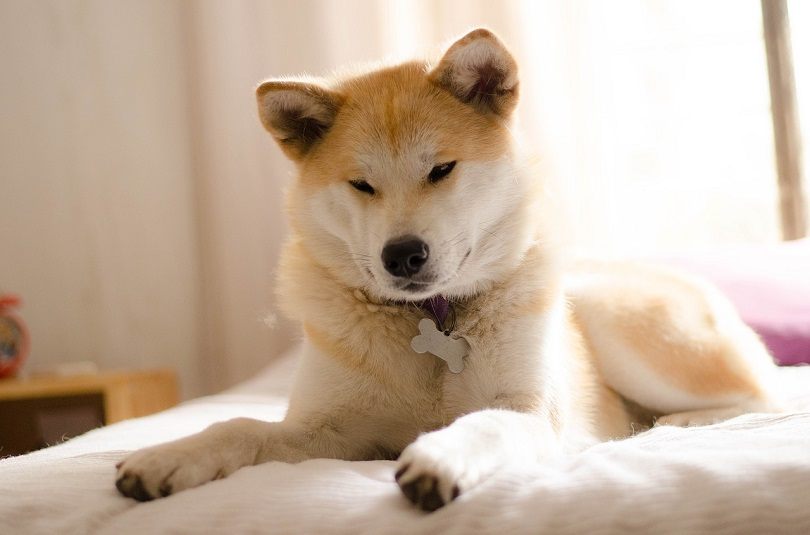 There are several native Japanese Spitz dogs, and the Akita Inu is the largest of them all. They retain many of the traits of the Shiba Inu as well. They’re strong, determined, and never back down from a challenge. They were originally bred by Japanese royalty and used for hunting of large game (including bears) and served as loyal guard dogs. However, with the right master, they have a silliness they aren’t afraid to show off. Akitas can also be very vocal and will “talk” to their masters about anything. 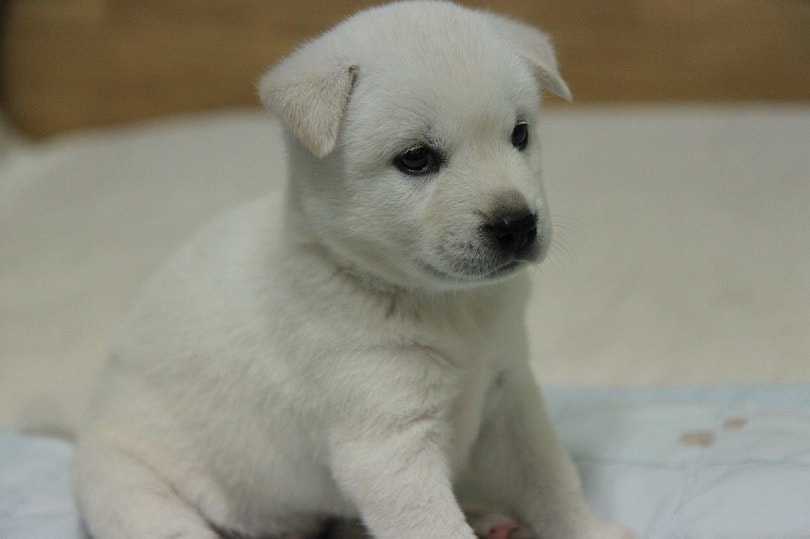 If you’re looking for an extremely loyal watchdog who’s very affectionate with every member of the family, a Korean Jindo may just be the right breed for you. Often used as guard dogs by the Korean Army, this breed is just as fearless as its Japanese cousins. And while they will be dedicated to your family, they’ll hold strangers or other dogs in reserve and be extremely protective of you. This can lead to some unwanted confrontations, so caution must be exercised when introducing this dog anyone new including other pets and children.

These pups don’t grow to be very big on the outside, but like other Spitz breed dogs, they’ve got tremendous heart. What really sets them apart from other breeds though is just how kind and family-friendly they are. They actually get along great with children and other dogs! However, they are also wary of first-time strangers. But once properly introduced, your Japanese Spitz will just be happy to have another friend. These are a great choice for first-time dog owners. 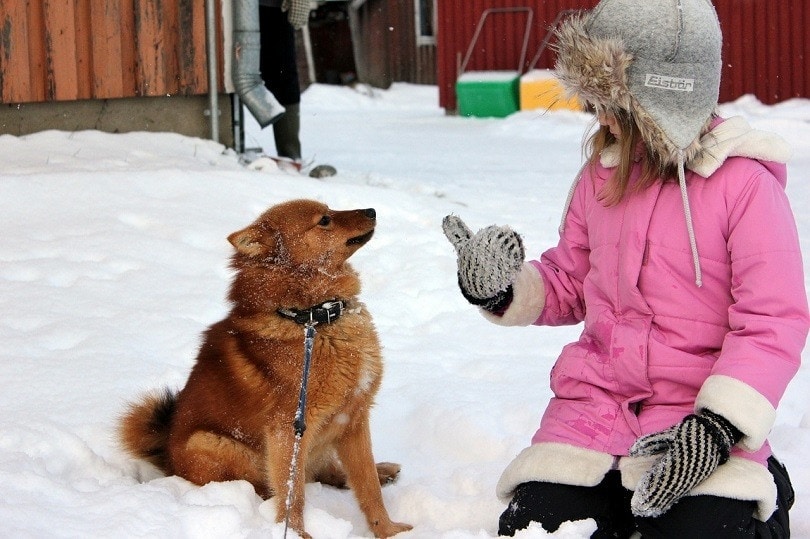 This talkative breed is another excellent choice for a family dog. They just love being affectionate with their families and other dogs. They’ll remain reserved around strangers, but warm up to them when they see they aren’t a threat. The Finnish Spitz is a very vocal breed though. They’ll bark to get your attention or to talk about anything. There’s even barking competitions in Scandinavia where this “King of the Barkers” has been known to bark 160 times in a single minute! 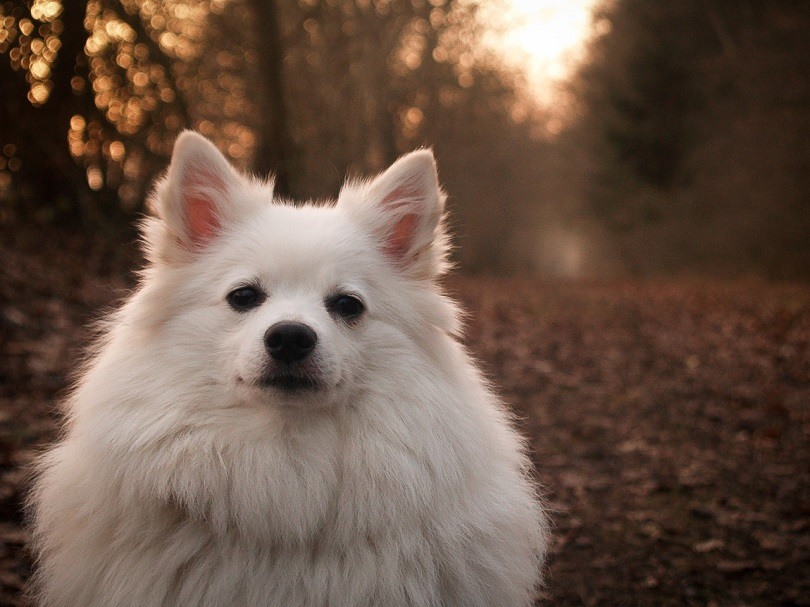 The German Spitz is just a little bundle of energy! They’re always just so excited to see their loved ones. Some may consider them to be a bit yappy, but most of the time that’s just them being playful and showing their affection. They do get defensive of their family, however. And they’ll always be alert you when someone’s knocking on the door or if there are any potential dangers around.

This medium-to-large working dog comes from the coldest parts of Northwestern Siberia. Although they have a very high prey drive, the Samoyed is just a wonder with children, other dogs, and even strangers. They’re super reliant on their pack, and as their leader, they’ll strive to make you happy. Needless to say, they’re not the best choice for a guard dog. Samoyeds are one of those breeds that’ll actually help a burglar rob your house. They’re just so friendly. These dogs also need room to run and lots of exercise to stay happy and in top shape. 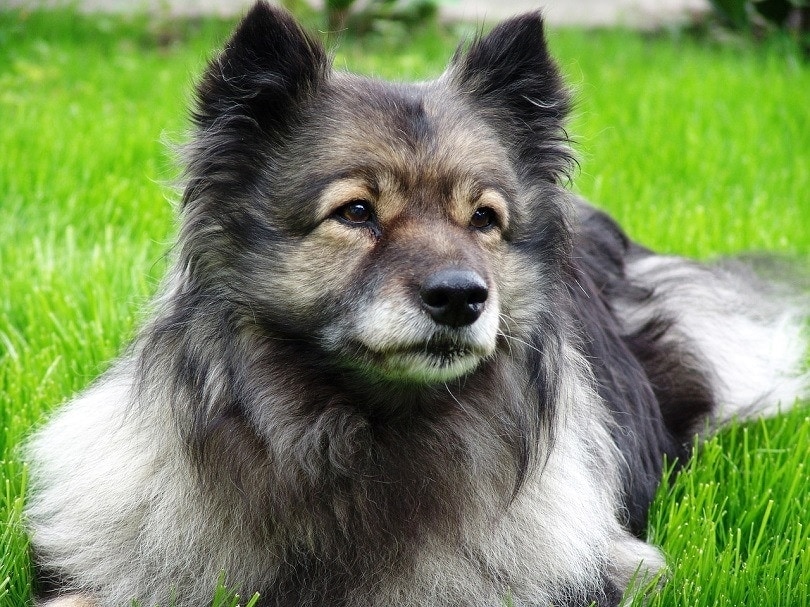 The Keeshond is a very unique Spitz with a dense two-layer, two-toned black and silver coat. They hail from Holland where they once served as companions to the boat and bargemen of the canals and rivers. They absolutely adore their owners and children, making for a great companion dog. They keep a watchful eye out for strangers and other dogs but relax when they realize there’s no imminent threat or danger. 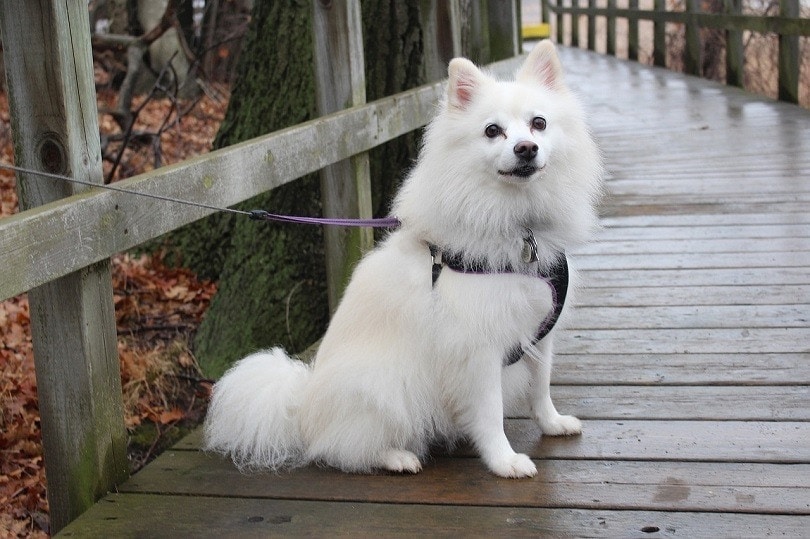 American Eskimo Dogs (Eskies) are some of the most beautiful dogs you’ll ever lay your eyes on. They have a super fluffy, double white coat and a sweet smile that’ll melt just about any heart. That being said, they shed a lot and require constant grooming in order to keep them looking their best. Fortunately, Eskies just love the attention they get from grooming. They really are lovers and enjoy almost all forms of positive human interaction. 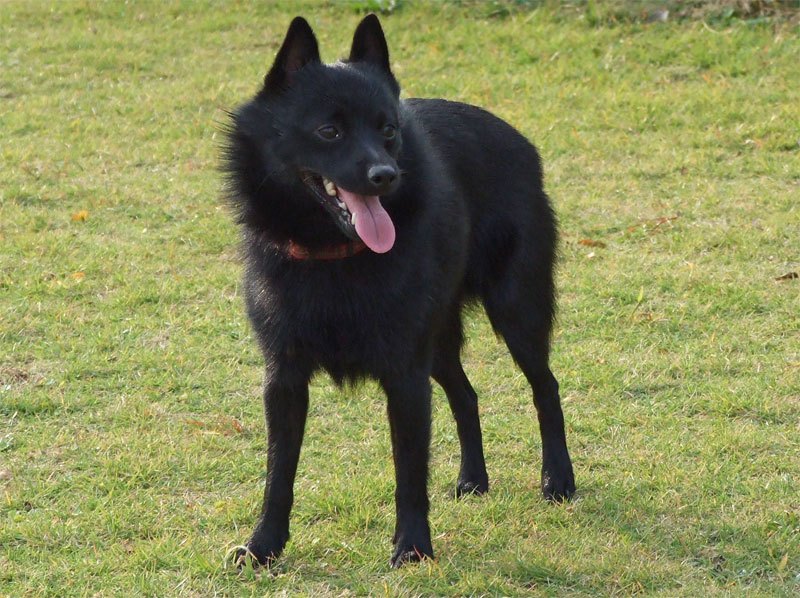 These little black fox-faced dogs originated in Belgium and helped guard the boats and canals of the Low Country. Known as Belgium’s “Little Captains,” the Schipperke were notorious ratters and mischievous little devils. Unlike the other dogs on this list, the Schipperke is not a true Spitz. In fact, it actually derives from a black sheepdog known as the Leauvenaar.

The Kugsha is a Spitz-type dog often called the Amerindian Malamute or American Husky. They aren’t officially recognized by any Kennel Club, but they’re still great pooches. Their breed origin seems to be part wolf and part Husky. And thus, they are a very large dog breed. They can stand up to 27 inches tall and weigh 110 pounds. And Kugshas aren’t the best cuddlers and don’t make for great family dogs, but they are phenomenal working dogs that are extremely loyal to their pack leader — you. 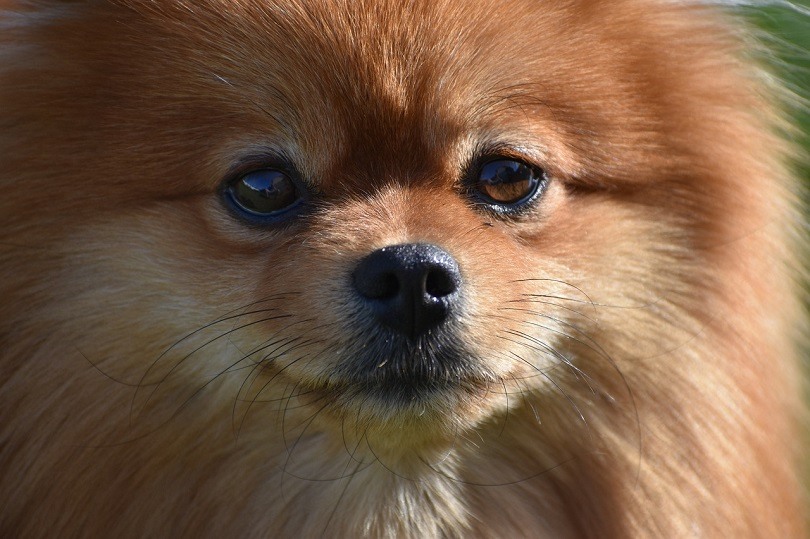 Pomeranians are the smallest of all the Spitz dogs. And it’s absolutely incredible how much personality they can fit inside that tiny frame of theirs. If you’ve ever met a Pom Pom and its owner, you can tell one thing right away. Pomeranians are super-protective of their owners, and they have no qualms about showing exactly that. They are known to get nippy at times to strangers, children, or other dogs. And while this can be an endearing quality, it can spell trouble for a Pomeranian. Their minute size and extreme lack of fear can get them into compromising positions.

Dogs of the Spitz breed, such as the Shiba Inu, are a very special type of canine. They all form absolute die-hard bonds with their masters and will protect them until the end of time. Spitz breed dogs generally have big personalities and are headstrong. And they’ll need a master who has just the same and can take charge as a pack leader.

Remember though, many of the larger varieties of Spitz aren’t suited to being couch potatoes. They’re working dogs that love to run and play with a penchant for being certified escape artists. Strong-willed enthusiastic dogs such as these aren’t necessarily the best for first-time dog owners. But if you’re experienced and are up for the challenge, these dogs can make wonderful companions — both in a working and personal environment. 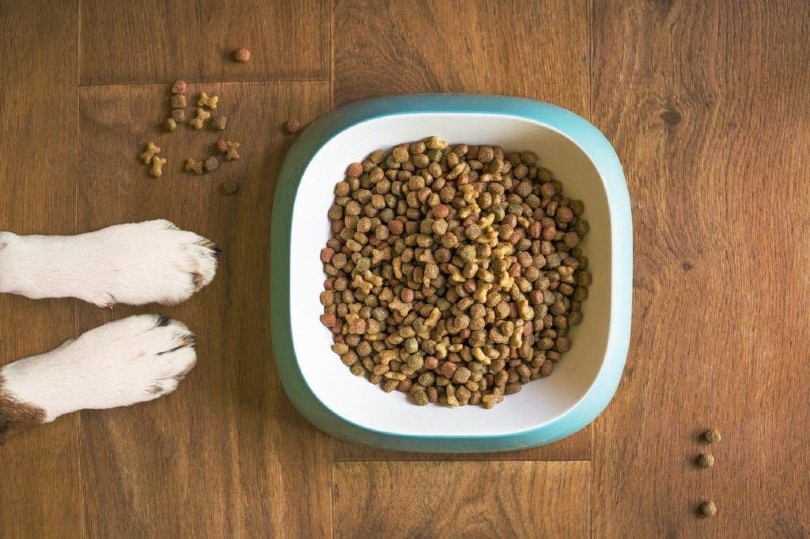 Can Dogs Eat Tangerines? Are They Safe for Dogs? 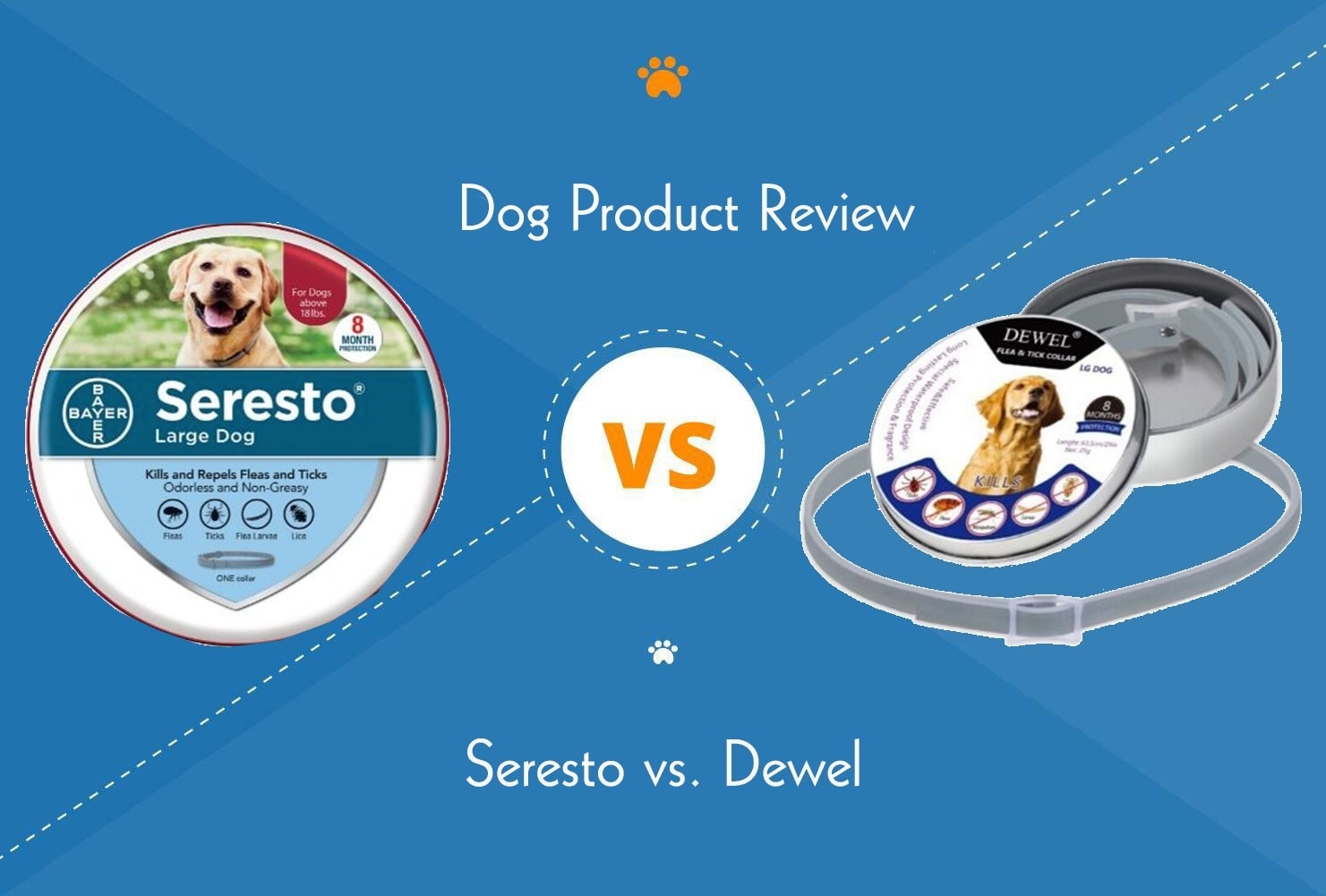 Seresto vs Dewel: Which Flea & Tick Collar Is Better?