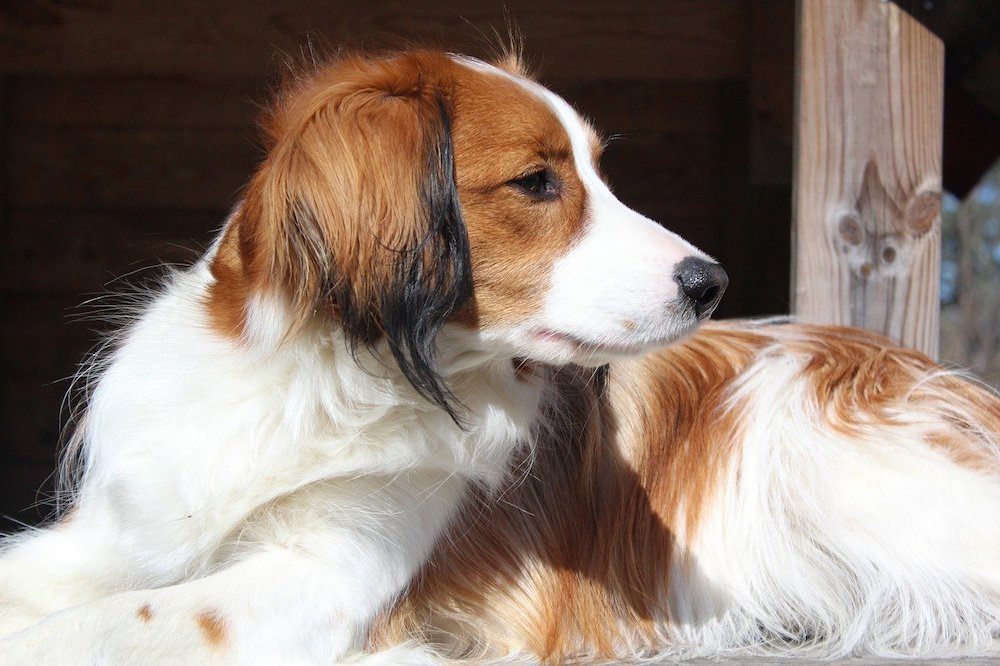 Does the idea of a smart, sweet dog that will love to learn tricks and commands appeal to you? Then take a closer look at the Dutch Kooikerhondje!

A medium-small breed, the Kooikerhondje is an agile and friendly canine. Their intelligence and athleticism mean they relish activities with family and will excel in all manner of dog sports in which they have close contact with their owner.

The Kooikerhondje is an old breed from the Netherlands and is believed to have been developed in the 16th century. They were bred as tolling dogs for luring ducks into traps. As duck populations dwindled, however, the Kooiker dog fell out of use.

By World War II, the Kooikerhondje was nearly extinct, but fanciers in Holland resurrected the breed. Though a popular and well-loved breed in the Netherlands, these dogs are still quite rare in the rest of the world. Today they are mainly bred for companionship and competitions.

Kooikerhondje Puppies – Before You Welcome One Into Your Family..

Sweet and frisky, Kooikerhondje puppies have a perky tail and soulful eyes. It may take a moment for these sensitive creatures to decide if they’re ready to make friends, but once they do, you’ll have a thoughtful, devoted, active companion for many years to come.

We know, they’re impossibly cute. But don’t forget that as they grow you will need to continue to provide them with care, exercise, and emotional support. These dogs usually live well into their teens, so it is not a commitment to make lightly.

It may be challenging to find a Kooikerhondje breeder in the United States, as this breed was almost exclusively found in the Netherlands until recently. It could be worthwhile to cast a wider net when searching and check with European breeders, too.

1. Kooikerhondjes Are Featured in Dutch Art

Many Dutch master painters of the 17th century featured Kooikerhondjes in their art. You can see these dogs in the work of Rembrandt, Jan Steen, and Johannes Vermeer.

2. The Kooikerhondje Will Love Having a Job

These dogs are smart as a whip and hardworking to boot. Historically, the Kooikerhondje was bred and trained to trick and trap ducks. They stayed patient and alert during hunts, and even used their jaunty tails and playful antics to lead duck flocks into man-made ponds.

With this keen breeding in mind, you can see why these highly industrious, agile, and intelligent dogs will benefit from both physical and mental stimulation. They will learn tricks and commands with alacrity, and love having a job to do!

3. A Kooikerhondje Once Saved the Life of Royalty

A Kooiker dog is said to have foiled an assassination attempt on his royal master’s life. William the Silent, Prince of Orange was in Hermigny, France during a campaign against the Spanish. One night as the prince slept, an assassin crept into his tent.

Pompey, the prince’s loyal Kooikerhondje, heard the assassin as they neared the tent and began barking and scratching his master to warn him of the impending danger. He finally woke William up by jumping on his face, and thus saving the prince’s life — albeit in a very undignified way!

You can see Pompey carved lying at his master’s feet in the monument to Prince William at the Church of St. Ursula in the Netherlands.

Temperament & Intelligence of the Kooikerhondje 🧠

Like with many similar spaniel type dogs the Kooikerhondje is gentle and easygoing in the home with a driven, dedicated attitude in the field.

This dog is a tireless worker that stays alert and tuned in to their handlers while on a job. And when at home their attentive, sensitive demeanor makes them a loving family dog.

Though affectionate with their family, this breed can be shy with strangers. They are watchful and thoughtful, taking their time to decide whether a stranger is friend or foe. Quiet, reserved, and keenly intelligent, the Kooikerhondje can be trained to be a proficient watchdog.

The Kooikerhondje is a bright and highly trainable dog who needs mental stimulation in addition to regular exercise to be truly happy and healthy.

The Kooikerhondje is a good-natured pup that loves having a family to play with and shower affection on. As long as you socialize them with children early, they can be thoughtful and energetic companions for kids and adults alike.

As a highly intelligent and receptive dog, the Kooikerhondje is especially sensitive to harsh words and rough handling. Teach your kids how to respect their furry friends too, and harmony will thrive!

As with many smart breeds, the Kooikerhondje may develop a take-charge attitude with other pets if not properly socialized. With some guidance from their owner, this thoughtful dog can easily get along with other dogs and cats.

And though they are usually gentle, always supervise your Kooikerhondje around any small pets or prey animals. Even in a friendly interaction canine play can be too stressful or physical for many small animals.

Things to Know When Owning a Kooikerhondje

Getting a dog is not a lightly made decision. There is a lot of responsibility, daily care, and planning necessary to keep a dog happy and healthy.

Here are some further considerations about the Kooikerhondje to give you a better idea of whether this breed is the right one for you.

A well-balanced dry kibble is often the smartest and most convenient way to make sure your Kooikerhondje is getting all the nutrients necessary for their active life. High-quality brands will have a diverse array of whole food ingredients like lean proteins, veggies, fruits, and a small number of grains.

Lean proteins and fats are especially important for the Kooikerhondje. Proteins help build this athletic little pup’s muscles, and fatty acids like omega-3s will support brain development and joints.

To keep your bright Kooiker pup from growing bored at mealtime, try giving them some treats with their standard kibble. Many dogs go bonkers for fish, blueberries, carrots, and even sweet potatoes! Talk to your veterinarian about portion sizes and different foods to try out.

Though of medium-small build, the Kooikerhondje is an active dog and needs quite a bit of exercise. For this reason, we do not recommend this breed to apartment dwellers. Your dog will need multiple one-hour long (or longer) occasions throughout the day to go outside and exercise.

While the Kooikerhondje will enjoy walks and hikes, their keen minds will especially relish more mentally engaging activities. They love games like fetch, playing in water, dock diving, and excel at a variety of canine sports.

Your Kooikerhondje will especially love activities that they can do with you! They have been bred to work closely with their owners and are eager to receive direction and do a job well. Try dog agility courses, or obedience competitions, or any number of both mentally and physically stimulating games.

Training your Kooikerhondje should be fun and easy. They are exceptionally smart and learn commands and tricks with alacrity. If you approach their training with patience, and gentle guidance they will flourish.

Their smarts also mean that training these pups is a necessity. Smart dogs that lack the structure of training will likely act out, mostly out of boredom. Excessive barking, chewing inappropriate items, and neurotic behavior are all ways that smart dogs ask for attention from their owners when they are not being sufficiently stimulated.

The long, silky double coat of the Kooikerhondje may look like it needs a lot of upkeep, but fans of the breed insist that the opposite is true. Their long fur is water-resistant, does not pick up dirt easily, and even defies tangling!

You won’t have to invest much time or money in keeping your pup’s fur in tip-top shape. Simply brush your Kooikerhondje’s coat once a week and give them the occasional bath.

With all dogs, you should be checking their ears, teeth, and nails regularly as well.

Check your dog’s ears once a week and clean as needed of any dirt and wax that may build up to prevent parasites and infection.

To clean their teeth and keep their gums healthy, give your dog a gentle tooth brushing once a week. Plus, enjoy the benefit of fresher puppy breath and sweet-smelling kisses!

Your Kooikerhondje may be active enough that they will wear their nails down naturally, but we still recommend checking them every two weeks or so. Long nails can crack painfully and leave nasty accidental scratches on you and your pup.

Fortunately, the relative rareness of the breed also means that breeders are more selective and careful with their litters, which contributes significantly to the overall health of the Kooikerhondje.

Though a generally healthy dog, there are still a few health concerns to keep an eye on for your Kooikerhondje.

The male Kooikerhondje grows slightly larger and is more liable to participate in sexually aggressive behavior like humping or mounting and territorial urine marking. Female dogs are more petite and often quieter, or more docile.

So, is the Kooikerhondje the right dog for you?

If you live a sedentary lifestyle or do not want to put the time into training a keenly intelligent and active dog, then maybe not.

But, if you are seeking a small, cheerful canine companion to play, adventure, and learn to communicate with, the Kooikerhondje could be the perfect dog breed for you!