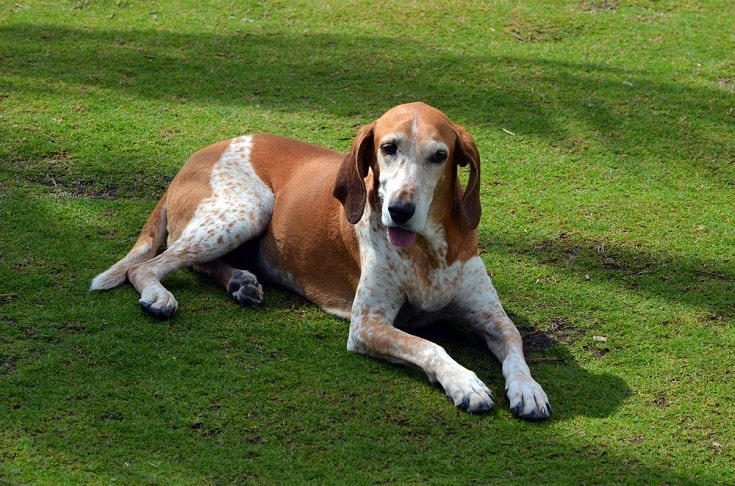 The American English Coonhound is a mellow, active dog that appears to be a mix of hunting Hounds and a Beagle. They are commonly dappled with tan and white spots but can have black or dark brown spots thrown in the mix.

American English Coonhounds originate in the 1700s. They make excellent family pets due to their overall laidback natures. These pups are always ready for the next adventure and have the energy to take them there. If you are an active person, they make a wonderful explorer’s companion.

American English Coonhound Puppies — Before welcoming one into your family

1. The American English Coonhound was part of the founding father’s families.

The name of the American English Coonhound can be confusing. Going back to their origin story, we find that they have English ancestors yet are American by birth. They are one of six coonhounds that were bred primarily for trailing and treeing in North America.

One of their claims to fame involves George Washington and his hand in their early years of breeding. He developed an interest in foxhunting during Great Britain’s time in the American colonies. After the war, the English-style horse and hound foxhunts remained, and importations of English Foxhounds were commonplace.

These foxhounds were used to create most of America’s coonhound breeds, and George Washington became one of their earliest breeders. For coon hunters, American English has remained one of the most popular coonhounds. They are generally regarded as the fastest of the coonhound breeds as well.

2. These dogs originated in efforts to overcome scent loss in Virginia Coonhounds.

In the south, the game utilized trees to escape from the dogs. This presented one of the weaknesses of the Virginia Coonhound, namely that they couldn’t keep a scent when an animal climbed into a tree.

To overcome this issue, these Coonhounds were crossed with the Bloodhound, known for having one of the strongest noses in dog-kind. The result was the American English Coonhound.

3. They didn’t receive recognition from the AKC until 2011, even with hundreds of years of history in the U.S.

Even though the dog was initially called the American English Coonhound, they didn’t gain recognition for many years. Part of this was because the Coonhound umbrella fell over many similar breeds, including the Bluetick Coonhound and the Redbone Coonhound.

Over time, all these dogs began to be classified separately and distinguished as separate breeds. Finally, in 1905, the United Kennel Club acknowledged the American English Coonhound, even though their breeding began in the 1700s.

That wasn’t the beginning of the recognition for the American English Coonhound, though. It was 1995 when the Foundation Stock Service from the AKC recognized the breed as separate from other Coonhounds and Foxhounds. In 2011, the AKC officially recognized the breed and they can now compete in the Hound group.

The American English Coonhound is a mild-mannered dog with a sweet disposition. They are highly sociable and prefer to be out adventuring and meeting new people and animals whenever they can. They have a strong pack mentality, meaning they do particularly well in any family scenario. Keep in mind that they are hunting dogs at heart. Small dogs and cats can be mistaken as prey if your dog is not appropriately trained.

American English Coonhounds are renowned for their vocalization, being among the biggest barkers and howlers out there. They will instantly express themselves through baying when they are outdoors. Typically, they do well at recognizing what is appropriate indoors and are quiet and calm. They are highly trainable and can be good dogs for the first time, highly active dog owners.

These dogs are excellent members of any family. They are obedient and docile. With their pack mentality, they prefer a family environment where everyone cares for each other. They will lovingly be a child’s companion for many years if given the opportunity.

With the combination of their pack mentality and their overall sociability, American English Coonhounds get along well with other dogs. It is typically better to have them in a home with other pups because it helps them be active and gives them constant companionship.

Very small dogs and any cats can be seen as prey if they are not trained otherwise. Be careful about releasing any small animals in the house if you have not introduced them as part of the family to the American English Coonhound yet.

Things to Know When Owning an American English Coonhound

The American English Coonhound is a medium-sized, highly active dog with a fast metabolism. These pups need about 3 cups of food each day to keep them full to the brim with energy and proper muscle development.

If your pup is highly active, make sure to feed them food that supports their lifestyle. Give them plenty of quality protein and digestible fats so they are properly supported.

The exercise requirements of this pup are one of the more rigorous aspects of owning them. They are considered high-energy dogs and need plenty of daily activity to keep them out of trouble.

If they get enough activity, they are a surprisingly docile dog indoors. They seem to understand when it is appropriate to express themselves and run around. To satisfy the dog’s activity needs, you should make sure they receive approximately 90 minutes of regular exercise each day.

Giving American English Coonhound daily activity can be expressed in a multitude of forms. Take them on multiple daily walks or out for runs. Aim for at least 10 miles each week. Since they are so sociable, you can also consider taking them to a dog park.

If you are a hunter or enjoy hiking, bring them with you. It is easy to train them, so laying down ground rules should go quickly and make the activity enjoyable for both of you.

Training the American English Coonhound is much less rigorous than with many breeds. Socialize them as early as you can, so they grow up knowing the appropriate behavior around other animals.

These pups are hounds through and through. They are tenacious and stubborn on the trail yet golden when indoors. Their prey drive will be the most challenging aspect of their training, depending on how you want to mold it. Watch out for their ringing bark as well. Work on what should and shouldn’t be barked at from an early age.

Grooming is low maintenance for the American English Coonhound. They have short, wiry coats that are protective of their skin. They still need a good brush at least once a week to keep their shedding minimal.

Brushing them with a de-shedder or grooming mitt not only prevents as much shedding but also enables the oils needed for a healthy coat to spread from their skin to the follicles. Trim their nails about once a month if they do not wear them down naturally.

These dogs can have a doggy odor about them if they do not receive enough baths. Bathing them about every six weeks helps eliminate this odor. However, use a gentle shampoo so it doesn’t dry out their skin. Check their floppy ears and clean out any moisture to prevent ear infections.

The American English Coonhound is generally a healthy breed. They are bred primarily to be a working dog and have a peak physical condition. However, there are common disorders that the breed develops as they grow older. Eye and ear issues can be typical. They are a deep-chested breed as well, so they can experience painful symptoms of bloating.

There are no recognizable differences between male and female American English Coonhounds.

The American English Coonhound is an English hound born in America with sweet temperaments when inside and stubborn active ones when outside. They are lovable and energetic and need owners who can dedicate plenty of time to their daily exercise.

If you love to be outside and explore or go for long runs, these could be the dogs for you. They have a strong work ethic and feel better when they have a job to do. If you live on a farm or ranch, they will be happy to join you. If you are a hunter, they are highly trainable and can make excellent companions.