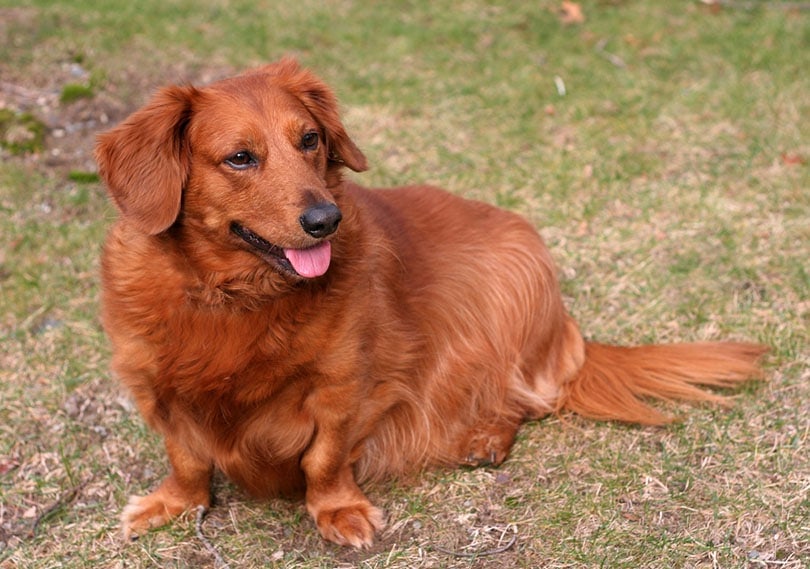 Sometimes you hear about a new dog breed, and the first thing you think is, “How did that happen?”

Such is the case with the Golden Dox, a cross between a Golden Retriever and a Dachshund. The result looks like a low-rider Golden Retriever, which is to say, it’s adorable.

If you adopt a Golden Dox, chances are that you’ll be the first person on your block to have one. While that gives you a certain amount of street cred, it also limits how much information you’ll have about these dogs before bringing one into your home.

In the guide below, we’ll walk you through everything you need to know about these altitude-challenged dogs.

Golden Dox Puppies — Before You Buy…

You might not think that Golden Retrievers and Dachshunds would have enough in common that would make them worth cross-breeding, and we won’t deny that it’s an unusual pairing. However, Golden Doxes usually take from the best of both parent breeds, making them great pets.

They have as much energy as regular Golden Retrievers, but since their legs aren’t that long, they can’t quite tucker you out quite as much. This makes them great for families that are active but not too active, as they love to play but don’t require hours and hours of exercise.

That’s not to say that they’re perfect, however. The Golden Dox has a strong prey drive, and they tend to be both intelligent and stubborn, which can be a difficult combination.

All in all, though, these are great dogs for families of any size.

You might expect a Golden Dox to cost half as much as a Golden Retriever, given their size. However, these dogs cost about as much as a regular Golden will run you, which is anywhere from $500-$1,000.

You’ll likely need to go through a breeder to get your hands on a Golden Dox, and there aren’t many out there, so procuring a puppy could be a bit of a challenge. These dogs don’t often show up at shelters or rescue groups, either, so be prepared to hunt around on the internet to find a reputable breeder.

Notice that we said “reputable.” Beware of anyone offering too-good-to-be-true prices, as these are often backyard breeders who mistreat their animals. Do as much research as you can, and always check references.

This might not be such a little-known fact, as you can probably tell at first glance that these animals won’t chase a burglar away. However, their failures as guard dogs go beyond their little legs.

These animals are friendly and welcoming toward strangers, and they’ll likely think that the strange person climbing in your window at 3 a.m. is there to play fetch.

They don’t bark much, which makes them great for apartment dwellers, but don’t be surprised if you get robbed and they never once sound the alarm.

2. They Have Two Settings: Full-Speed and Asleep

You’ll be amazed at how much energy the Golden Dox has, as it seems like they never stop playing or sprinting around the backyard.

However, their zoomies stop just as quickly as they start. These dogs love to cuddle up next to you on the couch, and they can spend hours watching TV at your side.

Just be aware that they’ll take you getting up as a sign that you want to play!

As puppies, these dogs have low-slung backs, much like full-blooded Dachshunds do. As a result, their backs need support when they’re picked up, and they can’t be handled as roughly as some other breeds.

If you have small children in the house, be sure to supervise them as they play, and educate them on the correct way to handle the puppies.

Temperament and Intelligence of the Golden Dox

These mutts are extremely smart and they take to training well. That’s good because training is essential, as they also have a strong stubborn streak.

They’re generally easy-going and friendly, as mentioned. That makes them great around small kids, and they’ll welcome strangers into your home.

Golden Doxes tend to want to be the center of attention, though, so don’t be surprised if you and your guests both have to pet them throughout the entire visit. This can also cause them to treat you as a resource to be guarded, which can cause issues if left unchecked in a multi-dog home.

Golden Doxes make fantastic pets for families, especially those with small children, as they have big-dog energy in a much smaller package. They’re less likely to bowl over small children, and they’re at the perfect height for everyone to pet.

The fact that they’re equally content with playtime and snuggle breaks makes them ideal companions as well. They can keep up with active families but don’t require you to be able to run a marathon.

That doesn’t mean they’ll be suitable for total couch potatoes, though. They do have demanding exercise requirements, so you’ll need to burn off their energy somehow. They just won’t run you ragged the way a full-blooded Golden Retriever will.

Golden Doxes tend to get along well with other dogs, although as noted, they prefer to be the center of attention, which can occasionally cause issues. For the most part, though, they’ll welcome new canine members into their pack.

They’re less suitable for households with smaller pets like cats, guinea pigs, and the like. They have a strong prey drive, so when they see these animals, they tend to go into hunting mode.

This isn’t true of all Golden Doxes, and you may be able to mitigate it with training, but for the most part, you should avoid this breed if you want to keep the rest of your menagerie safe and sound.

Things to Know When Owning a Golden Dox

These mutts are fun but they require work too. If you’re not prepared for the level of commitment that a Golden Dox requires, it could cause your entire ownership experience to be a disaster.

Below, we’ll give you a brief idea of what owning one of these dogs is like.

It’s never a good thing for your dog to get fat, but keeping your pet’s weight under control is especially important for Golden Doxes. They have the same low-slung back that Dachshunds have, and it’s not designed to support extra weight.

As a result, you want to feed them a high-quality food without empty calories; this means no cheap fillers like corn and wheat, and if you must have grains, make sure they’re high on the glycemic index.

We typically recommend a high-protein diet, and we think it’s especially useful for this breed. Protein will give them all the energy they need to run around, while also ensuring their muscle tone is well-built and there’s little fat on them.

Don’t overfeed them, and go easy on the treats and scraps. These dogs can run on praise and head scratches, so there’s little need to incorporate treats into their training.

These animals require a great deal of stimulation, both physical and mental. The bare minimum you should give them is a long walk or two every day, but for many of these pooches, that won’t be enough.

They love to play, so games of fetch, tug-of-war, and tag will go over well with them. They also take well to agility training, and basic obedience work is necessary as well.

Many Golden Doxes love to swim, but that’s not true of every individual, so don’t be surprised if yours prefers life on dry land. If they do take to water, then swimming is a fantastic, low-impact way to tucker them out.

They tend to love going to the dog park, and they usually behave themselves while there. Just keep a close eye on them during the summer, as they’re prone to overheating.

It’s imperative that you train the Golden Dox early and often, because if you let their stubborn streak get out of hand, you could have a little tyrant on your hands.

Socialization is also critical, especially if you’re planning to incorporate one into a house that already has dogs or other pets. Make sure they’re introduced to a wide variety of environments early on in life, and reward them for good behavior while there.

Positive reinforcement is the way to go with these dogs, as criticism usually only causes them to retreat into their shells. They love to please you, so a few words of praise and a pat on the head will go a long way.

Group training classes are a good idea as well, as they offer a double whammy of socialization and obedience work. Just make it clear to your Golden Dox that you’re there to work, not to make friends.

The Golden Dox doesn’t shed as much as some other breeds, but they’re certainly a far cry from hypoallergenic. Expect a little bit of shedding every day, all year round.

You can probably get away with only brushing your golden weiner dog once a week, but we’d recommend that you do it daily. Also, they’ll need a haircut every couple months, so it’s a good idea to make friends with a groomer in your area.

The Golden Dox has extremely floppy ears, which means they’re prone to ear infections. You should clean their ears out regularly — at least once a week (and every time after they go swimming). All it takes is rubbing a damp cotton ball around inside, and you’re done.

We recommend brushing their teeth daily, and nails should be trimmed as needed, but these dogs are often so active that they file their claws down on their own.

Golden Doxes tend to be fairly healthy and aren’t as prone to congenital conditions as many purebred breeds. However, they do tend to be more delicate than other dogs, so be careful about playing rough with them.

Both male and female Golden Doxes tend to be about the same size, so don’t expect to be able to guesstimate their final form just by checking between their legs. Expect a medium-sized dog, no matter the gender.

As far as personality goes, they’re similar there too. A female Golden Dox tends to be a bit more clingy, whereas the male Golden Dox is typical in that they only care about play time.

Generally speaking, though, you’ll have a dog who spends most of their awake time playing at full speed, and their downtime curled up next to you. This is true whether you have a boy or a girl Golden Weiner Dog.

The Golden Dox may not be your typical designer breed, but it’s a ton of fun on four tiny legs. You won’t find a dog who loves to play more, but they understand the importance of a proper work-life balance, and so they’ll spend time in your lap too.

If you don’t have the time or energy to commit to a high-maintenance dog, then the Golden Dox probably isn’t right for you. For many people, though, the Golden Weiner Dog will make the perfect addition to their family.