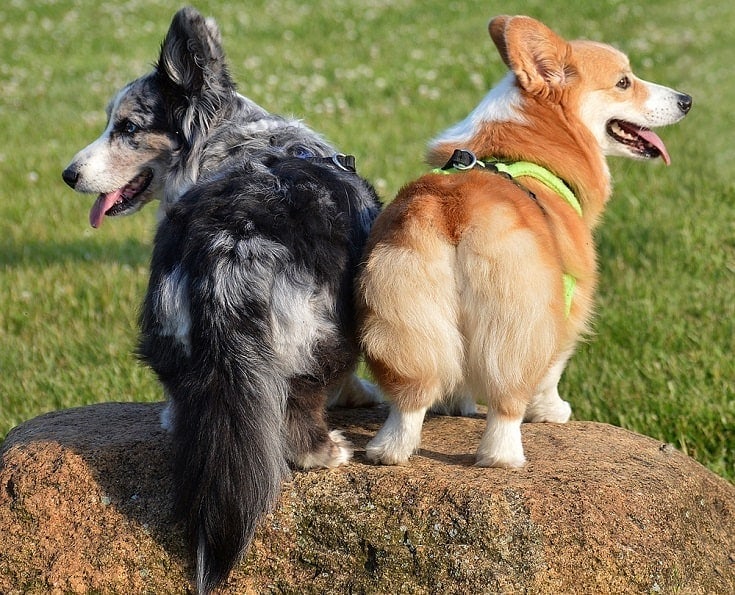 Dogs heavily rely on body language to communicate their emotions to other animals and humans around them. For example, dogs wag their tail when they are excited and tuck it between their legs when they are scared.

What else does a dog’s tail tell us? Since there are so many different breeds, one of the most defining characteristics to differentiate them is their tails.

The 9 Different Types of Dog Tails

A bobbed tail on a dog is similar to a dog not having a tail. They are either seemingly non-existent or very short. They can also be called a nub tail. It is often only a little bit of fatty tissue rather than a full tail with any kind of bone structure.

A similar tail to a bobbed tail form is one that is docked. A docked tail is one that has been surgical cut at birth instead of being naturally bobbed. It is often done for cosmetic reasons. Typically, it is an unnecessary danger for puppies to go through this surgery. Sometimes, though, working dogs will also get their tails docked for safety on the job.

Docking tails began back in Roman times when it was done to identify those dogs that belonged to a lower class. It became a cosmetic tradition after a while.

Common breeds that can get their tails docked as puppies include the Australian Cattle Dog, the Australian Shepherd, Brittany Spaniel, Dobermans, English Pointers, Jack Russell Terrier, and the Danish Swedish Farmdog.

As the variety of names would suggest, these kinds of tails curl back on themselves. Typically, their tails curl themselves toward the dog’s rump. These tails are often deceptively short and look like a single ring on the back of the dog. The corkscrew version of the tails is a little longer and will extend past the ring’s “closure.”

Dog breeds that commonly have the ring or corkscrew include Pugs, Basenjis, and Bulldogs.

Sickle tails are similar to the ringed tails, but with a little less curve. They begin to curve back up toward the dog and often point back toward the dog’s head without completing the ring. These tails are an upward semicircle, hence the “sickle” reference. They also tend to be softer and more flexible than many other kinds of tails.

Otter tails can be confused with several other tail variations that are similar. These kinds of tails are rounded and thick. The tail is often pointed down and might have a small C-shaped arch to it. These kinds of tails are common on water dogs because they can be used as a rudder while swimming and don’t weigh the dog down. They often taper to a blunt tip at the end.

The common breeds that have tails like these are Chesapeake Bay Retrievers, Labrador Retrievers, and Otterhounds.

A carrot tail is much how you would imagine it to be. They are quite short, although longer than a bobbed tail. They start as thicker at the base and are quite round, tapering to a tip at the end.

These tails are similar to the shape of the otter tail but much shorter and often thinner. They often belong to short hair breeds that have some kind of Terrier in their background. In the past, these breeds were often used for hunting underground. Although it seems callous, the farmer would often use the tail to pull the dogs back out of the holes when they approached for the kill.

Tufted tails are those that could have a wide variety of shapes, but the hair on the tip of the tail grows much faster than the hair closer to the body of the dog. It forms a tuft at the back end of the tail. It can be difficult to tell if a dog naturally has this kind of tail because they are often groomed to look this way.

A common breed that has these tails is the Poodle.

Gay tails can also be considered tufted tails because they commonly have a white tuft at the tip. They are often smaller and have a slight curve. Most of the dog breeds with a gay tail hold them horizontally from their body, and the tail stays about the same thickness from end to end.

Breeds that typically have a tail like this include Beagles, Border Collies, Cavalier King Charles Spaniels, and Wire Fox Terriers.

Saber tails are often found on dogs that have been used as herders in the past. They have a long, gentle curve and are commonly held quite low to the ground. Dogs that have these kinds of tails include breeds like Collies, Belgian Malinois, German Shepherds, Belgian Tervurens, and Cardigan Welsh Corgis if they are not docked at birth.

Can Dogs Eat Asparagus? Is Asparagus Safe for Dogs?

My Dog Ate Nutella! Here’s What to Do (Vet Answer)